The sweet smell of the game

Arc System Works has sat atop the anime subgenre of fighting games for some time now, a position that’s only strengthened with games like Dragon Ball FighterZ. With Guilty Gear Strive, the developer has meshed many of its best aspects into one: a gorgeous look, a compelling battle system, a solid roster, and excellent netcode.

That doesn’t mean it isn’t lacking in some areas, especially compared to other popular fighting games. But Guilty Gear Strive excels where it needs to; and while it’s not quite all-encompassing, it is also very good at what it does. It pits anime characters against each other in spectacular bouts filled with gorgeous effects, and—in what is one of its greatest strengths—makes it easy to do online.

Strive is the new platform for Guilty Gear moving forward, following Xrd Sign and its Revelator upgrades on the previous generation. It is still available on PlayStation 4 as well as PC, but I took the chance to see what a next-gen fighting game would look like on the PlayStation 5. 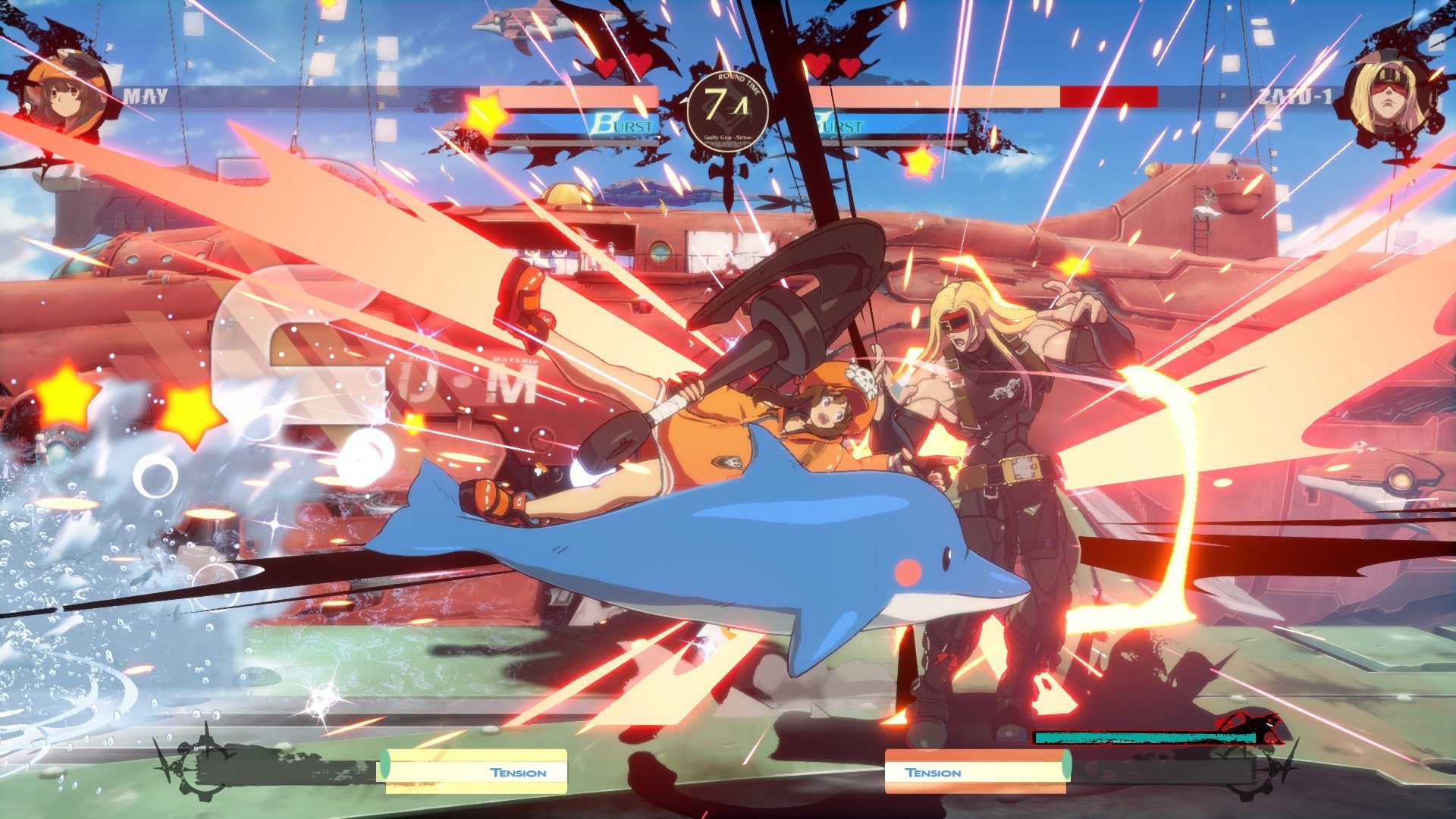 The starting roster of 15 brings a good deal of variety to the table, too. It’s fairly straightforward with only two newcomers, but both the return of an older character in Anji and the retooling of various characters’ kits offer up new looks and ways to play old standards. Ramlethal quickly became my main; she has big swords, good attacks, and easily suited my playstyle of fishing around in the neutral space for hits and punishing headstrong opponents. But even characters like May and Potemkin, who I’ve bounced off in the past, were drawing me in this time around in Strive.

As for the battle system, it gets complicated here. Guilty Gear is sometimes notorious, though not as much as other anime fighters, for having more complex mechanics to think about. In Guilty Gear Strive, some have returned and some have gone away. I’m writing this review more for the fighting game-interested rather than the fighting game-fluent; while the removal of Dead-Angle Attacks, changes to Gatling combos, and the addition of Wall Breaks are one thing to the latter group, the jargon might go over the head of the former.

Wall Breaks are the most visible change, and they’re overall an interesting addition. What it means for competitive play is one thing, but at the average level, I’ve seen it as a reward for a good combo. It allows for a reset to neutral ground, with a momentum advantage for the player who lands the Wall Break, and it also looks visually cool.

As for the overall systems, Guilty Gear Strive does feel more approachable than previous games. Systems have been streamlined, options are a bit clearer, and overall, this isn’t going to feel as overwhelming up-front. That’s not to say you can’t still get rocked by a Sol Badguy player while trying to climb the matchmaking towers, but the on-ramp is a bit smoother than it’s felt in the past.

Missions help a bit with this, though they make a trade-off of sorts. There are a lot of very situational and in-depth tutorials designed to teach players everything, from the fundamentals of Guilty Gear (what’s a Roman Cancel, how to use Faultless Defense) to more intricate and demanding tasks (cancelling a Roman Cancel). While it’s great for getting up to speed, I wish there had been a little more focus on character-specific combos. It’s a minor thing that the community usually solves, but I got used to having them as interactive warm-ups before I played.

There are a few other places where Guilty Gear Strive feels leaner than other fighting games as well. Its Story Mode is essentially a long movie, and though I really enjoy the interactive lore timeline that lets you read up on all the deep history of the series, it made single-player options feel a bit limited. There is cosmetic progression with your fight money, which you can use to fish for things like trailers, concept art, music, and attire for your online avatar.

And while the lobbies may be better, they’re still reminiscent of what the old, maligned lobbies were. Having stations, rematching, and Player Match options are all great, but pieces of this still feel clunky. Lobbies are at the very least functional, and get you to the star of the show: the actual online play.

It feels a little weird to be saying this, but the strength of the online play might be worth it alone for Guilty Gear Strive. I’ve played fighting games online in a lot of ways: on different platforms, over third-party apps, connecting to random servers and getting walloped. Guilty Gear Strive‘s rollback netcode is smooth and surprisingly capable. For one of my evening rumble sessions with another reviewer, I tested out how the Wi-Fi held up—and even crossing many state lines, we had a solid connection with literally one or two odd hitches across several matches. 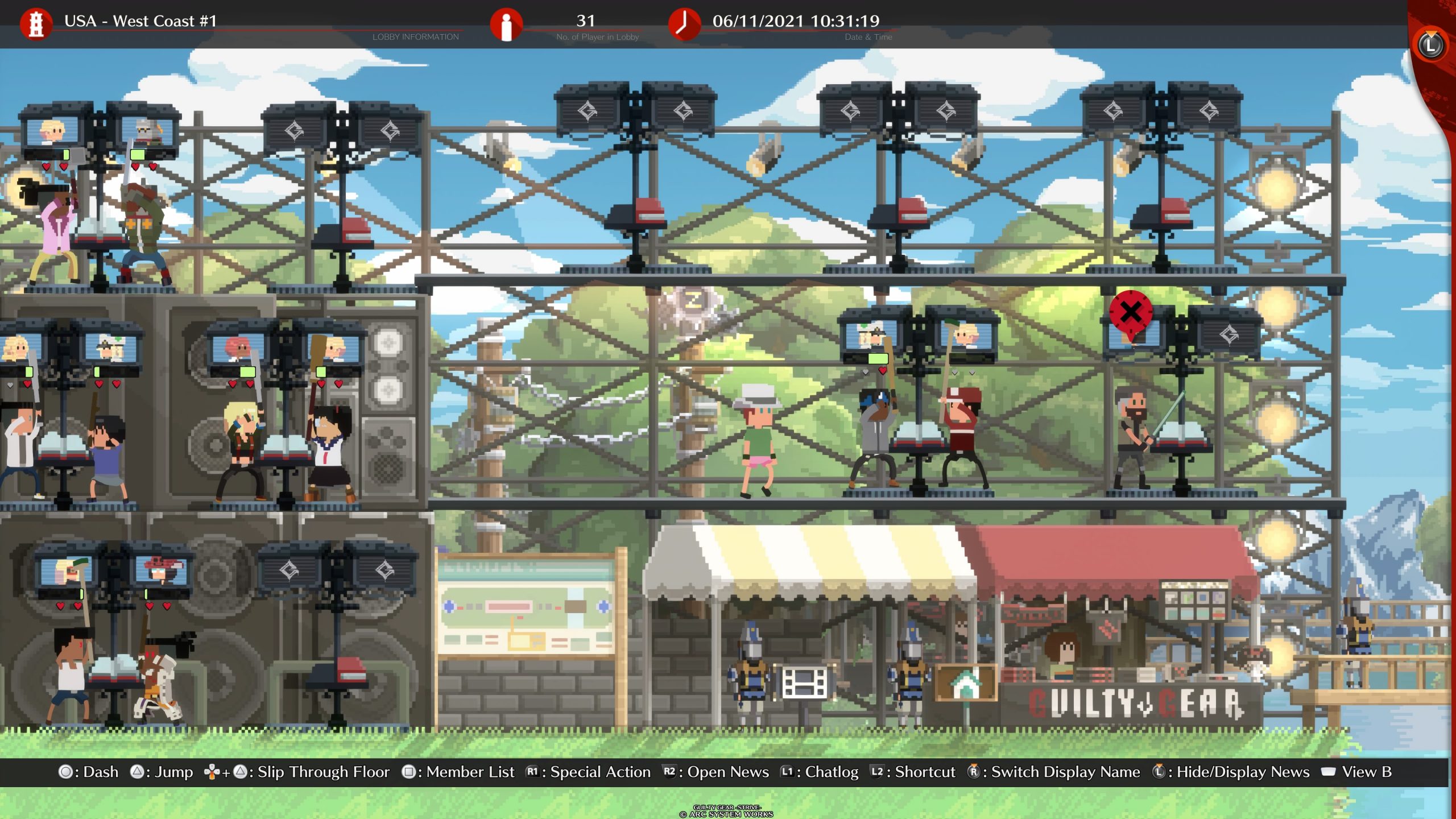 Online alone can’t make a game, but it can accentuate what’s already there, and that’s the dual-pronged strength of Guilty Gear Strive. It is a fundamentally solid, fun game to play against other people, and playing it online doesn’t feel like settling for a lesser experience to in-person brawls. Netcode has done this before, reviving several other games including a previous Guilty Gear game in the online scene, but this needs to be a priority moving forward, especially as the pandemic made it so clear how important netcode can be to a game’s long-term viability.

It might lack in some areas compared to fighting games with larger suites of features or options for those who aren’t looking for a competitive experience. Guilty Gear Strive is absolutely that: this is a fighting game you get if you want to play against other people, rather than play through a cinematic campaign or set of CPU challenges.

As a competitive fighting game though, it’s one I keep coming back to and thinking about. Guilty Gear’s cast of characters has always been unique and memorable, and they’re on excellent display here. The fighting is exciting, compelling, approachable, with enough depth to keep working and refining what I do. And its online play makes it ridiculously easy to match up against anyone, without having to think about bad connections ruining our good times, even if the lobbies are still… Let’s call them quirky.

If I was looking for an on-ramp to understanding Guilty Gear or even one-on-one anime fighters, this is the game to do it with; and what’s here looks ready to act as a platform for more to come, as there will no doubt be balance changes and new characters to come. I can lament what it might be missing, but Guilty Gear Strive is also what I needed right now: a good, solid, very online-capable fighting game with plenty of big swords, charging dolphins, and doctors with questionable credentials to go around.