Lag of the Rings

I’ve read your complaints about my Guardians of Middle-earth impressions post. It’s true that I am no Lord of the Things and I often confuse MOBA with Boba tea, but, nonetheless, I have put some time into GoMe (GO ME!!!) and have some serious thoughts on the game that should speak to fans and non-fans of LotR and MOBAs alike. 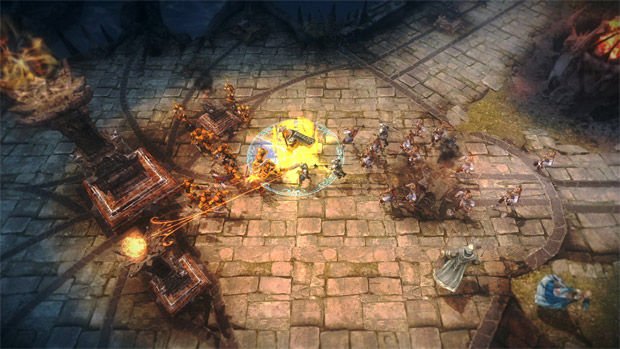 Massive Online Battle Arenas, such as DOTA 2 and League of Legends, are built upon two things: clicking and communication. Taking the genre away from PC and plopping it onto console downloadable services is a mighty task considering that A) you can no longer click and B) hardly anyone communicates online anymore, due to an increasing amount of headsets lost and poo brains that no one wants to interact with. Monolith Productions can only get one of these aspects right, but I don’t think that will be enough to sustain GoMe’s community for long.

The MOBA is an offshoot of real-time strategy games, where teams of players defend a base, control a single hero, and push toward the enemy’s base by knocking down high-powered towers. From a distance, it looks like an RTS for dummies. Only through play do you learn the nuances that make these games exciting: Timing your attacks, managing hit and runs on towers, and knowing when to let your AI controlled ground troops (or creeps) do the dirty work for you.

GoMe is a far more accessible entry in this sub-genre due to its controls and the removal of an in-game item store. Having attacks mapped to the right trigger, abilities correlating to face buttons, and direct movement via the thumbstick makes for a much smoother, intuitive experience. I always felt awkward playing DOTA 2 because of the mouse and keyboard controls. This new setup makes me feel comfortable and closer to the action. Likewise, I’m a fan of removing the item store elements which provides such a steep learning curve in other MOBAs.

These game-changing buffs have been replaced by GoMe’s exhaustive loadout options that are just as poorly explained and complicated as an item shop, but at least you won’t have to think about it once a match starts. You’ll purchase potions, equip a special ability (such as heal or a speed boost), and craft a belt that unlocks passive buffs as you level-up in a match. Thankfully, each character has a default loadout so you can stick to that until you discover you want to main Grumbledorf or Smoogles. 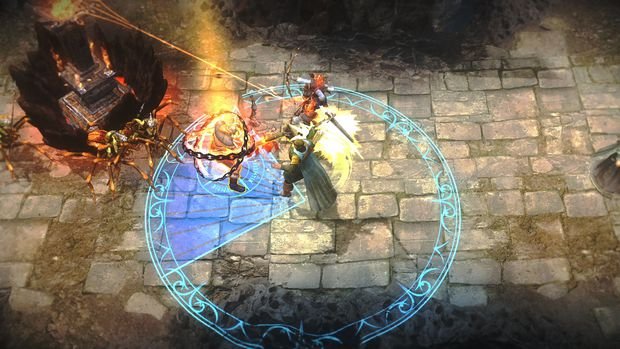 The controls are complemented by a fantastic UI that succinctly conveys information without crowding the screen. I always knew the reach of my attacks, the placement of my towers, and the cooldown on my abilities. However, the the tiny mini-map seems like a huge oversight when you consider the importance of teamwork. Winning a game of GoMe is largely dependent on covering the three lanes of a map (there is a one-lane map option but it’s a tiresome, ability-spamfest). The mini-map is so small that I couldn’t always tell where my teammates were or if they needed help. Just having an option to enlarge the map would have been a great help [I couldn’t find one nor could anyone I asked].

This feeds into a much larger problem the game has: It doesn’t provide incentives for players to work together. I can only imagine how brilliant a console MOBA could be with Battlefield 3’s experience system that rewards those that play the game correctly. With no guiding hand and rather bare bones tutorials, the majority of those I played with had no idea how to play the game and frequently made our team lose due to their incompetence. I’m writing this review nearly two weeks after public release and I still see players that don’t bother to communicate or help. You can ping players on the minimap to help you, but it’s hardly noticeable. GoMe doesn’t provide the feedback or rewards that would make it an accessible entry point for the genre. That being said, I’d recommend GoMe over any of its competitors, if you are interested in seeing what a MOBA is all about. 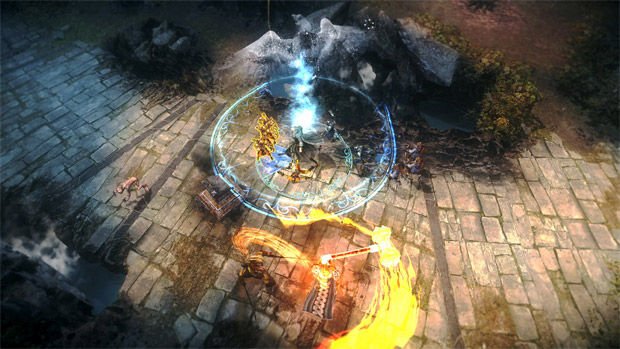 In my 20+ or so matches of GoMe, I’ve had one of the most miserable online experiences in recent memory. Nearly every match suffered from horrendous lag. Almost every match had a disconnect — crippling when you consider most matches start with 4-6 human players (AI filling the other roles), and I was disconnected from the game at least a quarter of the time. These issues go far beyond “a rough launch”, since it’s two weeks later and finding a good game is a rarity. Nevermind that you’ll have to wait upwards of two minutes to join a game and even longer for an all human match.

As with Gotham City Impostors, Monolith and Warner Brothers have once again managed to create a fun, original entry in a popular genre, only to muck it up with bad netcode and a poor community effort. When you manage to get a properly functioning game with human players that communicate, Guardians of Middle-earth is a total blast. Learning each class’s strengths and weaknesses is great fun but that fun quickly fades away when you put up with clueless players, random disconnects, and a player base that is reluctant to communicate. Like Gotham City Impostors, GoMe may work out its kinks, find a dedicated fanbase, and become an amazing online game. Even then, I have my doubts that it will be properly supported (see again: Gotham City Impostors).

If you are craving some LotR action or want to play a bold new MOBA, there is a lot to like about Guardians of Middle-earth. It’s a shame that its lackluster community and frustrating technical issues get in the way of that.