After a number of misses from its competition, last year Harmonix and MTV Games proved that it was possible to do a band-specific music game “right.” The Beatles: Rock Band was an incredible journey through the band’s career, approaching the material with tact, and a reverence for the music and people behind it not seen before in games. It was proof that with a little love, a game that focused on the music and history of a single group of musicians could not only be viable, but beautiful.

Of course, it helped that it was designed around a band that is widely regarded as one of the most influential and beloved rock groups of all time. What other group, if any, could Harmonix and MTV follow it up with? Their answer, as they revealed in December of last year, was Green Day. While the pop punk band — whose career has spanned over 20 years — doesn’t quite hold the same weight as the Fab Four, a quick walk through any shopping mall is testament to the band’s popularity.

The argument as to whether Green Day “deserves” its own game is pointless, because here it is, whether you like or not. But is it any good? Depending on which side of the Green Day “love/hate” fence you fall on, the answer is exactly what you’d expect it to be.

For the fan of Green Day and Rock Band, Green Day: Rock Band is a bit of a dream come true. After years of the band’s music not appearing in any music game, MTV Games and Harmonix seem to have held the magic key the band’s hearts, exclusively securing the group’s tunes for its titles. That key may have been agreeing to grant the band it’s own game; whatever the reason, the disc is a solid package of just about every tune a Green Day fan would want to play in a music game.

Unlike The Beatles: Rock Band, the game doesn’t follow the same kind of career path, instead breaking up Green Day’s history into three larger chunks represented by three venues. “The Warehouse” starts things off; songs from the band’s major label debut, Dookie, are played here. “Milton Keynes” — the venue made popular in the group’s home concert video, Bullet in a Bible — will have you focusing on the music of American Idiot, Insomnia, Nimrod, and Warning. Finally, the entire thing culminates with the “Fox Theater Venue,” where you’ll be able to play the band’s latest album, 21st Century Breakdown, in its entirety.

In all, the game contains 47 Green Day tracks on the disc, including every track off of Dookie and American Idiot. 21st Century Breakdown can be played beginning to end as well, provided six of the album’s tracks are downloaded from the Rock Band Music Store. Whether or not you’ll enjoy playing these songs is dependent on a few things, most notably (and most obviously) how much you like Green Day. If you’re a fan, rocking through “Welcome to Paradise” or singing along through the more contemplative “Wake Me Up When September Ends” will be a joy. Non-fans or those on the fence about the tracks, however, shouldn’t write them off. 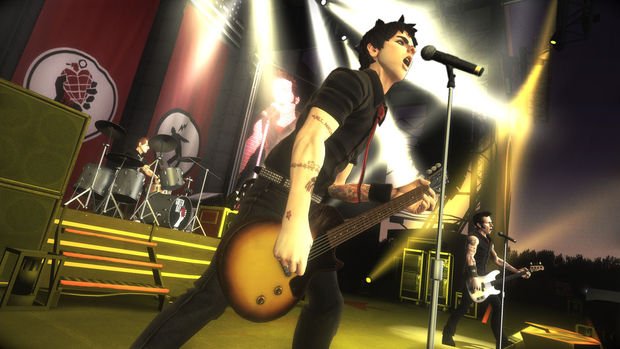 It’s true that Green Day aren’t the most technically proficient or imaginative songwriters of this generation, but there’s a lot to be said for simply being able to craft a memorable song, regardless of where it was derived. As a non-fan, I was surprised at how many tracks I was familiar with; it was absolutely shocking (and a bit frightening) that I knew many of the song’s lyrics (if not simply the melodies) without even having to look at game’s screen.

While the overall difficulty of the game probably won’t have any hardcore players lighting up YouTube with impressive “FULL COMBO OMFG” videos, many of the tracks will require competent playing on the harder difficulties. This is particularly notable on the bass and drum tracks. Mike Durnt’s poppy bass lines might have you all over the fret board, and drummer Tre Cool has enough fun with his kit to keep your hands busy.

Unfortunately, Green Day’s “weaknesses” (if you could call them that) are noticeable in a few areas. It becomes fairly obvious early on that guitarist/vocalist Billy Joe Armstrong has only a small repertoire of six-string tricks in his bag, relying on few chords and repeating strum patterns track after track. While in songwriting this isn’t an issue — an artist doesn’t need thousands of colors to paint a beautiful picture — the guitar gameplay suffers a bit for it as it can become repetitive and predictable. 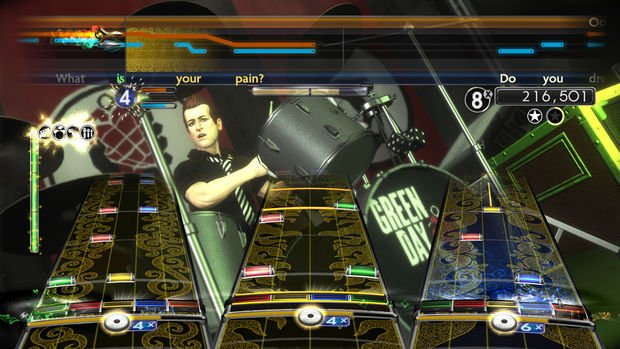 The game also ports over the vocal harmony features introduced in The Beatles, although they’re nowhere near put to as good use here. While The Beatles provided a master class is harmony, what’s presented in most of Green Day’s catalog is more like a beginners course. It’s true that as the band’s career progress, they did get a bit more ambitious in the studio, but there’s nothing here in the harmonies can compares to even The Beatles’ earliest works.

Overall, the band is faithfully re-created with some incredible motion capture that really nails the vibe of the band and its live shows. There’s some great nods and small details that fans will notice, like movement and tattoo details that Harmonix obviously took note of when designing the look. The “Milton Keynes” and “Fox Theater” have some great touches going on in terms of lighting, crowd interaction, and set design, as well.

So it’s not entirely fair to say that Green Day: Rock Band feels “phoned in,” but it really doesn’t feel like as much attention and work went into this as The Beatles. For instance, whereas The Beatles featured a handful of venues plus song-specific “Dreamscapes,” Green Day only features the three venues and only changes in minor details for many songs (in others there’s nothing particularly notable at all). Even each of the character models only wear up to three outfits a piece throughout the entire game; The Beatles: Rock Band had the Fab Four not only changing looks from era to era, but sometimes from song to song.

The game’s career progression is also lacking when compared to the previous single-band effort. The title kicks off with an incredible animated introduction video (designed by MK12, responsible for The Beatles cinematics, as well), but that’s it. There are no transition videos here between venues, and nothing to really help the player understand or appreciate the arc of the band’s career. 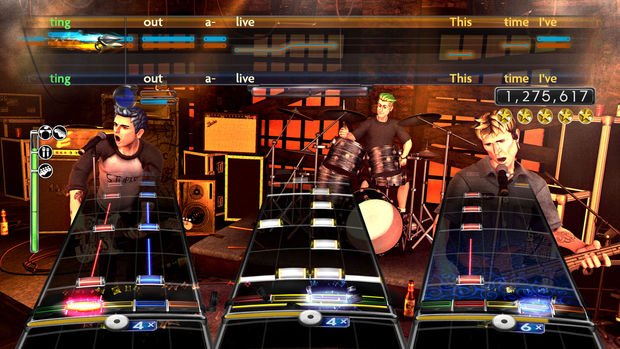 There are plenty of unlockables for fans to acquire, from photos to archival video footage, but even that seems a bit lacking. I wouldn’t call myself a huge Green Day fan, but I was astounded by how many of the unlockable images I recognized — some of them are even taken directly from album liner notes or well-known publicity photos. This is the kind of stuff that fans will probably eat up; some of the older photos and vids are a nice, nostalgic trip down memory lane. But it’s a shame that the extras don’t dig a bit deeper, providing more original material that would make the game package more appealing.

Because all of the tracks can be exported to your hard drive (on Xbox 360 and PS3) for playing in Rock Band 1, 2, and the forthcoming 3, you could look at Green Day: Rock Band as a large track pack in a fancy bundle. It’s a decent deal if you’re interested in all or most of the songs on the disc — it’ll cost you $60 for the game, plus an addition $10 to export the tracks. But if you’re only looking to play a handful of the tracks, you’re out of luck, and the game won’t quite live up to its value.

Bottom line here is what you’d expect — Green Day: Rock Band is a must-have for fans of the band and Rock Band. Even if you’re not the biggest fan and the very thought of Green Day doesn’t make you want to rupture your own ear drums with a screwdriver, there are some great tracks here you’ll want to add to your collection. In the end, though, the package doesn’t reach the bar raised by Harmonix’s first single-band outing.

[Note: Add 2 points if you’ve ripped a picture of Billie Joe out of SPIN magazine to put up in your locker; remove 7.5 points if you absolutely despise Green Day.]