FlingSmash introduces you to the varicolored world of Zip, a curious little critter who looks like a cross between a tropical fruit and a tennis ball. When his home, Suthon Island, is assaulted by the foreboding villain Omminus, it’s up to you to use the Wii Remote and Wii Motion Plus to smack, smash, and fling Zip through various stages collecting items and defeating dark minions. (The game can also be played as or with a second player as Pip, Zip’s female counterpart; both characters are functionally identical, except one presumably has a vagina.)

It’s a game that requires the Wii MotionPlus add-on for the Wii Remote. This shouldn’t be an issue, as the new Wii Remote Plus — Nintendo’s new controller that combines MotionPlus with a Remote — ships with every copy of the game. The idea is to use the Remote to carefully fling Zip in a desired direction — like a tennis or ping-pong ball — generally to smash through blocks, elude enemies, or collect items. 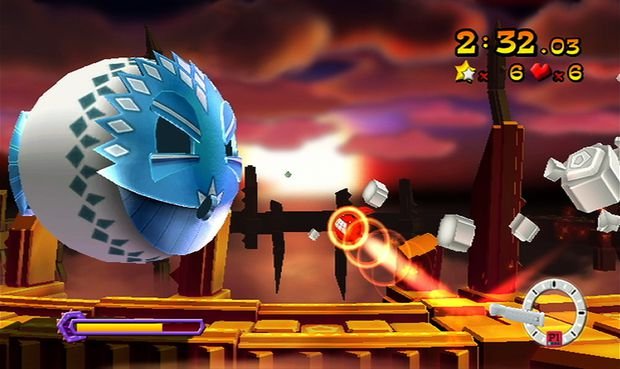 Truly, FlingSmash is a showpiece for how accurate the Wii MotionPlus is, and it couldn’t come at a better time, given the recent release of Nintendo’s competitors’ motion control peripherals. On the bottom screen, the game displays a Wii Remote and its current direction relative to your television. Move your wrist slightly in any direction and the on-screen Wii Remote will shift; it’s truly one-to-one, and it’s rather stunning how accurately it can pick up even the most delicate movements.

The on-screen indicator isn’t just for boasting about the tech, though. Accurate and well-placed swings are critical to success in FlingSmash. It’s all about lining up shots (you can stop Zip from moving mid-flight, and he’ll bounce in place waiting for your swing), being patient, and flicking your wrist gently and precisely. There’s no need for wild, fast, or hard swings here. In fact, the game discourages it — swinging the controller wildly will likely lead to misplaced smashes, heading down wrong paths, and general controller-tossing frustration.

Despite its accuracy, FlingSmash’s controls can be a point of irritation from time to time. Because the “smash” mechanic is always “on,” sometimes moving your wrist down (with the intention to then smash Zip up) will result in a smash… in the wrong direction. This gets exceptionally irksome as you’re thwarted while you work your hardest to make make sure you’re moving Zip through the right passageways through each level, and trying to grab the items you’ll need to unlock later stages. 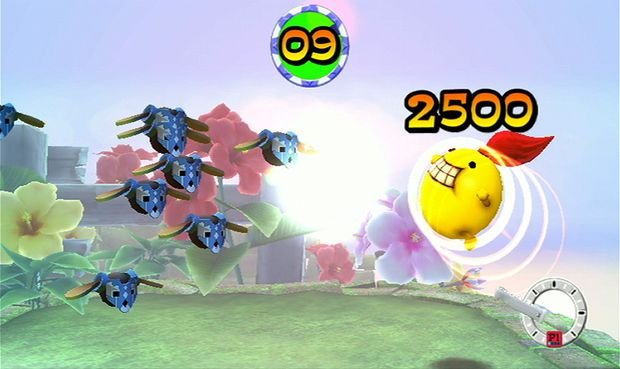 Most of the game’s levels will have you moving Zip from right to left, with the game screen pushing you on as you go. There’s no slowing down, as getting stuck behind will lead you to get eaten up by the Hydracoil, a dragon-like creature who thinks you’re a tasty melon or something. It’s rare that you’ll die, as getting through stages in FlingSmash is relatively easy; the real challenge will be collecting all of the power ups and items for a high score. But even though a level can be completed, that doesn’t mean you won’t be forced to play it again, as truly completing the level means you’ll collect three gold medals, which earns you a sacred pearl. (These are required to unlock bosses for each world.) This is a bit of a pain in the tail, as when and where you’ll find the coins is completely different for each stage. Sometimes they’ll be right out in the open, other times they’ll be hidden. Some stages seemingly only have exactly three coins, others more.

Because you’re constantly moving towards the end of the level, if you miss a coin, there’s no way to go back and get it without restarting a level. This gets particularly frustrating when the game misinterprets a small wrist movement as a smash and sends Zip careening in a direction opposite of a coin. Because it’s seemingly impossible to know whether you’ll find more later in the stage, missing the first coin sometimes means you’ve thrown away your opportunity to truly “clear” the stage. It didn’t happen often, but I spent a few times replaying stages because of this, which was annoying since I had already successfully seen it through to the end only moments ago.

That particular aggravation aside (and it may just be my play style; I don’t like being forced to replay stages), FlingSmash is generally a blast to play. There’s something fulfilling about smashing Zip — or anything, for that matter — across a game screen. The simple act of flicking your wrist, combined with the “tennis ball against a racket” noise that emits from the Remote’s speaker is unusually satisfying. It also helps that the world of FlingSmash is bright, colorful, and fun from start to finish. The game throws a surprising amount of variety in terms of worlds and gameplay variation, like changing Zip’s size and mass in a few levels, which affects the feel of the controls. Each world also ends in a boss battle; while most of them are fairly easy to defeat, they’re a nice diversion from the standard side-scrolling stages. 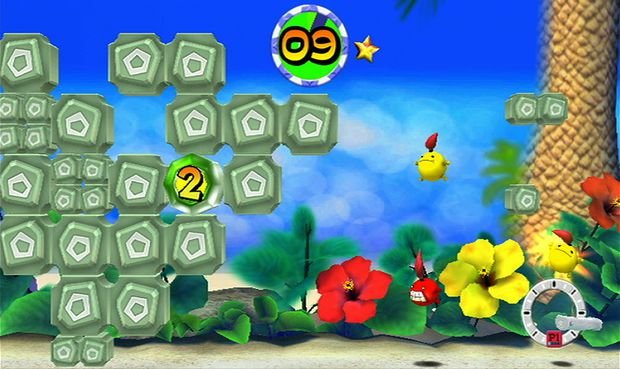 Perhaps the biggest problem is that it’s over all too quickly. With only a small handful of worlds, you can probably see them all in a single session spanning only a few hours. There is some replay value in that you’re ranked on your score, if you’re into that kind of thing. Do well enough on each stage, and you’ll unlock then mini-games, some of which are fun, but not a single one is noteworthy.

FlingSmash is a polished, enjoyable little title based around a novel concept, one that seems like it was initially designed to show off the precision of the Wii MotionPlus outside of Wii Sports Resort. The packed in Wii Remote Plus adds quite a bit of value to the package, making it a no-brainer for folks who need another controller.  But the lack of content, despite some clever ideas, makes it feel like it would have been better suited for a WiiWare title at a downloadable game price.