I’m not a bad man. Sure, I might rule over billions of miserable souls with an iron fist. I confess that my greatest dream is to conquer and enslave the entire galaxy. I admit that when asked who my greatest heroes are, I list the most bloodthirsty, despicable dictators in the history of the universe. But really, I’ve got an unfair reputation.

No doubt in the annals of history I will be remembered as the aggressor in the violent Empire-Amoeba War. I mean, I did make some off-color jokes about them. But is a fat joke about their massive genome really that bad? Well, I paid for it. The galaxy has been at war for a century, and there is no end in sight.

Endless Space is a massive 4X title where amoebas can beat you up and aggressive bird-men can be excellent trading partners. There’s also an entire civilization that seems to be based off of Rimmerworld. Give it a chance and it will eat up all of your time. 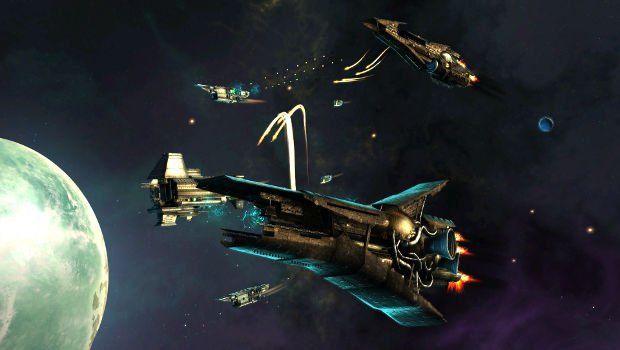 On the incredibly rare occasions when a new 4X title is announced, I prepare for the worst. I quickly complete any outstanding commitments, I say goodbye to friends and loved ones, and I purchase comfortable trousers with a generous amount of elastic. On the even rarer occasions when it’s set in the cold, dark expanse of space, I’m a goner. Since the heady days of Masters of Orion, this has been a truth. I’ve been playing Galactic Civilizations II for six years. Some might call it a problem. I call it being bloody awesome.

As July got closer and the launch of Endless Space was looming, I anticipated the continuation of the cycle: Explore, expand, exploit, exterminate. In that regard, Endless Space had me covered. It’s got plenty of all four of those things and it’s all neatly contained in a lovely, polished package.

The first step to conquering the galaxy is creating the galactic playground and selecting the race you will carry to glory or disgrace. Not only can you choose from a broad selection of map shapes and sizes, you can even define its general age. This plays an important role, as it dictates the types of stars, and thus planets, which will be available for colonization.

Eight races are provided, each with their own distinct background, aesthetic, and traits. The Horatio — the aforementioned Rimmerworld chaps — are all clones of one single man: Horatio. He was a wealthy eccentric who left the United Empire to found a race of perfect beings in his own image. Then there’s the United Empire itself, a slightly unpleasant monarchy essentially run by aristocratic big business owners. There is also the philosophical Amoeba, the avian Hissho, and some robots — both good and evil. Thankfully there’s a robust custom race editor which gives players access to almost 100 traits to choose from. 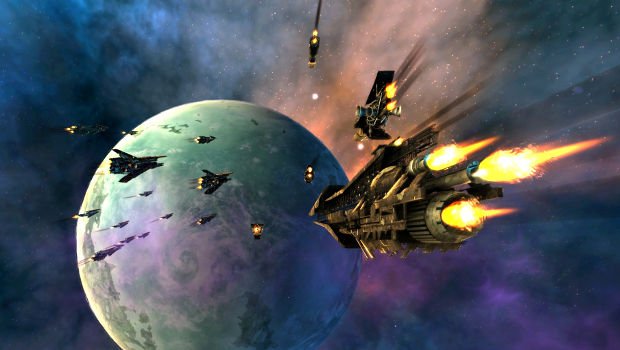 Galaxies are appropriately stunning masses of stars and worlds ripe for conquering and colonizing. Zoomed in, a spiderweb of star lanes connects the galaxy; the borders of empires add an extra splash of color to the inky blackness otherwise only lit up by stars. Taking a look at big picture reveals a beautiful galaxy, now lush with color, and makes your giant empire look a lot more insignificant.

The title’s simple, clean UI will be a revelation for those previously intimidated by the complex systems of other menu-heavy 4X experiences. Each menu has an associated tutorial which explains all the various options in a good amount of detail, while not getting in the way of players who just want to get stuck in.

Clicking on worlds and star systems brings up all the information you could possibly need, easily explained, simply presented. It makes running an empire a surmountable affair. You set the production — be it building projects or ships — for entire systems rather on a world-by-world basis, which never makes your empire feel too unwieldy. However, while the state of the UI is commendable, it is not without its flaws. Sometimes information is withheld, or two pop-ups appear to essentially tell you the same thing, one vaguely, the other indirectly. It’s just weird.

I doubt that Amplitude Studios would have been able to retain such an appealing interface if the game had the same level of micromanagement that the genre is known for. Every planet seems to work a little bit too well, to be honest. Colonizing a planet comprised mainly of magma shouldn’t be an easy feat, but lay down a couple of ridiculously overpowered buildings and boom, you’ve got a sweltering hot paradise filled with people who love their leader for no good reason. 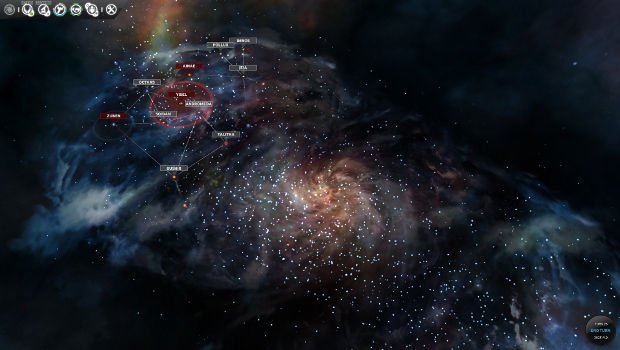 The struggle of creating a strong economy and juggling the desires of the populous with the desire for conquest and expansion seems remarkably absent. For some that might be a boon, no longer will they have to pour over screens, menus, charts, and graphs; but for me these systems would normally tell the story of my rule. Endless Space is smooth and simple, but it feels a bit empty.

This extends to the various races, as well. On paper they are interesting, but interactions with them are terribly limited. Dealing with the diplomatic, benevolent Amoeba is pretty much the same as dealing with the robotic Sowers, synthetic lifeforms which consider themselves galactic caretakers. They will request minerals, make alliances and very occasionally go to war. The main differences are aesthetic, and while each race has a series of traits that distinguishes it from the opposing empires, it’s not particularly noticeable unless you are actually playing them. The one race that does stand out are the Cravers. They consume the planets they conquer, and must continually expand to survive. Due to this, they are in a continual state of war with the other powers. For a truly aggressive game, these are the guys to pick.

One way that races do set themselves apart is through the technology tree. It’s appropriately vast and conveniently split into four smaller trees focusing on warfare; exploration and colonizing; science and commerce; and social improvements. They are all laid out logically, and it’s easy to plan for the future. Unfortunately, they are extremely dry.

Endless Space takes itself incredibly seriously and every research explanation takes pride in obfuscation. Sometimes it feels like I’m reading snippets from a science journal instead of a game. Barring a couple of unique research opportunities, the trees are identical for every race. Of course, there are lots of different avenues for crafting your society, so races will often have completely different weapons and technology. 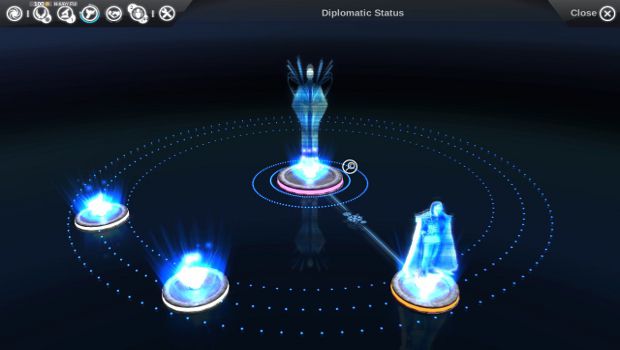 The depth of the tech tree makes up for a lot of its weaknesses. Seeing all this potential laid out before you on your first turn is both intimidating and exciting. There are a few game changers too. Getting laser-based weapons before the other races can make you unstoppable, while unlocking the secrets of advanced space travel allows you to say goodbye to star lanes and hello to mapping the galaxy.

For the conquest-minded player, there’s a lot to recommend. In a genre where combat is usually extremely hands off, Endless Space is a breath of fresh air. There’s still a significant amount of automation, but you never feel like you’re taking a back seat during conflict, you’re just being a commander rather than a grunt. Space battles are split into five phases, with the first and last merely being the arrival of the fleet and the end of the battle, respectively. The three core phases are long range, medium range, and melee. Right from the get go, you can select actions for those phases from a deck. The abilities in your deck are dictated by technology and the traits of the hero unit commanding the fleet, should you have one. If the abilities you put into play counteract the ones your foe uses, a much smaller, inferior fleet can get the better of a dangerous enemy.

Battles only last for two minutes, and they play out in stimulating cinematic scenes. It’s too bad that it’s pretty much the same thing over and over again. Two fleets arrive, they perform broadside attacks for two minutes, usually someone wins. There are no vessels flying around the enemy fleet, harassing them, no ships going for head on attacks, no visual surprises at all. It’s still, I believe, one of the best ways to present fleet battles in a 4X space title, but I can’t help but feel that it came so far only to falter near the end.

Constructing fleets is a painless affair, and once you have decided on your latest vessel, upgrading it throughout the game is as simple as pressing a button. You’re only limited by the base ship’s tonnage and the technology you’ve unlocked. There are types of vessels that are currently too easy to construct and defeat enemy fleets with, even if they are more advanced. With ships only being able to focus on one target, there isn’t much point in making anything other than loads of laser ships if all you want to do is achieve an easy victory. Each race comes with their own unique style, and all of them look pretty stunning; from the aesthetically pleasing crafts of the Horatio, to the intimidating, yet utilitarian, fleets of the United Empire. It’s just a shame that you can’t tweak their visual design. 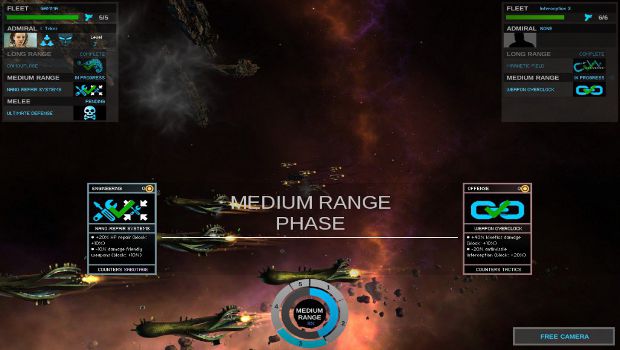 It doesn’t help that enemy AI is appallingly bad and it’s distressingly easy to just make cheap fleets that can demolish everything. The opposition forces can’t figure out how to build ships to counter yours, so they rarely pose a challenge. Play the game as intended and war is wonderful; play it to win and it quickly becomes far too easy.

In shorter games, Endless Space is a joy to play. Sure, it’s a bit too easy and the races are a bit hollow, but these titles have always been more about making your own stories than having the game make them for you. You can make it tough if you want to. You can ascribe personalities to races should you wish. The first hundred turns or so (in a large galaxy) have you rapidly expanding your dominion, traversing stunning galaxies, and doing a hell of a lot of experimentation. Once you reach the end game, or once the map has been fully explored and you’ve encountered all your opponents, the sheen starts to come off it. I felt like I was going through the motions. Once it’s over, though, I still feel that itch to start up a new game.

It’s a complete package, but there’s still some work to be done. I anticipate plenty of tweaks and patches, and I hope for new additions. There’s a strong and vocal community behind the game, and no doubt many of them will provide players with countless inventive mods. Like so many 4X games, its long-term success will depend on the modders and the community.

As it stands now, it’s a must for anyone looking to experience the genre for the first time; it’s very newcomer friendly, but old hats might find it a bit wanting. Its longevity may also be increased by the multiplayer mode, but I personally don’t have the patience for all these people who take far too long to take their turn. On the whole, it’s more than worthy of your interest.

Endless Space has a lot of potential and manages to differentiate itself from other similar games. Caution is advised, however, as it could do with a lot more balance and a hell of a lot more personality. The former is far more likely to be fixed than the latter.