Touch controls will never be able to replace the accuracy and fluidity that can be achieved with a joystick, but of course, any CAVE fan knows this by now. The actual concern when approaching an iOS CAVE game is if the controls will get in the way of having fun.

If you are seeking to burn through the leaderboards or 1CC the game on Hell mode, you are approaching an uphill battle, but that’s only part of the problem with DoDonPachi Blissful Death. Even with the port’s flaws, there is still no denying it’s still one of CAVE’s strongest shmups.

Despite the awkward (but understandable) name change, this is DoDonPachi Dai Ou Jou. Originally released to arcades and PlayStation 2 in the early ’00s, it is thought of by CAVE fans as being one of the developer’s best efforts. If nothing else, it certainly set the tone and pace for what was to come from the then still-young Japanese developer. So, just because you are taking a chronological step back from recent iOS CAVE releases, including DoDonPachi Resurrection and Bug Princess, don’t fear that you will be shorthanded.

For those who have never played a DoDonPachi game, you are in for a treat as well as a steep learning curve. That learning curve doesn’t come from understanding the mechanics — which are very basic — but from adjusting to the series’ signature speed and imaginative enemy bullet patterns. More than any other CAVE title, there is an art to the way the enemies attack in this game. You’ll remember stages not from their backdrops but because of their memorable enemies and boss fights. Rarely are stages and enemy formations as thoughtfully composed in a shmup as in this one. 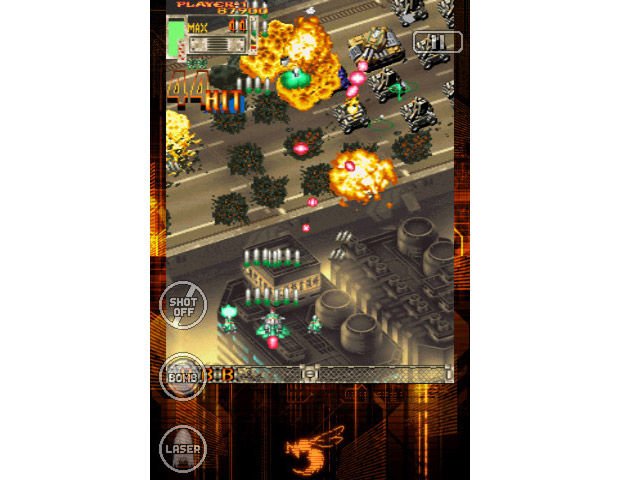 You may be getting only half the resolution of the arcade experience, but the frame rate is solid, unlike the rather shoddy PS2 port. The frame rate comes with a serious price, however: the game will not run on iPad 1, iPod Touch 3rd gen, or iPhone 3GS. Also, and here’s a bit of irony, several CAVE fans noticed that some intentional slowdown from the original isn’t present in this port (even though the Japan-only Xbox 360 port had it). Like past CAVE iOS releases, you can change button placement, screen size, and other options. There is a five-stage campaign, a practice mode, and four difficulty levels — the hardest (Hell) is pretty close to the arcade original.

DoDonPachi‘s futuristic sci-fi setting isn’t inspired in itself, but everything from the portraits of the cyber-dolls (uh?) that control your ship to the the elaborate bosses look fantastic. No one does sprite work like CAVE which makes it a shame you aren’t getting the full resolution. I can’t comment on how it scales to iPad, but please leave a comment below if you have experience with it. Despite the drop in video quality, the bullets and backgrounds are as bright as ever which is essential for a game this fast and populated with enemies.

You control your ship by guiding it with a finger and hitting side buttons to switch from laser to machine gun or to drop a bomb. More than any previous iOS shmups, I found that these controls became increasingly problematic the longer my session lasted. When played in brief bursts (one stage), the controls are adequate. However, playing from beginning to end is a difficult task, mostly because sliding your finger wildly across the screen isn’t easy. 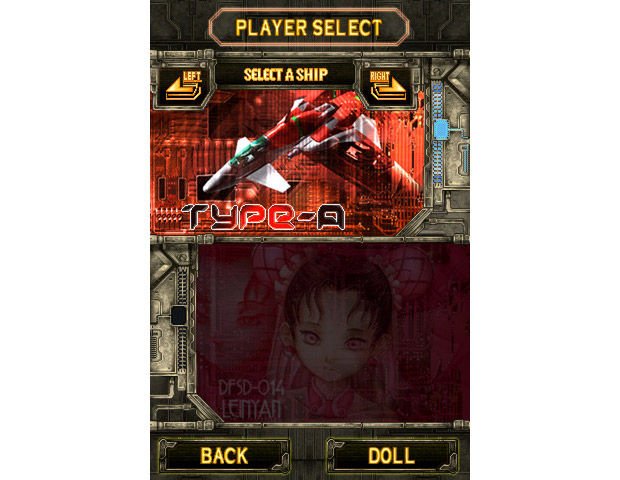 CAVE’s first iOS release, Espgaluda II, remains their best work on the platform because of two factors: the narrower playing range and the ship’s high sensitivity. In contrast, Blissful Death features a wide playing field and two ships that are very slow by comparison. I understand the reasoning behind this — I mean, which do you sacrifice? Precision to dodge bullets in boss fights or the ability to fly around the screen with ease?

As a CAVE fanatic who strives for 1CC playthroughs at arcades, I think precision is more important. However, on iOS I want speed because that makes the game more fun and approachable. As a result of the game’s low sensitivity, my finger grew increasingly uncomfortable until I decided to stop playing. It speaks volumes of the game’s quality that I return to it at all. It’d be nice if future CAVE releases would include sensitivity options.

As CAVE continues to port its games to iOS, it should be more cautious about how it adapts certain titles and whether some should be adapted at all. On one side is Espgaluda II, and on the other is the nightmare of porting the complex Guwange (available on Xbox Live Arcade and totally worth the money). Blissful Death falls somewhere between the two. Between the wide playing field, constant use of buttons (you need to switch to laser for large ships and bosses), and need to move across the screen frequently in later stages, iOS isn’t the ideal platform for Blissful Death. It works and is even fun at times, but only until the frustration sets in. 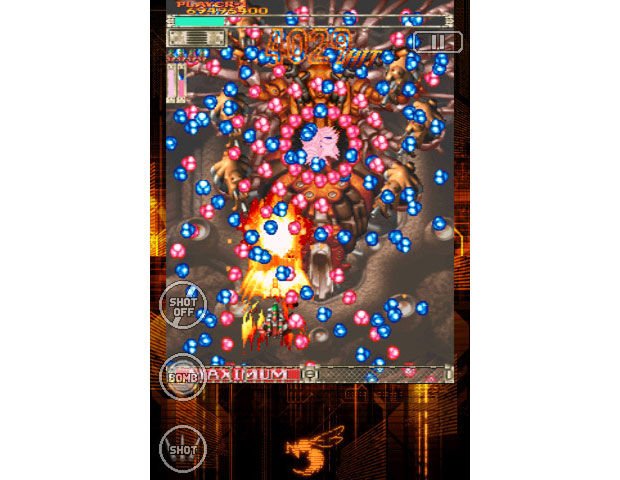 But I’m preaching to the choir here. Either you are on board with having a gimped, portable version of CAVE’s classics or you have no interest emulating an inferior experience. So, yes, the game can be fun in short bursts, but CAVE’s failure to re-tune the game for the platform keeps it from reaching the early heights of its Espgaluda II port, which, let’s be honest, was only so good because the original game was a better fit for the platform.

I don’t think you’d regret purchasing DoDonPachi Blissful Death, but I doubt it will feed your hunger for a proper arcade experience. If nothing else, CAVE has given Westerners a legitimate way to buy the game so they don’t feel so bad about emulating it on MAME, where this classic shines with a joystick and full resolution.