Downloadable content is a touchy subject among the vocal game playing community. While I personally think such content has its place, the piecemeal selling of a game risks becoming a tasteless endeavor — and videogame publishers have proven unafraid to exploit the practice to miserable extremes.

DLC Quest is a vision of depths no company has quite yet sunk to, but the scary thing about it is just how plausible it is. Though it satirizes the ridiculous idea of a game so excessively monetized you can’t even get character animations without paying, one can easily imagine rooms of suited executives, eagerly discussion such an idea.

This spoof of the videogame industry is cute, and funny enough to raise a few smiles. Deep down, however, there’s something very scary about it. One fears its ability to give some very rich men some very tacky ideas. 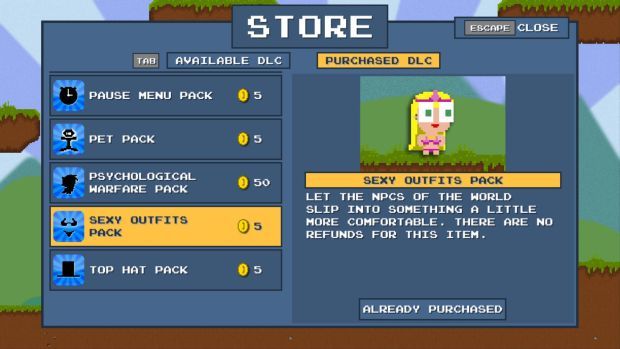 DLC Quest is an action-platformer with a very simple premise — defeat the bad guy and save the day. Light on story, lighter on the action, Quest exists solely as an excuse to drain your wallet and compel you to keep playing, for very little reward, just to spend more cash. In the wake of games like Final Fantasy: All the Bravest, this scenario rings particularly poignant. Fortunately, you don’t have to actually spend your real-life cash to buy all the fluff.

Currency is earned simply by navigating the environment to collect floating coins. When the game begins, you can’t even jump or walk left — like everything else in the game, such luxuries must be unlocked as extra content. You walk right, collect some coins, then talk to a shopkeeper to buy the necessary physical abilities. This sets the satirical nail in place for DLC Quest to hammer again and again. 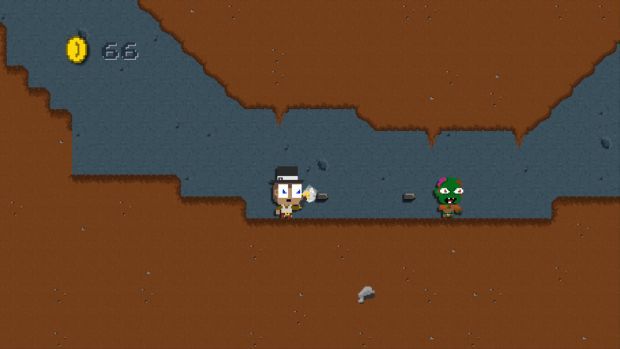 Need a sword? You can hammer “X” at a grindstone roughly 10,000 times, or you can buy a perk from the shopkeeper to speed up the process. Ledge too high? Collect enough scratch and acquire a double jump. Every new challenge is an excuse to offer a fresh piece of content, while hidden collectibles unlock optional DLC, such as “sexy” NPC costumes, a useless pet, and armor for the horse you never use.

While all this stuff is utterly useless, even more so than comparable items in the games it mocks, DLC Quest nevertheless nails the unsettling ease of which one’s desire to hoard crap can be exploited. I found myself nabbing every coin excitedly, eager to see what happens when I purchase the zombie pack, gleeful at the idea I could enable particle effects for such a low price. Like so many modern games, there’s little gameplay on offer, yet somehow I found myself needing all the abortive junk DLC Quest relentlessly offered. It may be a one-note joke, but it’s a joke that becomes more effective the more it uses the player as a continuous punchline. 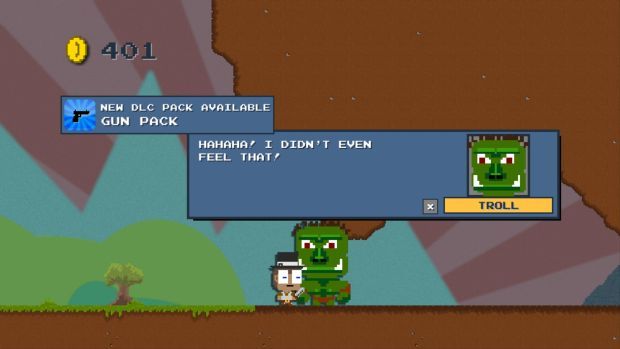 There are two campaigns on offer: DLC Quest and Live Freemium or Die. DLC is shorter, shallower, but gets the joke across with brevity and class. Freemium is longer and more focused on gameplay, with funnier jokes, but drags in places and gets more annoying as it continues. Together, they’re both worth playing, each one providing a slightly different take on the presentation’s core ideas.

While amusing, DLC Quest does sometimes risk becoming the very thing it satirizes — especially the Freemium campaign. Constantly sending players back to the merchant is funny at first, but can grow a bit tiresome, and simply pointing out how annoying it is to backtrack doesn’t take away from the fact players are still being made to backtrack. Likewise, the relative lack of gameplay makes a good point about the structure of free-to-play and DLC-heavy games, but nonetheless can fail to stimulate, even in an experience that won’t last two hours. 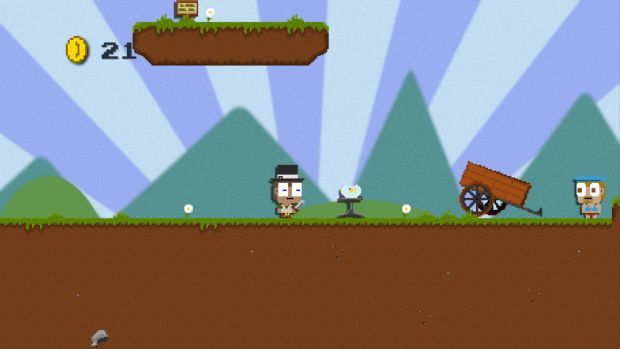 Still, for less than five dollars, there’s enough charm to justify the entry fee. The game’s dialog induces anything from smirks to cringes, while the retro-themed graphics and music are joyful in their simplicity. It’s a cheap game, with a rudimentary premise, that does enough to keep its joke fresh and feels inherently validating for a player who’s grown weary of the game industry’s less savory practices.

At the very least, you’ll get your money’s worth, which often cannot be said for the many games DLC Quest owes its creation to.