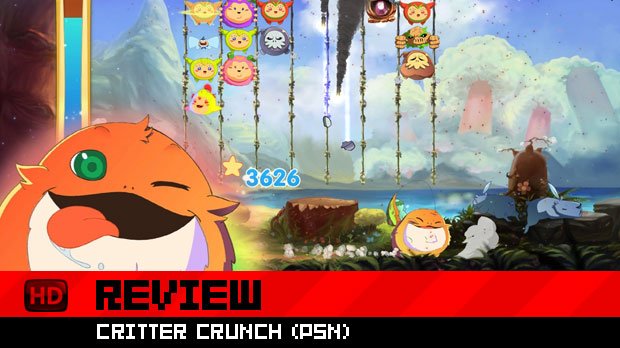 Toronto-based developed Capybara games has been around for awhile, likely doing a bunch of stuff you might have overlooked. If you haven’t heard of them, I wouldn’t blame you. Maybe you’ve had a chance to check out the Ubisoft-published Might & Magic: Clash of Heroes, or its original puzzle game Critter Crunch for the iPhone.

The latter title — available for a measly 99 cents on the App Store — was released over a year ago, and despite winning numerous awards, was mostly overlooked. This week, the developer will unleashed a more polished version of the game for PlayStation 3 as a downloadable title for the PlayStation Network.

Inspired by puzzle titles like Magical Drop and PopCap’s AstroPop (and brought to you by the adjectives “cute,” “cuddly,” and somehow, also “gross”), Critter Crunch has player’s controlling Biggs, a friendly species of animal that resides on the island of Krunchatoa. Like all animals, his goal is to survive and provide for his young, the smaller and appropriately named furball, Smalls.

Fortunately, Krunchatoa’s ecosystem is thriving, and Biggs can take advantage of this by using his long, sticky tongue to help the island’s animals feed off of one another. But Biggs himself doesn’t feed off of the island’s inhabitants, instead ingesting the jewels which they drop once exploded from over-eating. As for his offspring, Biggs then feeds the young Smalls by throwing up a rainbow of nutrients (literally) into his mouth. 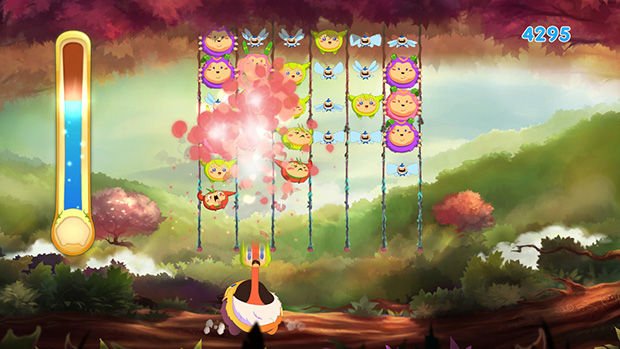 The game is set up Space Invaders style, with creatures hanging on a varied number of vines, in most cases dropping down towards Biggs as time passes. By using the d-pad, players can make Biggs quickly waddle back and forth across the screen. By pressing the X button, Biggs shoots out his tongue which allows him to pull down animals from the vines. The goal is to feed these creatures to other, larger creatures — over-feeding any animal will cause it pop off of the board. An example at the bottom of the food chain is the fly, which can be fed to the island’s medium-sized creatures. Feeding these medium sized creature one fly will cause them to become full; feed them a second one will cause them to explode, and will be cleared away from the screen.

Capybara plays with this simple formula by allowing players to add combos — group more than one creature together on the board of a like color and size, and exploding one will cause a chain reaction that will clear that entire group. Feeding a “full” creature (one that you’ve already fed) to a larger creature will cause it to instantly pop, in lieu of feeding them two smaller creatures. You can also be on the lookout for “Food Chain” opportunities, with come about when a larger creature is sitting above a smaller one — feeding the tiny critter will automatically cause the bigger fellow to gobble that little guy up.

As critters pop, they’ll drop coins, jewels and relics (and later, power-ups). This is what Biggs wants; this is his food. Sliding across the board and eating them up (hurry, or they’ll disappear!) will cause Bigg’s hunger bar to fill. Filling it to the max will end the round, and is the goal of most of the game’s modes. 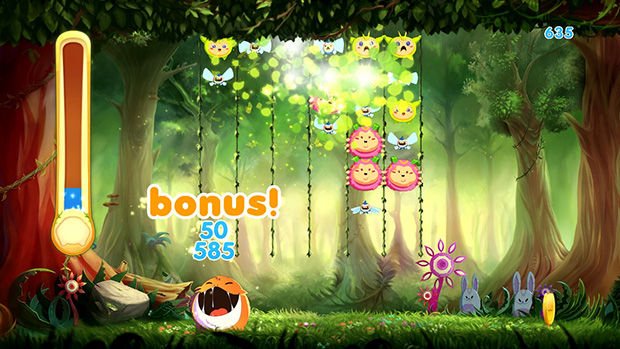 Using variations of the ecosystem rules, it’s possible to create incredible chains with a mixture of matches, combos, and “Food Chains.” While it’s easy to pick up and play, fully understanding what you have to do (and the various ways to do it) can be overwhelming at first. But after a few games, it will click for most players — particularly fans of similar puzzle games — and you’ll be instinctively making Biggs snap up creatures in no time.

If you’re good enough, you can pop eight or more critters at once, prompting the baby Smalls to appear on the side of the screen… and that’s where the rainbow vomit comes in. Smalls is impatient, and won’t be there long, so you’ll have to quickly rush to the side of the screen where you’ll press the circle button to — you guessed it — vomit a rainbow of fun into his little mouth.

While you could completely ignore him and continue selfishly snapping up jewels to fill Biggs hunger bar, you’ll miss out on a significant amount of bonus points. And someone might call Krunchatoa Social Services on you, because you’re a bad, bad parent.

The game also introduces a number of “Power Foods,” special items that Biggs can use for various purposes. Watermelon, for example, will let Biggs spit seeds that can pop any type of creature on the board. Garlic let’s Biggs burp a massive wave of bad breath in the direction of critters on the vine, pushing them back and allowing for more time to mix, match, and feed. Later levels also introduce different critter types, including bomb critters that explode instead of simply popping, clearing a larger area. Or poisoned critters that not only infect those around them, but drop globs of infected waste that, if eaten, cause Bigg’s hunger meter to drop. 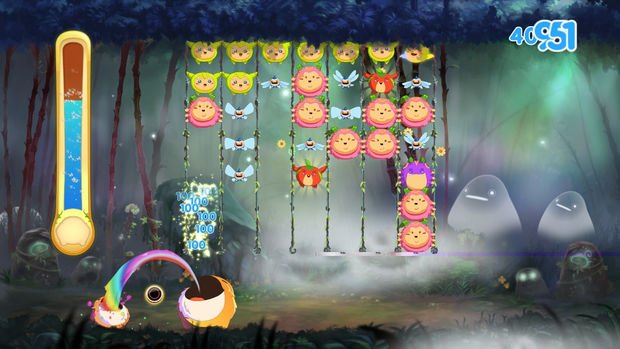 The game is broken up into a few modes, the main one being “Adventure” mode which follows explorer Hank Hudson (Capybara’s mustachioed mascot) as he attempts to view Biggs and the creatures of Kruncatoa in their natural habitat. The island is broken up into different areas, each with its own series of levels of goals; some require you to fill up your hunger bar, other “Challenge” and “Puzzle” modes require some different thinking. As you progress across the island, the challenges and levels get increasingly difficult, with Hudson interjecting some genuinely funny “island discoveries” via cut-scenes in between areas.

While the “Challenge” and “Puzzle” modes are integrated into the “Adventure” experience, they’re not necessary to proceed; in most cases they open up bonus areas off the linear path. These modes are also playable outside of “Adventure” mode.

“Challenge Mode” presents a particular set of parameters — don’t let certain “hatching” critters get eat by bigger creatures, while filling your hunger bar, for instance. These are typically, as you’d expect, extremely challenging. Go figure. “Puzzle Mode” presents you with a certain “playing field” of critters and a number of moves in which you clear the entire screen using matches, combos, and food chains.

Depending on the type of player you are, you’ll either relish in these modes as an extra challenge, or find them overly frustrating or difficult. Either way, it’s possible to disregard these modes entirely in the “Adventure” mode, but it’s a nice addition for those who are looking for a little more.

Critter Crunch also features multiplayer modes, competitive and cooperative, and each one is a blast. In cooperative mode, players work together to score as many points as possible as waves of critters crawl down the vines at increasing speeds. In competitive mode, each player has his or her own board, and filling the hunger bar and adding bunches of critters to their opponent’s screen. 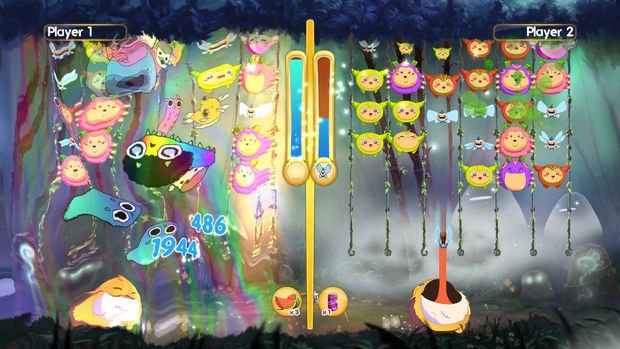 While all of the power-ups from the single-player mode are available, there’s also a handful of “attack” power-ups in competitive multiplayer. Eat a mushroom and your opponents screen will become hazy and “trippy,” making it difficult for them to see the screen. Or you can drop an anvil on the opposing Biggs, making that player’s controls be inversed. Regardless of your skill level, the multiplayer modes (competitive, in particular) are endlessly fun, and will likely result in sweaty palms and shouting, like any good multiplayer game should.

(Note: Critter Crunch can also be played online. I didn’t have an opportunity to test the game online, as I was playing on a PS3 test unit. Provided connections are lag free, all of the above should stand for online play.)

If you can’t already tell by looking at the screenshots (or the below video, called “BARF-STRAVAGANZA”), Critter Crunch is absolutely beautiful. With its hand-drawn 2D look and its soft, water color-like backgrounds, this is easily one of the best looking puzzle titles you’ll ever see. The game’s critters are all wonderfully animated with chewing motions and facial expressions that are not only a joy to watch, but also make it easy to identify their various states for the purpose of the gameplay. That’s not even to mention how adorable the game’s environments and character designs are; if you don’t “awww” or squeal at least once while playing Critter Crunch, seek the comforts of a therapist.

With Critter Crunch, Capabara has designed one of the most original and endearing titles the puzzle genre has seen in years. If you’ve already played or own the iPhone game, know that Capybara has made enough upgrades (in terms of visuals, content, and controls) to make Critter Crunch on PSN the definitive (and simply put, much better) version.

With solid gameplay mechanics and the iconic character designs of Biggs and company, it’s a game that belongs in any puzzle fan’s digital library. Even if you could resist the adorable allure of Biggs, the price might stop you in your tracks. At only $6.99, Critter Crunch may very well be one of the best values in puzzle gaming you’ll find this year.