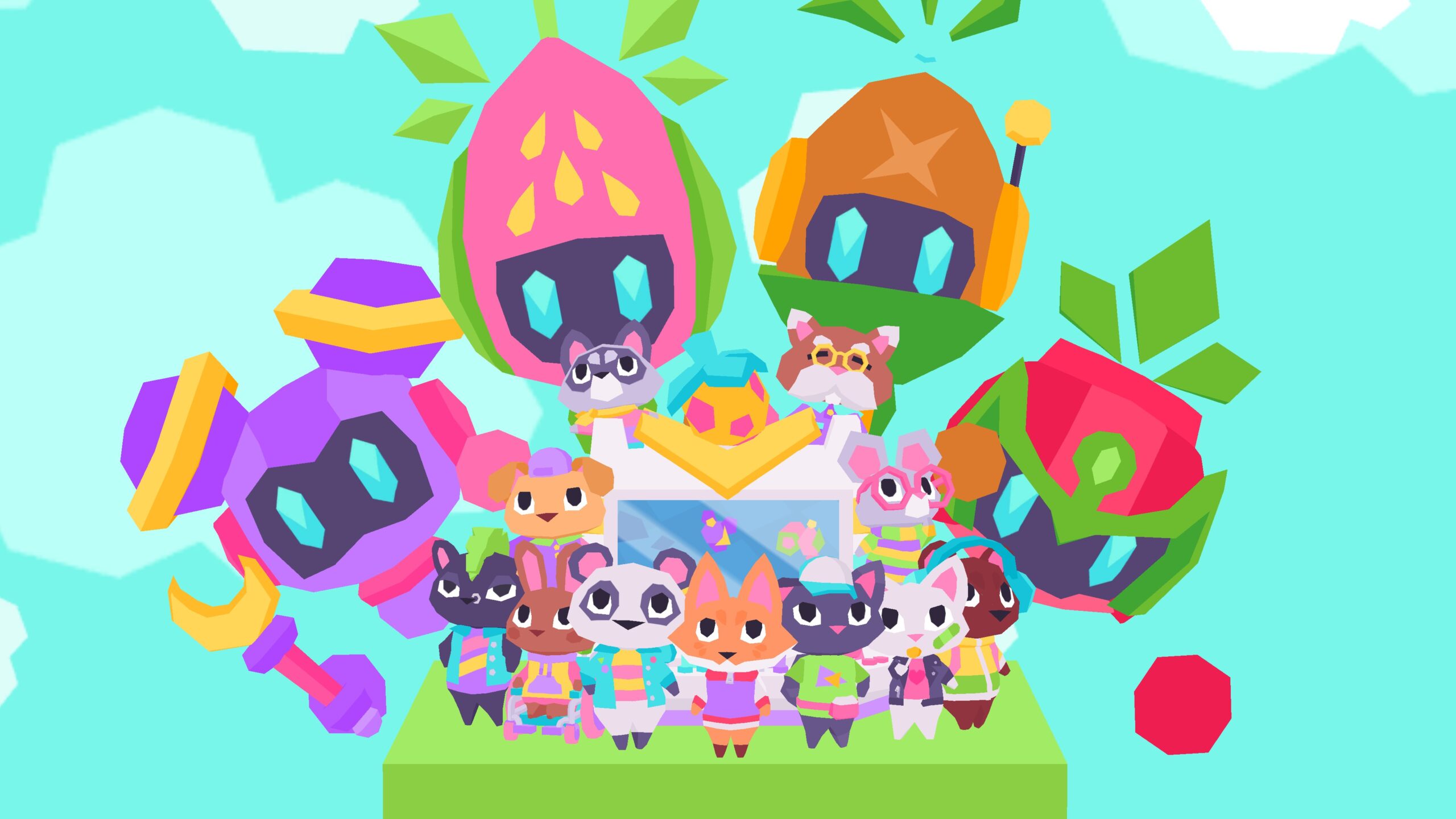 Go get me a sandwich

There seems to be a wave of feel-good games these days, perhaps in reaction to the terrible state of the world. Bright, sunny, uplifting games that eschew punishment for positive emotions. I’m on board, I tend to gravitate towards cute games to start with, and I’m not ashamed to admit it.

But cute games can also be hard to review. Take Button City for example. I have to stare right into its adorable starry eyes and say, “you let me down, game.” 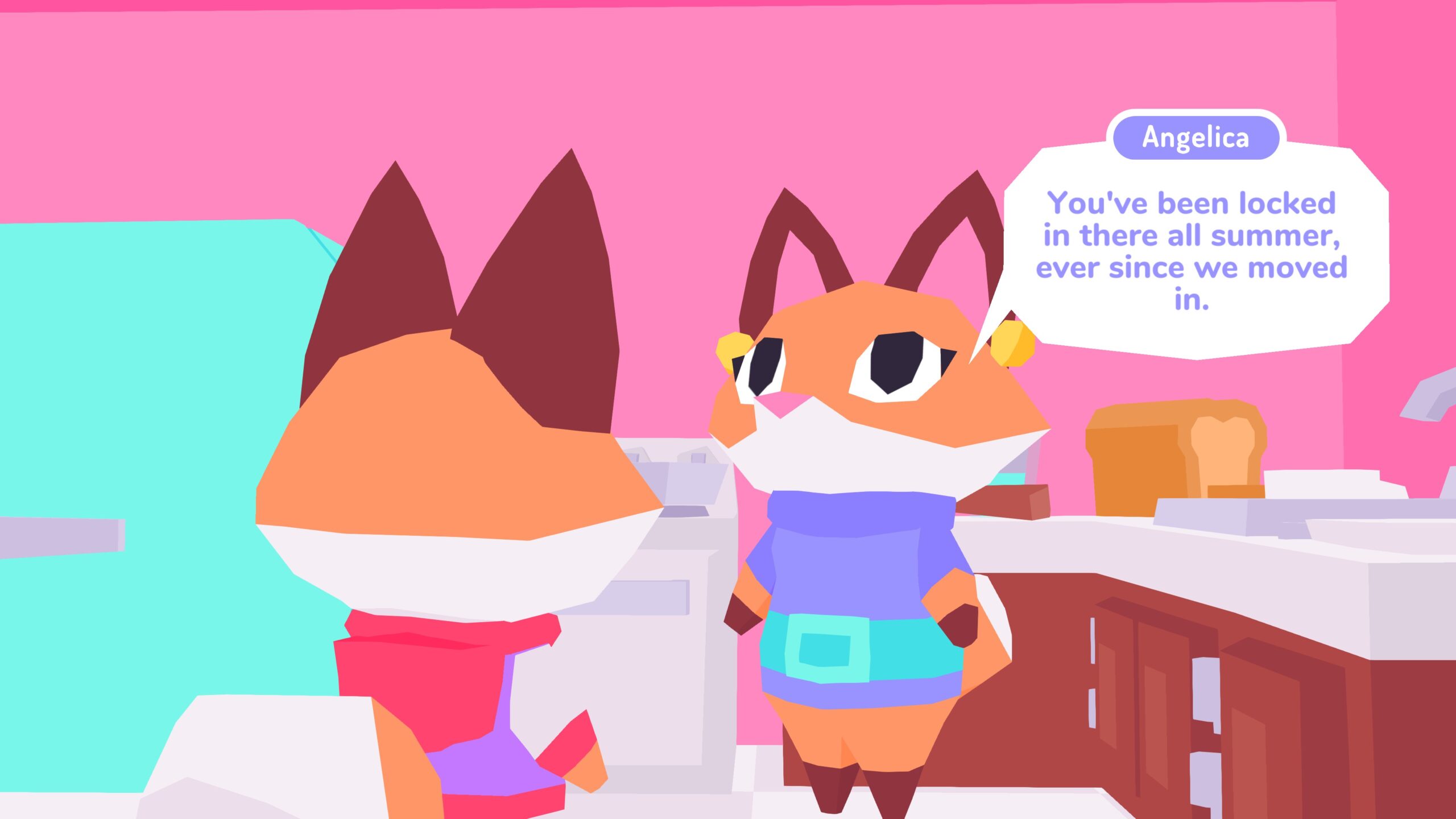 You play as the new kid in town, Fennel the fox. After spending most of the summer not making friends, your mom is fed up and sends you out into the world. It’s not long before you find the local arcade, the titular Button City. You’re immediately recruited into one of the local Gobapod crews.

Gobapod is big business in Button City; teams compete against each other to try and win the coveted Golden Gobapot. How the rankings work is a mystery to me. Your main rival is the Tuff Fluffs, and you have to beat them three times for some reason and then you win.

Meanwhile, it looks like Mr. Button is on the cusp of selling Button City to the cartoonishly evil businessman, Peppermint Pepperbottom. This threatens to end Fennel’s new friendships before they can even blossom because he has no other redeeming qualities!

Pardon the sarcasm, but I’m down on the story. It’s The Goonies. It’s The Borrowers. The old “saving the orphanage” plot. There’s nothing wrong with leaning on a tried and true narrative device, but you have to provide your own twist to it. That doesn’t really happen here, at least, not to a satisfying degree. I could probably find an analog to essentially every facet of the plot. It started to descend into eye-roll territory, as I kept calling out the cards it carelessly pulled from its sleeve.

There are certain divots of depth to the storyline and characters, but that’s all they are. You get glimpses of the difficulties that all the other characters are facing, but it’s hard to feel those motivations pushing them. The characters, as a whole, are rather flat. The only one that felt wholly unique was your mom, but that’s because she acts like a mom. Most of the characters that stood out to me aren’t really your friends; Licorice the skunk… That might be it.

The main plot thread of the arcade being sold nearly gets interesting, but it climaxes with the most straightforward solution I can conceive. There’s no revelation about the pains of growing up, there’s no discovery in the value of friendship — no. It’s something more obvious, and it’s not even done for reasons that tie into Button City’s greater theme. 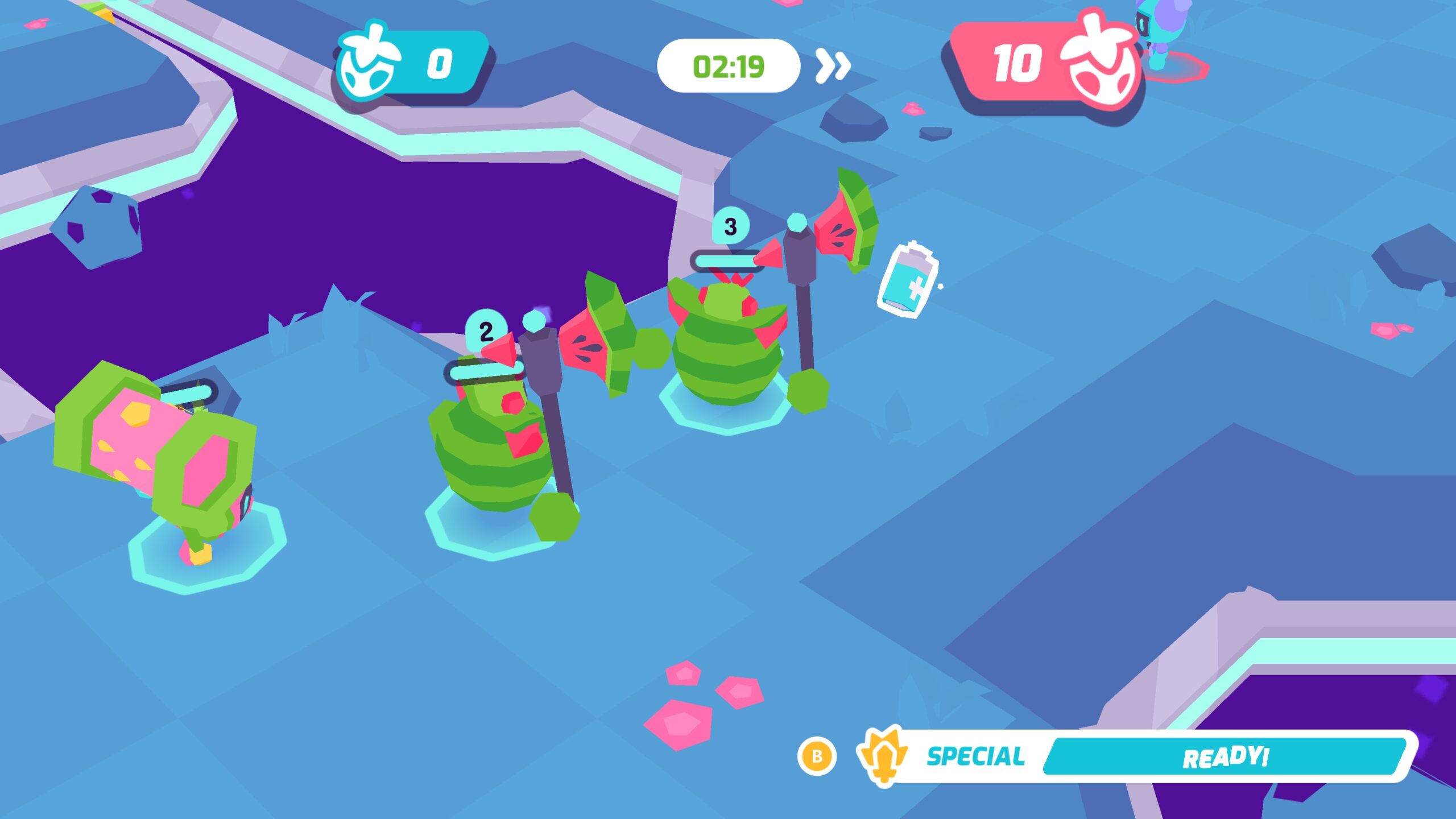 So that’s the nadir, but it doesn’t get too much better from there. Listen, I love arcades. I seek out the ones that are still active where I can. I love digital representations of arcades, even fictional ones. Button City seemed so far up my alley, I can’t believe it could go wrong.

It’s not a matter of expectations, either. I know how difficult it is to create games within a game. Whenever it’s attempted, whatever in-universe game that is pulled is a shadow of proper release — that’s just expected. These, however, don’t even provide an experience that is fun.

rEVolution Racer was probably the one I was looking most forward to trying. It’s a colorful racing game with a heavy emphasis on drifting. The problem is that there’s no impact to it. There’s no trick to drifting, you just turn really hard. That gives you boost, and you might as well hold the boost button down continuously because hitting the guard rail doesn’t slow your car. You can make a token effort at drifting around corners and still win.

Gobabots is a MOBA, which is already a genre I don’t love, but it’s also the most boring MOBA I’ve ever played, and I had to play it about a zillion times. You collect berries, take them to the middle and put them in a blender, and try not to get killed by the other team. Not very exciting. It’s kind of cool that you need to collect the little bots to play in the game, but whenever your character plays Gobabots for story reasons, you’re stuck with Pinarang. I wanted to play as the watermelon! That’s not fair! Don’t strip away the shred of joy I found in the game!

Finally, there’s Prisma Beats, which is fine. It’s Dance Dance Revolution on your keyboard or gamepad, and it does that. Not the most outstanding I’ve played, but it works, so props where they’re due. 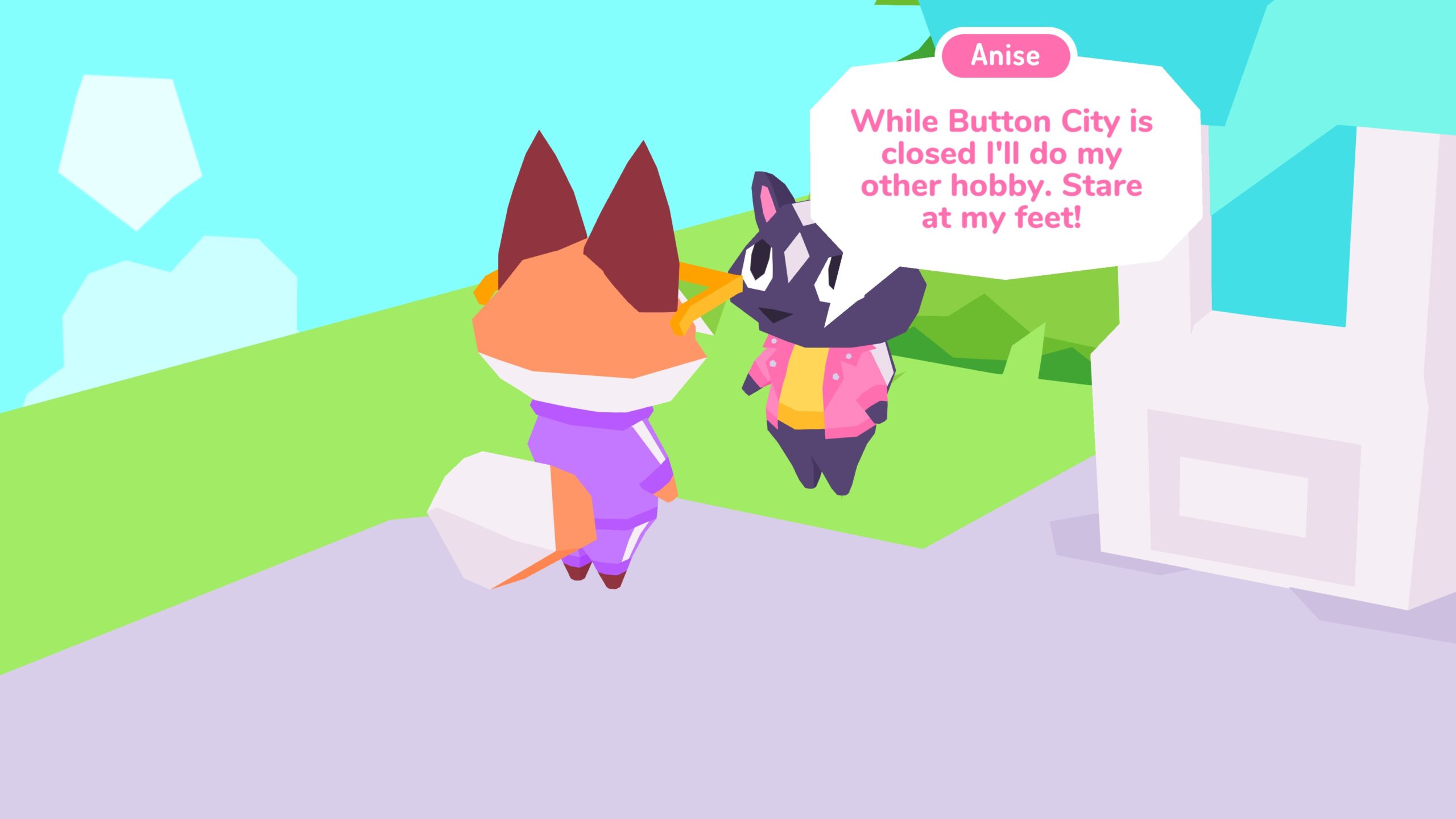 There are other mini-games. The one that most caught my eye was the visual novel, and again, it’s fine. It was unexpected and executed well enough that it was kind of delightful.

The lack of compelling side games would be easily forgivable if the main gameplay carried its weight, but I can shatter that hope with one question, “Do you like fetch quests?”

I honestly don’t mind them. Most NPCs have their feet glued to the ground, so yeah, I’ll go get them a watermelon if they’ll help me on my quest. Button City is packed with fetch quests. They are seeping out of every crease and crevice. The first thing you do is go get your mother a sandwich. Not long after, you have to get enough tickets to buy a Gobabot for yourself, and that requires you to find and talk to every member of your squad.

It never gets better. The worst I found was a side-quest where you find one door that wants to talk to another door, so you carry messages down the stairs and around the building, back and forth, over and over, until they say, “Alright! Here’s your prize.” Despite the fact that you’re usually just a couple button presses away from swapping locales, moments like that make you wish for the option to run.

The rewards for sidequests? Mostly costumes. I’d say they aren’t very good costumes, but I think at that point I’d be nitpicking. 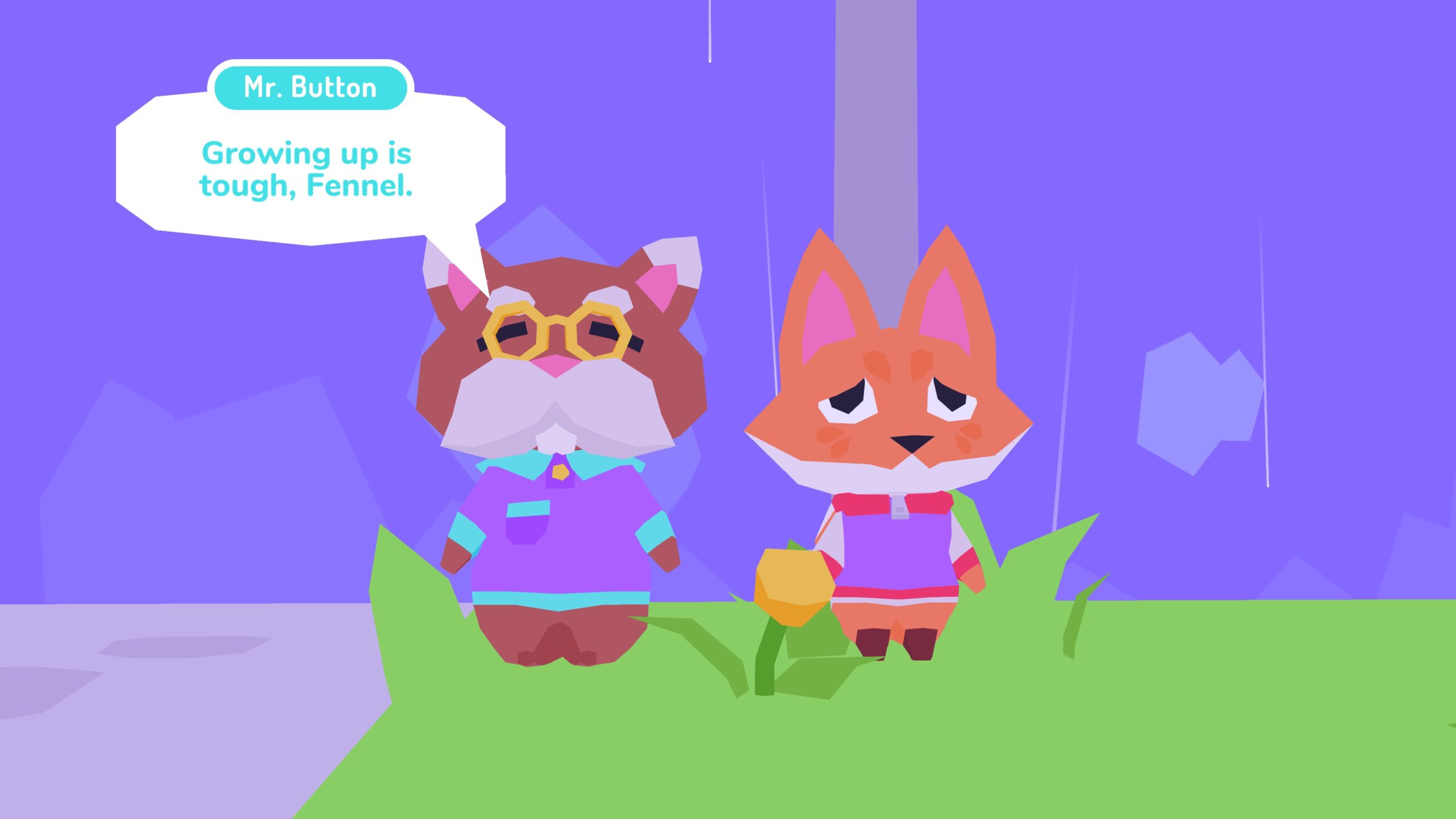 Which is too bad, because I love the aesthetic. The music is cute and chirpy, sometimes reminding me of Mega Man Legends of all games. The graphics are simple but effective, a solid-textured Animal Crossing of sorts. The game world, being little diaramas is an effective way of presenting it without having to render an entire roamable town. I even like how speech bubbles wobble to life.

However, I found very little else to like about Button City. I think it’s narratively weak; a few sparks, but never a fire. The games held within are not just overly basic, but often not even fun. Even the quest design is an escort quest and a forced stealth section away from a broken controller. It makes me feel like the bad guy when I say these things to such a cute and innocent game. I absolutely wanted to love Button City, but it gave me no reason to give up another quarter.