Battlefield: Bad Company 2 Vietnam is one of those rare products where if it simply works as promised — or gets even marginally close — it’s a crowd pleaser.

DICE ran into some temporary technical issues with online multiplayer in Battlefield 1943 and Bad Company 2 right around each game’s launch, causing me to be more than a little nervous for the just-released multiplayer-only Vietnam expansion, but that’s thankfully not the case here (for the most part).

And, guess what? The crowds seem to be mighty pleased with this one.

It’s surprising to me that Vietnam was released as an expansion rather than a standalone product. Because really, all of the parts are there: new maps, weapons, vehicles, voice-overs, and even a 49-song soundtrack are what you’ll find.

But no, this content gets its own little menu directly inside of Bad Company 2, complete with “Fortunate Son” by CCR. Perhaps the decision has to do with all of your multiplayer statistics and progression, which are shared between the core game and this expansion. If you had all of the class gear unlocked in BC2, you’ll have the ’60s-era counterparts in Vietnam, too, minus whatever items wouldn’t make sense for the period.

I’m glad DICE went this way, and I’m also glad that all four modes — Rush, Conquest, Squad Rush, and Squad Deathmatch — are playable on all four (soon to be five) multiplayer maps. Each platform will get the final map once its players build up a collective 69 million team actions (spotting, reviving, etc.).

I’ve heard reports that some people are having their unlocks and rank reset, which isn’t entirely surprising considering prior Battlefield launches. I haven’t personally run into anything that dramatic, but some of my statistics for medals and things of that nature don’t appear to be updating accurately. 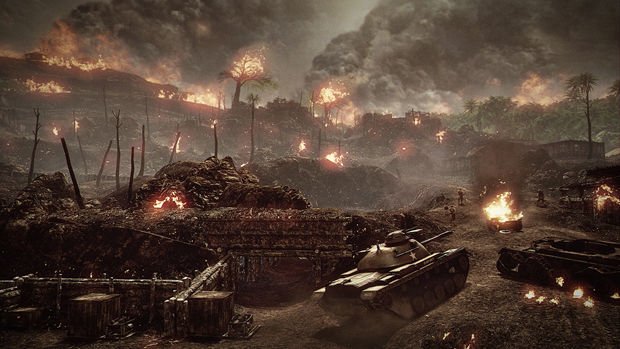 The modes themselves are virtually identical to what BC2 fans are used to, which is definitely not a negative. You stand by a flag to capture it, or you arm radio communication rigs with explosives; y’all know the drill by now. These rule sets define what Battlefield is, so why change ’em?

The maps, on the other hand, are a departure from the norm. At the moment, Hill 137 is my favorite. It’s got grimy tunnels and trenches, but best of all, one side of the map is a blackened, flame-covered forest — or, what used to be a forest. It’s an iconic look, much like the gorgeous terraces of Vantage Point.

All of the maps are breathtaking, and for me, easily the best part of Vietnam. I’m struggling to remember which one it was, but one of the maps had this massive, intricate waterfall system off in the distance. Hopefully everyone will take a quick break from the action to check out the views from time to time. They’re worth an occasional in-game death, no question.

The one negative I do want to point out is that some of the steep terrain is deceptive. You’ll see a pile of rocks or ledge that you should, in theory, be able to scale, but instead you’re left temporarily stuck on or around it. That’s just one example, and based on my playtime, I’m far from the only person to fall for this trickery. However, none of this is to say the level design itself is bad; it’s quite good, actually. 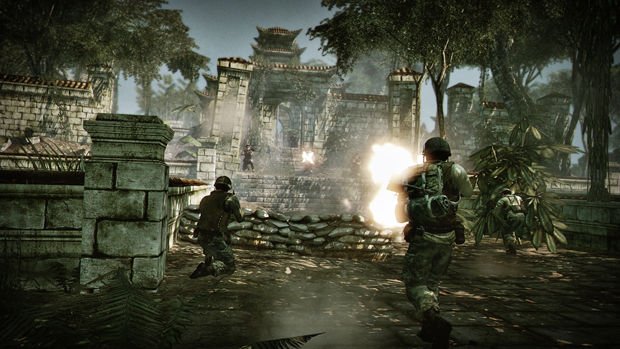 The other noteworthy addition for me was the flamethrower, which is unbelievably satisfying to wield. Much like the rest of DICE’s great audio work, the hiss it lets out is top notch. Plus, you can totally destroy parts of the environment with it, and that’s always a plus.

And finally, there’s the presentation. Before and after each battle, an overview is given in the style of a news report as if the virtual conflict you are fighting is, in fact, really happening right this moment. It’s a nice touch, and it really makes the difference; DICE didn’t just release some new maps and weapon skins and call it a day here.

As far as the in-game experience is concerned, vehicles and loudspeakers will play the sort of rockin’ tunes you’d expect. From inside of the former, you can manually switch between songs. So, naturally, Vietnam players can expect to hear a lot of “Ride of the Valkyries” and the aforementioned “Fortunate Son” as they rush in, guns blazing. Nothing wrong with that. 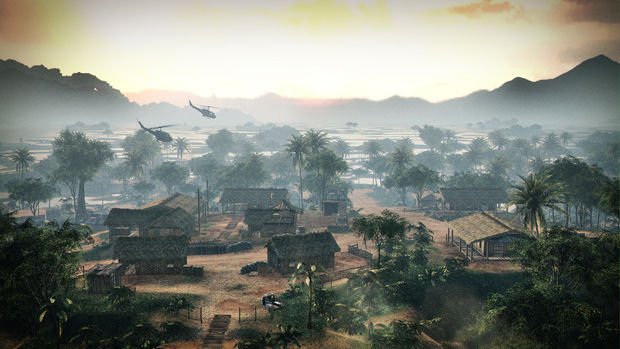 Basically, if you are an active Battlefield player, or are looking for an excuse to rejoin the ranks, getting Vietnam is a no-brainer. The expansion feels fresh, both in terms of the locales and how the older weaponry has pushed combat to be more in-your-face.

The same level of care and attention to detail you would find in one of DICE’s retail offerings has been put into all aspects of Vietnam. It’s not uncommon to see studios put their “B” team on downloadable content, but it sure doesn’t feel as if that was the case here.

I suppose it would’ve been nice to see some more experimentation in terms of modes or mechanics, although the quality of what’s included is high enough that you can hardly complain too much. I suspect DICE will support Vietnam through balancing, updates, and possibly even more maps.

No matter what does or doesn’t happen, though, there’s no reason not to dive into this expansion immediately.