Analogue: A Hate Story is a sci-fi visual novel taking place thousands of years in the future. It has a strong pedigree, coming from the mind of Christine Love, a well-regarded figure in the English-language visual novel/interactive fiction scene, who also created Digital: A Love Story and don’t take it personally, babe, it just ain’t your story.

Full disclosure: I’ve never really played (read?) a visual novel. So take everything you’re about to read with eight grains of salt. It’s entirely possible that I don’t “get it”. Keeping that in mind, was my experience with Analogue a tale of love or of hate? Hit the jump to find out. 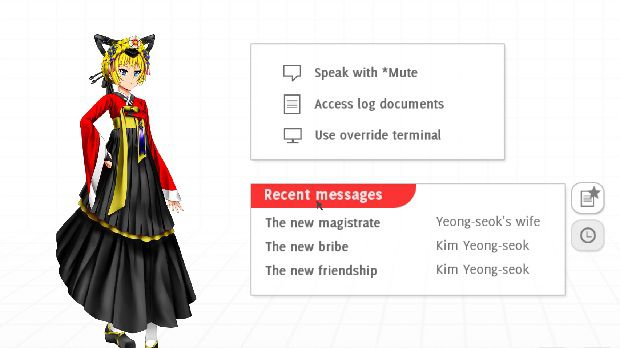 As a game, Analogue is nothing if not minimal. The interactive components primarily consist of a few given commands and binary dialogue trees. Beyond that, narrative is constructed through diaries and epistles of the long-dead former inhabitants of the generation ship, Mugunghwa. The player enters over 600 years after the last of the crew died, and is tasked with reconstructing the events surrounding their last days on the ship.

As you pore through text, you can occasionally call for assistance from one of the ship’s two AIs. They each have very different perspectives, and to get all of the content you will need to carefully balance the two occasionally playing them off of one another. Additionally, at some point you will need to interact with the ship’s override terminal. This allows you to reallocate power, control the AI programs and ultimately download and/or transmit the data stored on the derelict vessel.

Immediately a great sense of purpose is established and the gentle, non-intrusive soundtrack harnesses and cultivates that initial sense of intrigue to create a solid backdrop for a decent albeit heavy-handed mystery novel. 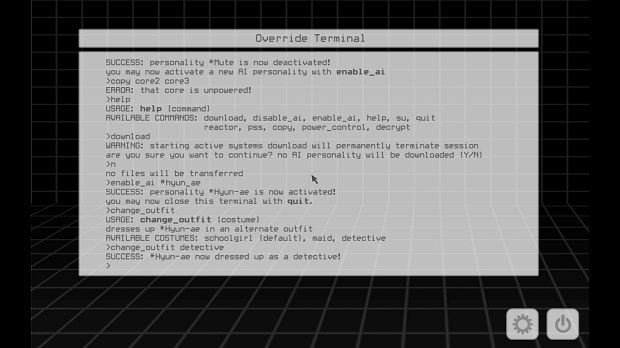 I came into this with virtually no expectations other than a science-fiction story about transhumanism, traditional marriage, and loneliness. And while each of them is present, all of the moral complexity and subtlety of these issues are never explored, effectively reducing each issue to one or two words. The pieces of exposition are expertly woven together, but the complexity of the ship’s political factions and the interactions between the characters are lost with a shotgun blast of names. There are a few guides within the game to help, but I still ended up taking quite a few notes.

An initially intelligent, “enlightened,” and well-read crew was mysteriously wiped out and supplanted with a damn-near illiterate populace that desperately holds to rigid class and gender roles. The new social paradigm is heavily influenced by the structure of feudal Korea. Patently offensive to most modern audiences, these circumstances are used to elicit sympathy from the audience for a woman initially known only as the “Pale Bride.” It’s difficult to say much without giving away some pretty massive spoilers, but I felt like much of this set-up was established merely to pluck at my heart strings. While successfully and superficially well-executed, it is clumsy and I think a great opportunity to address issues of gender equality was lost here.

Other themes “explored” by the work are side-stepped in much the same manner. Cosplay is, for example, mentioned, but not really discussed. The result is a well-written system of alluding to conditions and social phenomena, with no analysis or reflection. Comedy, by contrast, is plentiful, and serves to help redeem the work. 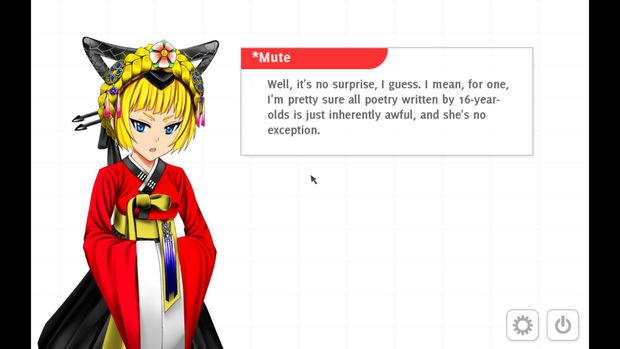 There are a couple of romantic options for the player to take, though neither feels particularly believable. The player is effectively silent, and the two potential love interests are more caricatures than anything that would resemble a relatable human being. When sexuality is brought up through the examination of crew logs, it is tragic; however, when the AI reflects upon the diaries, it comes off as cheap fan service. Neither relationship is tangible, nor does their inclusion do anything but detract from the work as a whole.

My first run of Analogue took me about five hours. There are a total of five endings though, and the other four took me another six hours to navigate. There is some trial and error to unlocking certain sequences, but they all fit together well.

Analogue is a really mixed bag. When I hear the word “transhumanism” I immediately think of a jungle of moral quandaries and reflections upon the interplay between class, technology, human nature, and our future as a species. I came in expecting Deus Ex and instead I got a politically milder, sexually-charged Phoenix Wright. It isn’t great but it isn’t awful either.

To its credit, Analogue’s non-linear story does take some thought, and the journey is worth it, if only to resolve the dramatic tension sparked by the introduction. The legitimate questions that are raised are answered quickly by the author, apparently discouraging audience reflection. What is here is solid, but superficial.

My feelings about Analogue are nuanced. For every thing Love nails, there’s another place where the experience falls short. The middle stretch doesn’t live up to the standard set by the intro, but the finale is just satisfying enough to even it all out. If I had to sum up the whole game in one word, it would be “ehhhhhhhh”. Don’t take it personally, but this just ain’t my story.