Time travel in fiction comes in two varieties. One is the sort of unexplained, mysterious force that you accept and don’t question for the sake of entertainment, like in The Time Traveler’s Wife or Back to the Future. The other is found in films like Primer and Timecrimes and is intricate and confusing, but if you pay attention you’ll at least understand 25% of it — you’ll get the other 75% when you read the fan forums, unless you are smarter than me and are the one posting the explanations.

So far, we’ve only had the former type realized in games. Titles like Braid, Blinx, and TimeShift treat the premise of time travel like it’s a VCR.  You rewind, pause, and fast-forward time without ever having to deal with the consequences of alternate timelines or paradoxes.

Achron is a different kind of game that turns the time travel gimmick into a fully-realized concept that opens the doors to new strategic and narrative possibilities in the real-time strategy genre, though at a substantial cost to functionality and presentation.

At first, I felt that Achron was just too complex of a game for my feeble Earth mind to handle. I thought, “Surely, this is a game made by future space people who are as comfortable with the idea of multiple timelines, conflicting realities, and paradoxes as I am with hot baths and pepperoni Hot Pockets (i.e. VERY comfortable).” The more I played Acrhon — or struggled to play, really — the more I realized I wasn’t at fault for my confused state. This game is just bad. Like the sort of bad that makes you want to kick things, push the elderly into oncoming traffic, and shout profanity at the top of your lungs at 2 A.M.

For example: “YES, THAT IS A WALL YOU DUMB, TRASH-HUMPING A.I. UNITS!!! YOU MUST WALK AROUND IT!! THAT IS WHAT I AM ASKING OF YOU! YOU WRETCHED, 1998-LOOKING ABORTIONS OF FAILURE!!!”

But mainly: “WHAT IN THE HELL JUST HAPPENED?”

I have never exerted so much effort in just trying to understand a videogame. After watching hours of matches and tutorials on YouTube, reading through the game’s wiki guide, and replaying missions up to five times each, I finally grasped Achron‘s time travel mechanic. Despite the confusing tutorial, HUD, and overall design, I was able to get my bearings and play the game. Not that the experience became that much more enjoyable. 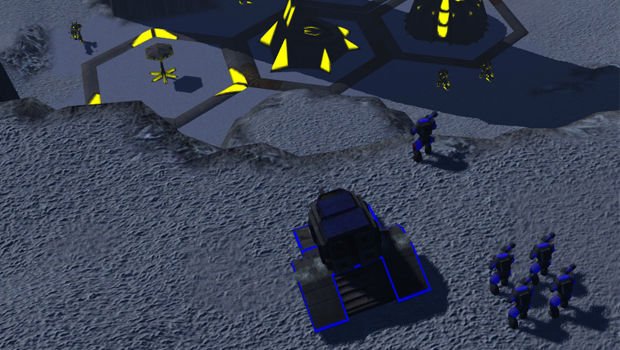 At its core, Achron is a small-budget, amateur recreation of StarCraft. You command one of three races, mine resources, and send units into epic space battles. However, what sets it apart and caused it to have a development cycle lasting over a decade is the ability to manipulate time at any point of the game.

At the bottom of your screen, you have the Time Window, which gives access to the past, present, and future. Like a video editing program, you can scroll through it to obtain time codes and immediate access to select moments in time. However, the Time Window is limited so that older times will eventually become inaccessible. As a result, you will still need to think and act fast in order to win a match.

Although navigating time doesn’t cost anything, changing your actions in the past does. Above the Time Window, there is the Chronoenergy bar. This auto-refilling resource dictates what you can change at times prior to the present. More orders for more units taxes the resource, as will making orders from further back in the past; the closer you are to the present, the less energy is required.

As you might imagine, having access to such a powerful tool makes new realities possible and the game’s high difficulty level somewhat manageable. You can botch a fight then rewind time to prevent it from happening. You can send out a scout, see your enemy’s base, and then stop his sacrifice from occurring. These are just basics, however, because the possibilities are plentiful and complex. Most you won’t see outside of multiplayer matches, though. 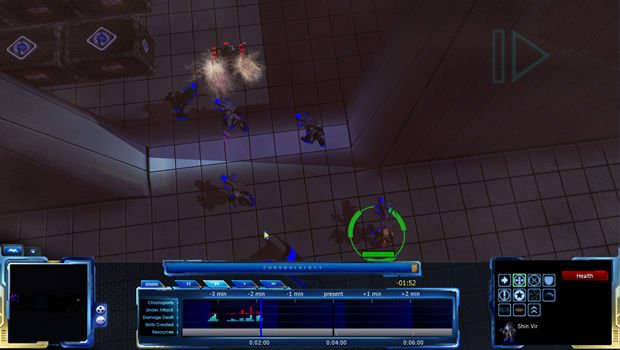 Even the simplest changes to command sequences can cause a migraine in Achron due to the hierarchy system. Since it costs a considerable amount of Chronoenergy to change more than one unit’s actions, it’s best to have units follow a unit leader. Let me give you a scenario so you can understand how it works:

You link ten marines to your campaign protagonist, Halloway, forming a hierarchy. Wherever you tell him to go, the ten marines will promptly follow behind, with visible lines showing their connection. Now, when you go back in time, you only need to change the leader’s actions instead of all the units. As a result, you spend a tenth of Chronoenergy.

The biggest problem with the time travel is that you must undo actions in order to negate an order. You can’t go back in time and overwrite an order, so if you told a unit to go right then rewind time and tell it to go left, he will still follow his first order by going right. You must remember to undo units’ actions before giving them a new one in the past. It’s a key step that is easy to forget, but one that’s nearly impossible to fix when overlooked.

This would be fine if there was an easy way to keep track of what units were given what orders at what times, but the game neglects to give the player this vital information. I often found myself forgetting to undo an action or not being able to find when I made an action. I frequently became lost and unable to understand why one group of units was doing something against my orders, unable to keep up with whatever order I gave them five minutes ago.

It’s a weird system that makes me think the developer chose to instate more rules to balance out the rules they previously decided on, rather than implement a better system. There are other similar decisions that convolute the game such as timewaves, which I’ll spare you from reading about. I’m sure your head is already a throbbing, heavy mess by now. 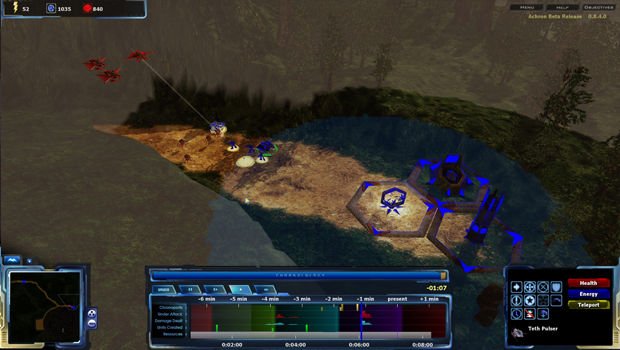 Even when you get used to the game’s design quirks, it’s still not fun to play for the simple fact that the game is broken. Achron devotes so much of the computer’s CPU to the time travel mechanic that there aren’t enough computing resources to give ally units functional pathfinding and A.I. I probably wouldn’t have rewound time so much had my troops not gotten stuck in the geometry or became lifeless in front of enemy fire at every opportunity.

The same applies to why the graphics look so dated, yet even the art direction is lackluster. It’s hard to tell troops apart, and each race’s units are bathed in the their primary color — it looks like an early beta in which the finished skins have yet to be implemented. The cutscenes are also an eyesore — the care put into them seems minimal at best. The character illustrations have chunks of white attached to their outlines, looking like a high schooler’s rushed Photoshop project. There is no excuse for stuff like this in a retail product! At least the music and voice acting are very well done, helping to bring the story to life.

The game’s campaign is long, and I’ll be surprised if many players see it to the end. It requires an amount of patience that I can’t imagine many possess. You will fail so often due to technical issues that the time mechanic will no longer be enough to help you progress. You must memorize maps so you can avoid the parts that will throw your units’ pathfinding off. Also, you must make sure to save often, as the game becomes unforgivably hard without any option to adjust the difficulty. Doesn’t sound very fun does it?

The good news is that the later stages have simpler geometry that won’t give you as much trouble. The catch is that they are massive and take forever to navigate, even though they are often devoid of enemies and goals. You’ll find yourself traveling with no conflict, wondering why the particular segment is in the stage at all. 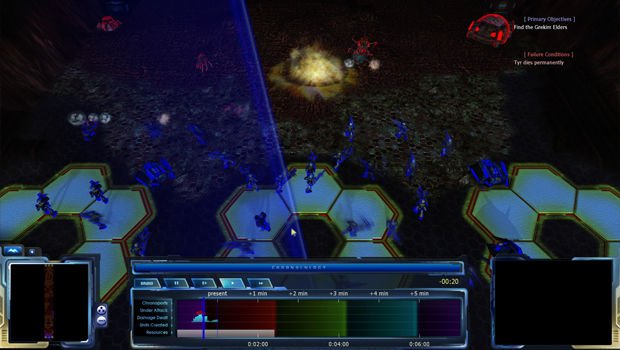 Mutliplayer is where the game’s mechanics shine. The levels are mostly flat and small, avoiding the problems with geometry that occur in singe-player. Instead of spending your time in frustration, you’ll be able to try out some strategies that will make your head hurt in a good way for once. However, many of the game’s design quirks carry over from the single-player campaign. Due to the steep learning curve and lackluster presentation, I predict this game won’t have much of an online community by the end of the year. That being said, it’s not broken like the campaign is, and there are some interesting concepts at play.

Since you pick your race within the match, you can later go back in time and change your race — throwing your opponent for a loop — an interesting trick that isn’t possible in any other RTS. I also loved how paradoxes can occur involving players’ battling between two alternating realities. It’s hard to explain (friggin’ timewaves), but trust me when I say it’s pretty neat. Or go see for yourself!

As novel of a premise as Achron‘s time travel might be, the game is bogged down by numerous technical issues and shoddy design. Why do the autosave files take up over a gigabyte on my hard drive? Why can’t I move the camera around so I can see past the cliff blocking my view? Why does the cursor lag? Why is the audio mixing so strange, with the vocals barely audible by default? Why are so many units introduced so early in the campaigns? Why can’t I skip in-game dialog scenes?

Much like Duke Nukem Forever, Achron proves that a long developement cycle doesn’t mean all those years were spent polishing the end-product. This is a game that feels like it was developed in a bubble, oblivious to elements that have shaped the best RTS games of the past 15 years or to how an outsider will adjust to the game’s rules. Then again, the fact that Hazardous Software couldn’t even get the basics right (A.I., campaign structure, presentation) makes me think the problems go back further than that.