If Double Fine’s recent Kickstarter campaign has proven nothing else, it’s that gamers still want to play old-school, 2D, point-and-click adventure games. As Tim Schafer said in his video intro, the genre seemed to have resided only in our “memories and Germany.”

With last year’s The Book of Unwritten Tales and Gemini Rue being some of the best point-and-click titles in years, there’s still plenty of legs left in the genre. Now Pendulo Studios — the Spanish team behind Runway and the Next Big Thing — is releasing Yesterday, a game in which three characters seek the truth behind a murderous cult. 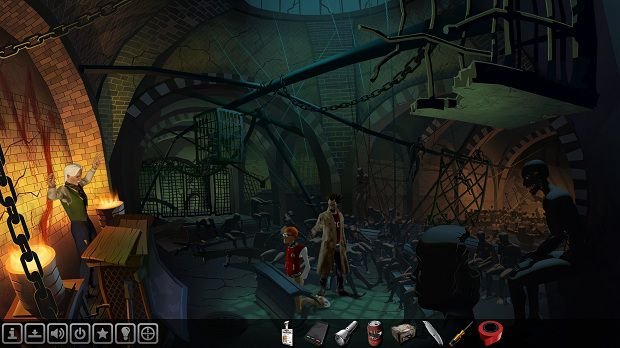 Despite a serial killer brutally murdering homeless people in New York, altruistic rich kid Henry White and his buddy Cooper are still determined to offer aid to the transient community as part of the Don Quixote foundation.

Whilst exploring a disused underground station, Henry gets more than he bargained for after finding the cult leader Choke and his crazy henchman Boris. What makes the cult particularly strange is that — aside from Choke and Boris — the rest of the group is made up of posed mannequins (making it the second creepiest appearance of mannequins in a game after the original Condemned).

Yesterday is a fairly traditional point-and-click adventure, but it starts off in a similar vein as The Book of Unwritten Tales by giving you simple logic puzzles early on. Using an iron bar and cable to dislodge a suitcase stuck in some rubble is pretty much common sense. Need some batteries for a device? Just use your screwdriver to remove the batteries from that toy you picked up.

It’s all commons sense, really, and I was glad to see Henry and Cooper’s inventory full of practical tools like duct tape, screwdrivers, and a torch. At one point when one of the characters is in danger, the best thing to do is just pull out a gun and shoot someone. Again, this is no action game; it’s one-hundred percent point and click. 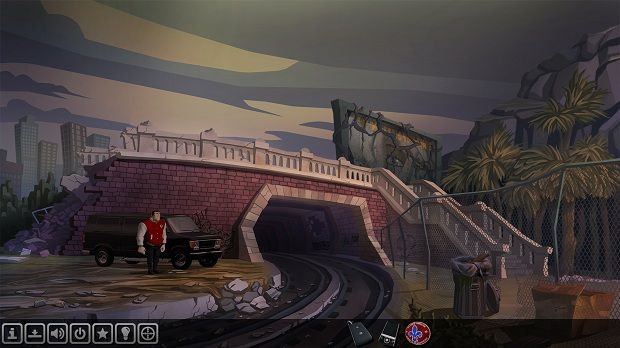 There is a hint system, which will give you clues of increasing specificity with each click and also a highlight button that places a pulsing marker briefly over items you can interact with.

Clicking on objects will bring up a zoomed window showing the object closer up along with extra options such as “view” or “use.” The inventory is always displayed at the bottom of the screen and as you would expect, items can be combined with each other and with objects in the main window. This interaction is fiddly, as the difference between viewing an object and using it is really slight and I found myself repeatedly flicking the mouse upwards just to select a single item.

Whilst I was failing to select an item, Henry is moving around the room because I was clicking on the screen, which was distracting, but I think that this would become more of a familiar move after a while. The other strange thing is that clicking on an object you can interact with will send your character straight to it, making him briefly vanish on screen only to reappear on the other side of the level. It gave me a strange disconnect from controlling the character. At the same time, there was no need to repeatedly click the screen to move Henry and Cooper from one side of a level to another.

There are a few diversions from the usual adventure-game routine, the main one being a test set by Choke after Henry is caught trespassing on his cult’s temple. Henry has to offer the correct movements for a chess game that will result in either a checkmate or stalemate. Neither was too taxing even for my simple mind, but they were a good diversion. Pendulo has said that they’re moving away from their more humorous games into darker territory and this does seem to be the case with the early part of Yesterday. I did find some humor here, mainly coming from Cooper’s flashbacks of his abusive Boy Scout leader. 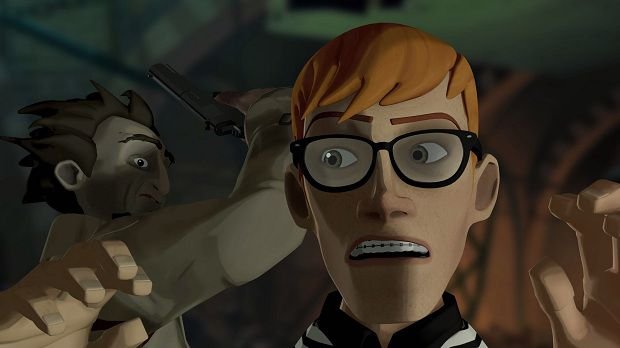 Graphically, Yesterday uses the familiar Pendulo style that you would have seen in Runaway. Characters are exaggerated, especially the brutish Cooper. Choke’s lackey Boris is so cross-eyed, he could be forgiven for being unable to hit someone with the gun he carries. Although the game will feature full voice acting, my preview code didn’t have any. There’s plenty of time for it to be added, so this is understandable.

The short section I played featured a couple of neat twists at the end, which left me wanting to see where the story is going. The first chapter of the game didn’t feature the other playable character, John, but I would imagine the whole game will play similarly. If you’re in the mood for some point-and-click fun, Yesterday will be well worth looking out for when it arrives on Steam later in the year along with a retail release in a handful of European countries.