Oh happy days! The PlayStation Vita has an official launch date, and with that, a release date for its lineup of launch titles. We recently had the chance to play around with some of these including Wipeout 2048, the latest installment in Sony’s hyper-futuristic racer.

With 2048, players get all the same hardcore, precision heavy racing that the series is known for, with added features that make use of the Vita’s hardware. 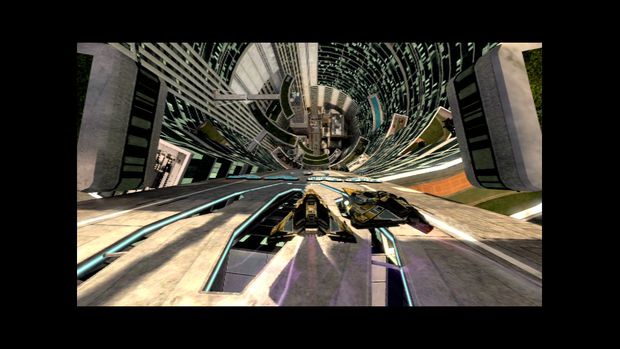 As the name suggests, this Wipeout takes place in the year 2048, the near-future compared to the super futuristic star-dates of most Wipeout games. As far as the series timeline goes, this game takes place at the dawn of anti-gravity racing, before the first Wipeout on the original PlayStation.

This change in setting affects the games look and feel quite a bit. Aesthetically, 2048 retains a good amount of the series’ hyper-futuristic look, but incorporates more city streets, parks, and other contemporary scenes. During gameplay, the new (or is it old?) setting allows for some crazy track scenarios, such as the driving up a skyscraper, then back down on the track Empire Climb. 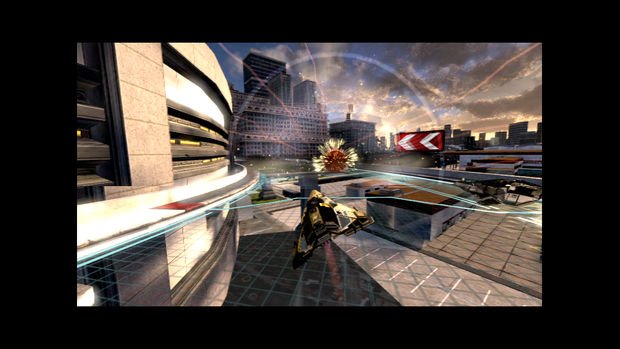 Track design in general has been altered for this release. Being the hardcore racer that it is, Wipeout has always pitted players against the track almost as much as other players. In an effort to make 2048 more accessible, the team at Liverpool has made tracks wider, a subtle but noticeable change as you will spend less time fighting to stay on course. Fans need not worry though, as a relative noob to the series, you should happy to hear that I still fell of the track plenty of times. Just not as much as in, say, Wipeout HD.

Another change to track design are the multiple track paths. Not to be confused with shortcuts, 2048 features branching tracks that incorporate a risk/reward system. So while taking one route may be the the shortest distance to the finish line, it will have more sharp turns and a greater chance for error. Or on a different track, you may run with a route that has more speed boosts while the other route offers more weapon pickups.

When actually racing on these tracks, Wipeout 2048 makes use of the PS Vita gyroscope with tilt and touch controls. Of course, there is still the classic thumbstick and face button controls, but Wipeout aims to make use of Vita’s motion capabilities, in order to ease in more casual gamers accustomed to playing their iPod or iPhone. The controls break down like this: You hold one finger on the back touch pad to accelerate while steering your vehicle by shifting the Vita left and right. Weapons are managed by taping the right half of the screen for offensive weapons (plasma, missiles, cannons, etc.) and tapping the left half to manage your shields. You use the L an R buttons to control your left and right airbrakes respectively. So while 2048 does use touch, the face buttons are active as well. 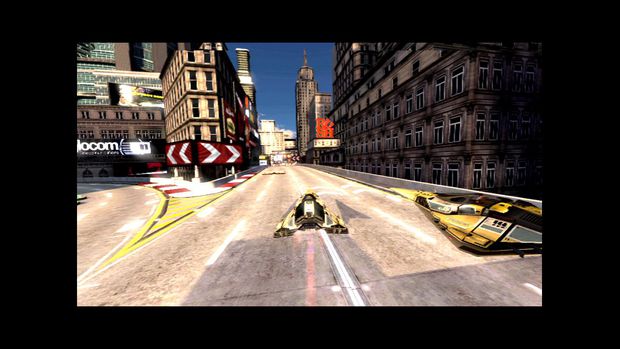 While great for a game like Modnation, the motion controls in 2048 didn’t work all that well in this demo. For a game that requires so much precision, using motion to steer your craft is far too unruly. Overshooting a turn is common and even simple maneuvers, like hitting a speed pad on a straight path, are made harder to pull off. In its current shape, I can’t see motion being the favored control option. Managing weapons with the touch screen worked very well though, and when used with the analog controls, felt like the most natural way to play.

The final feature shown off for the game was the online play. The first thing you’ll notice with the online play is that you are prompted to take a picture with the Vita camera at the start of each race. Whoever places first at the end of the race gets to have their mug plastered on the screen of every other user. It will be interesting it see how “creative” people get with their pics.

Online for 2048 will feature eight player races on any of the games ten tracks. Online play will also feature an online campaign mode, essentially a system of secondary objectives, outside of simply winning, to reward both seasoned high level players and newcomers. For a higher ranked racer these objectives include wrecking a certain number of racers and finishing in first place, whereas lower ranked competitors need only avoid getting wrecked and finish in the top five. The online modes of Wipeout 2048 are rounded out with cross platform play between this game and Wipeout HD Fury on PS3. Basically, 2048 users will be able to compete against Fury users online using tracks and vehicles from Wipeout HD Fury.

If you have played Wipeout before, you know what to expect here. The racing is tight, fast, and punishing to players not up to the challenge. As it is, it looks to be another solid entry into the series, but as a Vita title, it doesn’t do anything mind blowing with the new hardware.