Relic Entertainment’s Company of Heroes 2 has been in development for two years now, and the studio figured out pretty quickly that they didn’t want to change things too drastically. Instead, they focused on adding more on top of what people loved about the first game. Relic is providing more immersion, more authenticity, and more realism.

The big part that’s helping Relic make these additions is the new Essence 3.0 Engine that surpasses the last engine in every way. The new engine is sure to help bring what’s known as the most brutal conflict of human history to life, as you lead the Soviet Red Army against invading Nazi Germany on the Eastern Front. 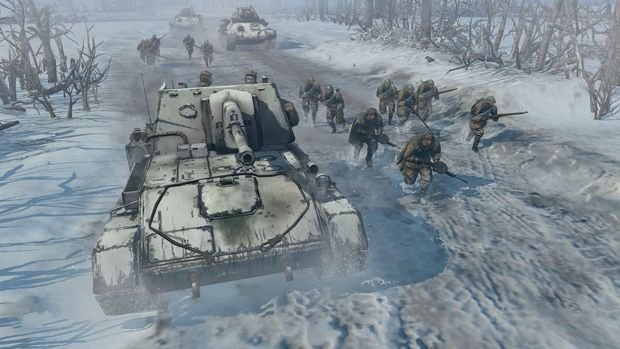 The first thing I noticed about Company of Heroes 2 was just how beautiful it looked for a real-time strategy title. There’s a ton of detail, from the snow filled battlefield, right down to the characters and vehicles themselves. I can’t even begin to imagine how good this will look once Relic has implemented DirectX 11 support.

The Essence 3.0 Engine isn’t only able to output pretty visuals. The snow I mentioned isn’t just a flat surface, it has depth and will slow down soldiers as they try to move through. During the presentation, the Soviet forces were charging down a road towards a Nazi encampment, but the road was booby trapped with explosives. So the Soviets are forced to go around the side, through the snow. It’s safer than the road, but the snow is slowing down the soldiers and exposes them to Nazi gun fire. 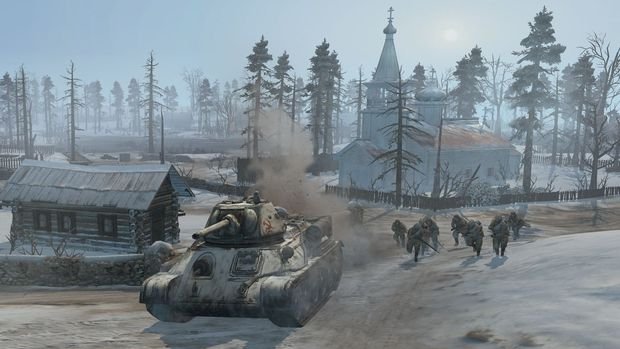 Once on the other side of the Nazi encampment, the Soviets plant a bomb on a wall and create a new path through the back of the base. The Nazis then enter a building for cover, but one of the Soviet soldiers is equipped with a flamethrower. The soldier proceeds to light the building up, burning everyone inside to a crisp. That building could be used by the Soviets for cover too, so it’s up to the player to decide whether they would want to risk spending their soldiers lives for a nice cover spot, or just set the place on fire to spare their own forces.

New to Company of Heroes 2 is the ability to vault over small walls and fences. Now instead of going all the way around an obstruction, soldiers can easily cut right through. This ability is great as Company of Heroes 2 is such a tactical game. Typically, I’m used to just sending all my forces straight on down a path into their doom. Now, I can send a few down the normal path to distract the enemy while another team is sneaking around to flank them.

Later in the presentation, we see that pinning and suppression is back. If the enemies have a heavy machine gun in place, your forces will drop to the ground and crawl on their bellies in order to avoid the fire. After a few seconds of this, the Soviet squad leader orders a retreat, which ends up being a bad call. 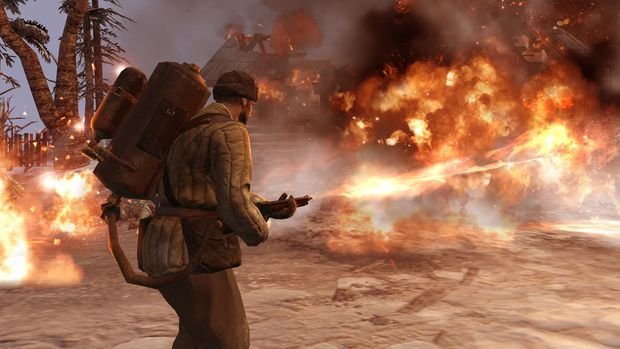 Stalin had signed into place Order No. 227 during World War II, which forbid Soviet soldiers from retreating. Doing so was to be treated with death, which was what happened with these particular soldiers as another commander gunned all the retreating soldiers down.

Probably the most striking new addition is the TrueSight system. Instead of the traditional fog of war system most RTS games have, you’ll only be able to see what your soldiers can see via their line of sight. Objects like buildings and trees can block their view, thus blocking your view as well. This lends itself pretty well to sneak attacks, and even extends to stuff like mortar strikes, where the explosion kicks up smoke that can block your view. All this also applies to the enemy, so they’ll be just as blind as you.

The Artificial Intelligence has been greatly improved, too, as Relic redoubled their efforts to make everything seem more realistic. Soldiers will move away from explosions, regroup around cover, hide behind objects when they’re near them and so forth. It’s small stuff from what I saw with my limited time, but I’m all about less babysitting.

Sadly that’s all we got to see. Relic wasn’t talking about much else, but note that you can expect competitive and co-op multiplayer too. Even at such an early stage, Company of Heroes 2 easily looks like one of the best real-time strategy games to depict the Eastern Front.