We’ve been seeing bits of pieces of upcoming PS3 game God of War: Ascension since last year, but we’ve really only seen it’s multiplayer side. That changed this week when director Todd Pappy and his team unveiled the game’s single player side at a press event in Los Angeles. And instead of some controlled, limited demo, they just plopped down the first 30 minutes of the game in front of us, letting us play it as if we just popped in the disc. And instead of forcing me to recap the whole thing for you, they’ve given us video of exactly what I played.

In the video above you aren’t seeing my play through, but you are seeing pretty close to what I experienced. You’ll see for yourself how good it is.

Kratos’ roots are unveiled in Ascension. While he’s still easily classified as a badass, he’s perhaps a bit less hardened in this prequel story. He certainly doesn’t look like much of a badass in the game’s opening.

After being tortured endlessly by the Fury, the game opens with our hero bound to a platform, with both arms and legs chained. The hideous Fury Queen comes to beat Kratos while he’s down, but a poorly aimed attack from one of her gross, sharp appendages creates an opportunity for his escape. 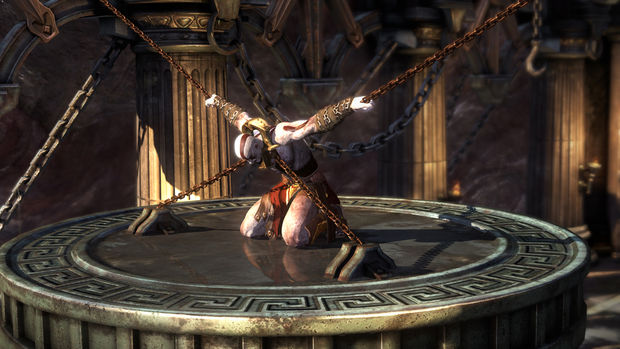 The action slowly ramps up from basic control training to a full-on chase, with the Fury Queen throwing every trick she has at you — level traps, waves of nasty bugs, bugs possessing humans to turn them into beasts, and eventually bugs diving into and possessing the body of a frozen, stories tall ancient brute that I think called Aegean the Hecatonchires. If I’m right, all credit goes to Google’s amazing ability to take misspelled text and turn it into something usable.

As you’ll see in the play through video, the fight slowly scales in scope, from ground level brawls, to in the sky and off the side of cliffs, to later in a moving chunk of ground and building in the sky, held by the reanimated of the previously mentioned ancient monster. And then, as always, huge, crazy bosses. They’ve done some really great work with scale and scope to keep the wows coming. I found myself wow-ing aloud constantly while playing through what you’re seeing. 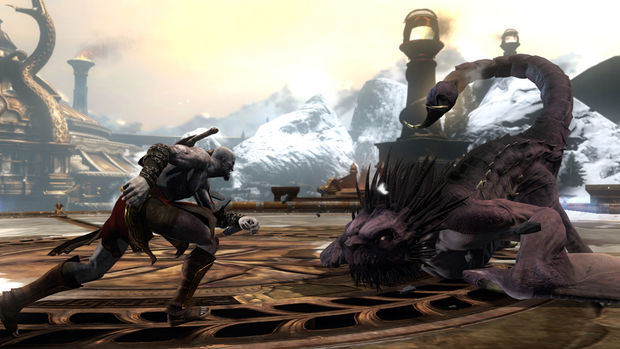 Fighting in the boxed off, floating prison you’ll see in the middle of the play-through was a bit unnerving, from both a fear of heights standpoint and from the tight, constantly moving play space where waves of enemies continued to appear. This is where the opening jumped from ‘nice’ to ‘yessssss’ for me. The tension level also turned up quite a bit starting from this point, gradually increasing up to the hands-y final boss battle (you’ll see what I mean).

I found myself digging into the game’s new World Weapon System from here on out, which has Kratos using new gear like swords and spears alongside his usual blades. The sword I picked up earlier in the stage was great for close-quarters attacks, and I liked playing with the unique finishers that the sword added to Kratos’ arsenal. I’ll admit that I show a bit less finesse in attacks and combo-ing as the grand finale neared (frantic button mash city!), but there was never a time where I didn’t feel like a killing machine. They’ve absolutely nailed that feeling.

You’ll see for yourself how satisfyingly nuts things become in the opening’s final battle, so I won’t get into it too much. The only thing this video won’t give you is color on how Ascension feels. My first takeaway is that it’s smoother than ever before, and that Kratos has never moved so well. It might be hard to put a finger on what exactly was overhauled for this outing from watching a gameplay, but you definitely feel it when playing. 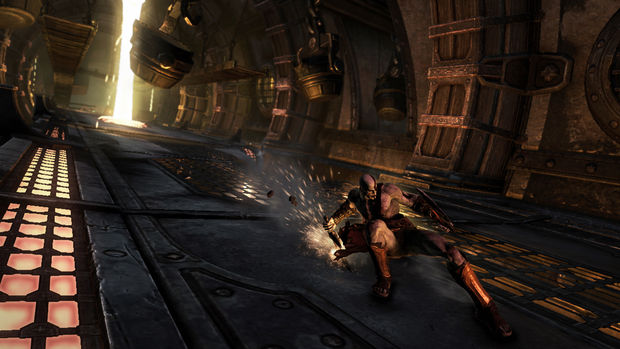 His new moves also feel nice. If you want a break from slinging chains, new weapons like the previously mentioned sword feel faster and more responsive. Mixing up the action between the two adds a new dimension to God of War combat that I’m looking forward to exploring more. Oh, and Kratos can slide down walls now. This feels and looks fantastic.

One of the game’s staff had to cut me off after this boss battle, as this was not some finite demo. It could have kept going as someone from Sony told me that we were playing a final build. Damn that guy!

But that’s how well Sony Santa Monica has done with God of War: Ascension’s single-player — I wanted to keep going. Get ready, as this is going to be really good. Even from my limited half-hour taste, I can’t see God of War fans being any less than absolutely thrilled with Ascension.