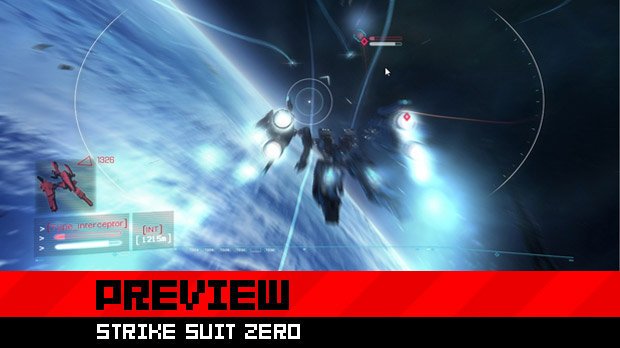 Born Ready Games has a vision to revive large-scale space combat as a viable genre in the vein of games like Wing Commander and Freelancer. With their new PC venture Strike Suit Zero, the company is poised to do exactly that.

Taking place in various reaches of space, Strike Suit Zero sports an excellent soundtrack by Paul Ruskay of Homeworld fame and an objective-based mission structure that will deeply affect the final outcome of the game.

During my extensive hands-on time, I had a chance to check out two huge missions that involved several dogfights and a few tough battles against huge frigates and other large ships. In both of these missions, I had a chance to really get a feel for the Strike Suit that the game is named for; a transforming ship that doubles as a massive mech suit. 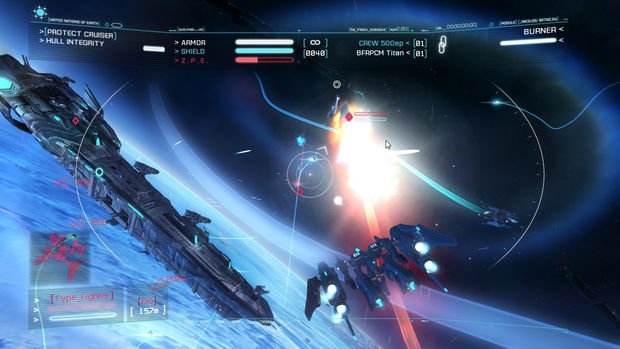 You may have seen the trailers for Strike Suit Zero floating around here and elsewhere on the Internet, and the glimpse of giant mechs may have gotten your mind to imagining some heavy duty ground combat sections. This may be a bit misleading, as I was informed by the developers that Strike Suit Zero only takes place hovering thousands of miles above any sort of solid ground, if anywhere near it at all.

However, I would definitely urge you not to be disappointed by this news, as the primary transforming mech suit more than makes up for it with its incredible versatility in space warfare. Even with a pre-beta build that we had a chance to play, the combat was both challenging and engaging.

In the first mission we previewed, the first large-scale battle took place against a great deal of smaller ships. This helped me get a feel for the basic controls, which are generally mouse and keyboard controls with a few adjustments relating to boosting and extra movement in the Strike Suit. Gamepads and joysticks are also supported, though I stuck with the typical PC controls. 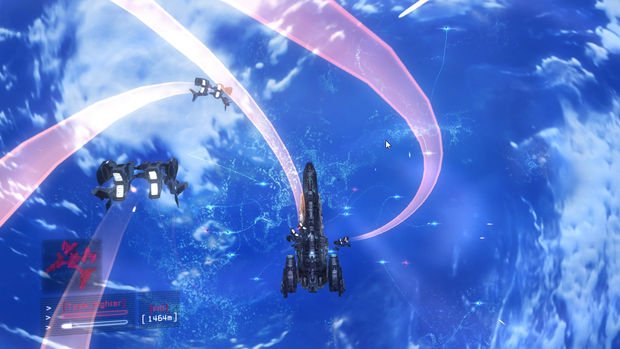 The mission’s storyline involved coming to the aid of a destroyed Earth base in the midst of a massive civil war between colonists possessing a powerful technology and those still remaining patriotic to the planet. The sense of a large battle taking place was in full effect, as ships on my side engaged in dogfights while I tried my best to keep hordes of enemy ships in my line of fire.

With a press of the spacebar, my ship would quickly transform into its mech state — provided I had enough “flux.” In this mode, I could hold down the right mouse button to paint several targets and release it to let go of a barrage of missiles that destroyed several targets at once.

The Strike Suit also can dash quickly out of the way of incoming enemy projectiles in full 360-degree movement, and shoots powerful machine gun bursts as its primary weapon. Flux is gained by taking down enemies in chains, and it is entirely possible to stay in this more powerful mode provided you can keep chaining kills and refilling your flux bar. 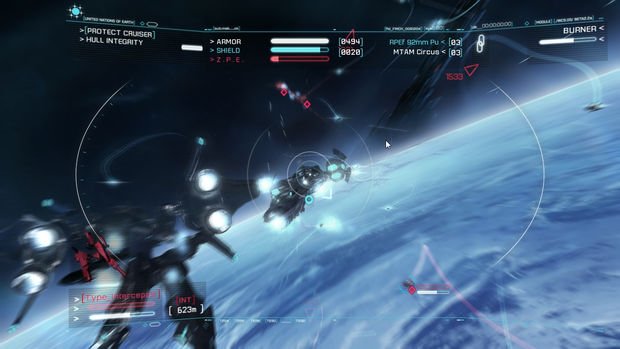 At one point during the session, a comparison was made regarding the space combat to Max Payne — which I found a little strange at first, but as soon as I figured out how to effectively use the Strike Suit, this comparison completely clicked. As you’re battling enemies, you learn quickly to switch back and forth in rapid bursts between your mech suit and your regular ship to effectively store flux and keep enough power stored for stronger enemies.

One of the biggest strategies — especially in the later parts of the second mission we previewed — can be found in quickly switching to your mech suit to paint a few targets and dodge a few missiles before switching right back to your normal ship mode and boosting out of harm’s way. This definitely did give off a similar vibe to Max Payne‘s bullet-dodge mechanic, as it was all about the best timing to get into a special mode before painting several targets and leaping out of the way. 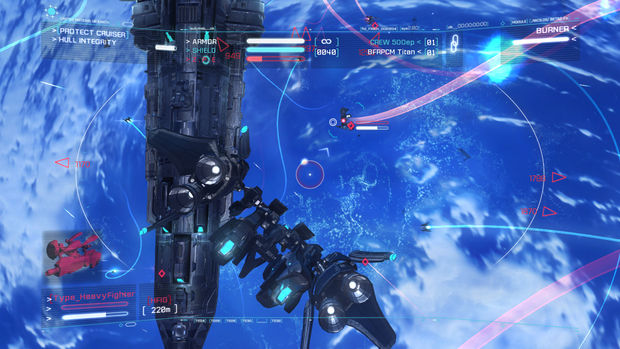 As mentioned before, the game was still in a pre-beta stage so although there was narrative and storyline built in, it was given to us by a hastily Photoshopped and distorted picture of a young and much maligned male pop star as a space commander with a robotic female voice.

Of course, we were told to ignore this early build stuff, but in a weird way, it sort of worked. Granted, I’m sure the actual narrative will be handled much more professionally but like early screenings of movies where character dialogue has some odd kinks to be worked out, it was still sort of fun to see some effort put into getting the story and dialogue at least set into place.

Overall, I really believe Strike Suit Zero will do an awesome job in reviving the space combat genre for those who grew up with and loved games like Wing Commander. It has intelligent, tough enemy AI and a great Strike Suit advantage that prepares you for the challenges ahead with powerful defensive and offensive abilities. The eerie, otherworldly soundtrack is certainly no slouch either.