A friend once told me he thought fighting games had cool characters. After he wiped the blood from his head, he quickly apologized to me and said, “Perhaps I should rethink that statement.” Then miraculously, out of a nearby TV jumped Roger from Tekken, Voldo from SoulCalibur, and Rufus from Street Fighter. Though I wasn’t surprised in the least, my friend stood perplexed as he watched Roger jump around adorably, Voldo slither on the floor and hiss in a homoerotic fashion, and Rufus consistently break wind while yelling PG-rated obscenities because, you know, he’s American and we’re all fat and obnoxious these days.

Just in case anyone couldn’t tell by my facetious little anecdote, I’m not the biggest fan of the genre. From an outside perspective, most of it looks silly and doesn’t seem to change much. So when the opportunity to preview Street Fighter X Tekken came up, I thought, “F*ck it, I’ll step outside my comfort zone.” The result was a loud, bass-laden event, filled with sweaty geeks, free drinks, and lines of kiosks featuring a game I knew little to nothing about.

I had a mission with three objectives: one, find out why people liked Street Fighter X Tekken, two, figure out what I liked about it, and three, GTFO. 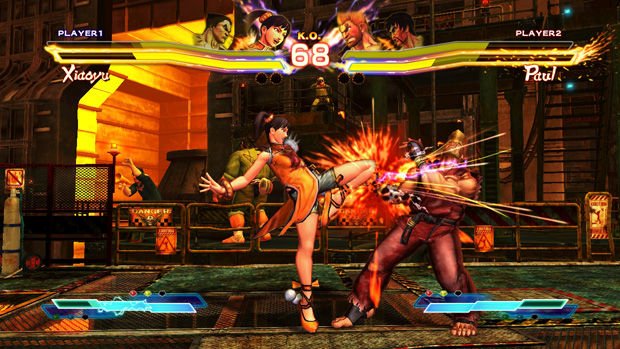 Something about competition and skill

After a few whiskey sours, my overwhelming anxiety amidst the crowd of warm, odorous bodies began to die down (yeah, I’m a freakin’ mess at public events). I eventually snuck away from my fellow Dtoid peons and proceeded to watch people play the game then interview the losers as they gave up their spots.

After one particularly close game — close enough to evoke a roar from onlookers — I asked the loser, Daniel, about those moments after a defeat. “Sometimes you get a rush that, win or lose, you walk away from feeling pretty pumped,” he told me. “Sometimes, though, it feels like your five-year girlfriend has just broken up with you … leaving you with a broken heart.”

Although I haven’t dedicated much time to this genre, I could see where Dan was coming from. These guys aren’t button mashers. They’ve studied these games to the point where certain characters are like extensions of themselves. “You basically pick your pony and roll with it,” Daniel added. “After enough practice, everything becomes second nature, and you focus more on the other player than yourself.”

I’ve never really had anyone explain this genre’s gameplay in that way before. Any gamer can understand what it’s like to know a game so well that you don’t even notice your own actions — you just do things impulsively. I’ve gotten great at games that require a lot of time to attain that sort of intuition, which includes those “hell yes” moments upon victory. The appeal of Street Fighter X Tekken was starting to dawn on me. 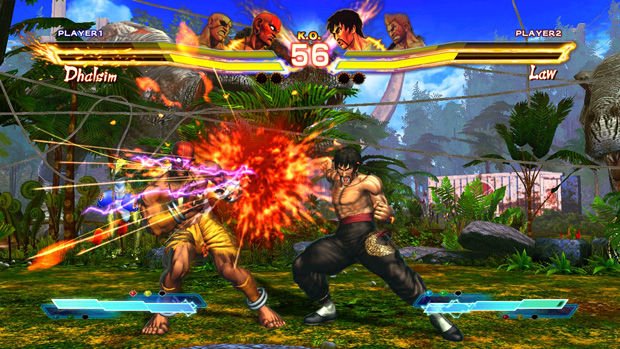 At the same station, Daniel’s victor had lost the subsequent match. As the woman, Jessica, walked away with a bit of a satisfied grin, I asked her something I had asked Dan: What’s the most attractive thing about these games? “Are you kidding?” she exclaimed. “Where else do I get the chance to beat the crap out of other guys?”

After I took a step back, I asked her to elaborate on her statement. “Fighting games don’t have much in common with others,” she continued. “I mean, other games sometimes have fighting gameplay, but they don’t have the kind of depth or all-out aggression that games like Tekken have. I can’t really find other games like these.”

What Jessica said made perfect sense to me. Once you look at the medium as a whole, fighting games really are a standalone genre. It’s easy to find minute similarities between other types of games, but ones like Street Fighter X Tekken are about as pure as they come. Fighting games haven’t changed much and that’s exactly their appeal — no extra baggage that others have accumulated over the years.

This, to me, seems like a big a reason why these games have held on for so long. While other genres have slowly melded together into a lineup of little distinction, series like Street Fighter and Tekken have retained what made them appealing from the start. Because such an undiluted experience can’t really be found elsewhere, fighting games have managed to retain a substantial following.

Another point goes to Street Fighter X Tekken for appeal. 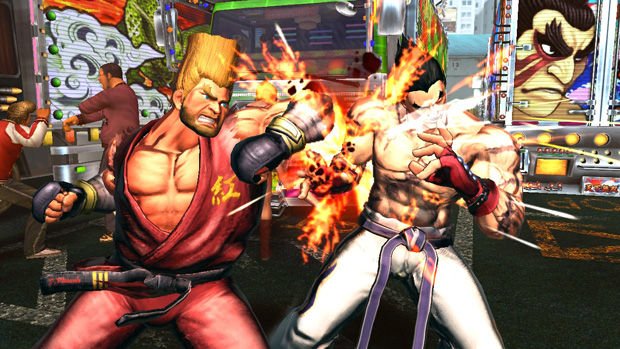 Eye gouging me with good looks

Street Fighter X Tekken‘s aesthetics are basically a throwback to the old sprite-based graphics of the genre’s earlier years. Whenever other franchises try this approach, though, the results are usually either overly simple toon shading that looks boring or the exact same visual style from that genre’s inception. Thankfully, this is not the case with Street Fighter X Tekken.

Sweet cinnamon-swirled Christ, this game is gorgeous. The textures on character models and backgrounds have a very painterly feel to them, breathing new life into a medium that’s overloaded with technical trickery. Most other titles use straight power to cover up their shitty art, but this game lets the talent of its visual designers shine through. It’s especially interesting to see the Tekken characters with such colorful personality — at times, Heihachi looks like a cute, huggable elder.

The slick art direction is greatly complimented by smooth animation as well as vibrant and striking particle effects. Fighters’ moves connect with a sort of fluidity and flare that makes them actually seem like they’re doing some damage. Ultra combos are presented in the type of exaggerated style only found in Japanese animation; some of them even got me laughing at how insane they were.

In this age, it’s getting more difficult to dazzle people with visuals. Fortunately, Street Fighter X Tekken doesn’t try to make the Xbox 360 or PlayStation 3 sweat via shaders and maps. It knows exactly what it’s trying to be — an insane roller coaster of dropkicks and haymakers — and doesn’t pull any punches whatsoever, no pun intended. You are definitely going to anticipate every character’s different moves, because each one is pure sex for the eyes. 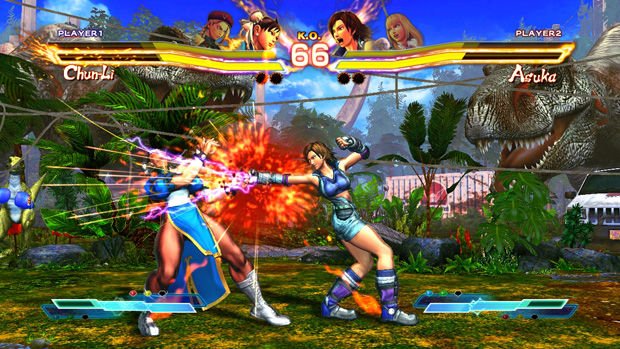 As a previewer, my job is to remain objective about each gaming experience and only deliver the facts. I’m not here to sell a game; I just state what I found interesting and worthy of keeping tabs on. But, son of a bitch, I’ve sort of already made up my mind about Street Fighter X Tekken.

After speaking with two more gamers following Jessica, it was my turn to play. I looked around to make sure no coworker or associates were watching, and then proceeded to have my own digital testicles handed to me. While losing is never a great feeling, I had a blast playing a genre that I haven’t been into since the 90s. I found it particularly nice that certain moves from Ryu and Guile were just as I remembered from older days.

So I kind of want this game now. I’m flat broke, but I’m definitely going to try to pick it up some time after it hits the shelves. I have no doubt that most fighting fans out there have already decided to pre-order Street Fighter X Tekken, but those undecided folks who like fast gameplay, beautiful visuals, and crave an untainted old-school experience should definitely be on the lookout for this title.