Resource wars always strike me as a bit silly. People have so many differences that we don’t have time to be squabbling over energy or minerals. We should be wiping out vegetarians or people that wear the wrong type of hat. In Starvoid, only one commander — the title’s core unit — has a hat. I’ve been gunning for her all week. The opposing players never know this, of course. They only see a man with a giant hammer and squads of vicious robots charging towards them. Naturally they assumed I was just after resources and general mayhem, but no, I was hat hunting.

Unfortunately, the impetus for the galactic conflict in Starvoid is resources. The game is even named after it. Starvoid is spaceship fuel, but the game features no spaceships. Such is the life of a soldier, dying for something you can’t use. It’s the robots who suffer the most, though. That’s what the game is all about — getting robots to blow stuff up. Mainly each other. I approve. 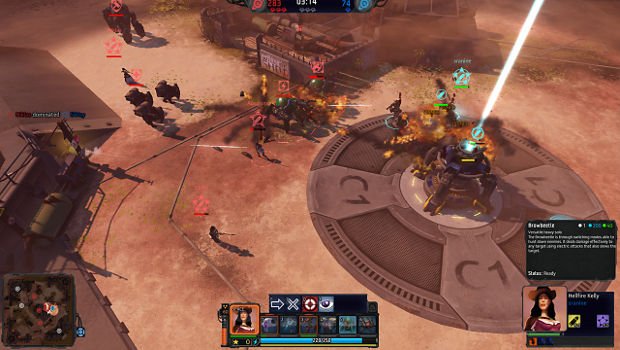 You could be forgiven for thinking that Starvoid was a MOBA title in the same vein as “Defense of the Ancients” or League of Legends. On the surface, it certainly looks like that, with the champions, or in this case commanders, duking it out while surrounded by less powerful minions. It all takes place in small maps, with fast-paced action. However, it’s clear quickly that this comparison is not very accurate. There are certainly similarities, but it’s got as much, if not more, in common with StarCraft or Dawn of War II.

Upon starting up my first game, a battle for resource nodes, I was presented with the class selection screen. There’s a broad range of classes available, from the hard-as-nails melee Assault Commander, to the sneaky long-range Infiltration Commander. Each commander has unique weapons and equipment, as well as those shared across the classes. While you can construct your own “custom contract,” that costs in-game cash earned through battle, and items are dependent on level.

Thankfully there is a prebuilt version of every commander available right from the get go. These folks have plenty of gear that won’t be unlocked until much later on, so you’re immediately given a ton of tricks. I opted for the Assault Commander, a large chap who carried an even larger hammer.

I spawned in a base protected by powerful cannons, which created a safe zone as they could annihilate any foe swiftly. The commanders act as mobile bases, able to summon robotic minions, vehicles and heavy weapons as well as force fields and buffs. They are also skillful combatants. 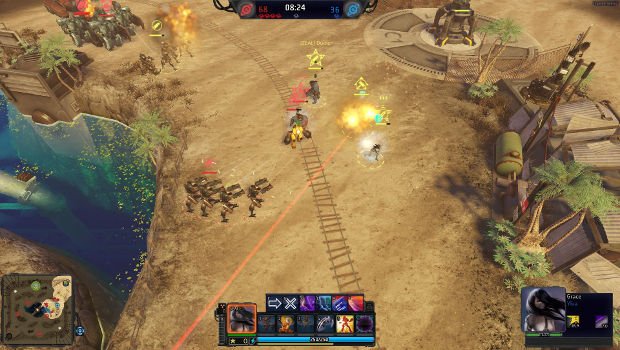 The battlefield looked like a derelict industrial complex in the desert, with hints of the wild west. I summoned my robots, and we tore that place apart. Each unit has an energy cost, which prohibits you from spawning your entire army. They can be outfitted with a variety of weapons and equipment, from flamethrowers, to speed enhancements. I had some rangers, some heavy chaps with shields and cannons, a tank, and a terrifying worm creature that burrowed. Oh how it burrowed. We made for a motley crew. It looks like the commanders utilize the same technology that Pokémon trainers employ. Pokéballs for everyone.

It was a 12-player map, as they all are, for two teams of six. I only had one opponent. The woman with the silly hat. While the goal was to capture starvoid pumps or some science-fiction nonsense, I ignored this and went straight for the kill.

I’d charge, throwing out my pokéballs and summoning mechanical death. Instead of fleeing like a sensible person my foe would stand their ground, shooting at the roaring maniac with the huge hammer. Being a short-range warrior, my prebuilt commander was constructed around soaking up and dealing high damage, while stopping enemies from fleeing. I had an aura that slowed down movement, a stun attack and one of my units was able to slow targets as well. As long as I didn’t let my opponent get back to her base, I was golden. 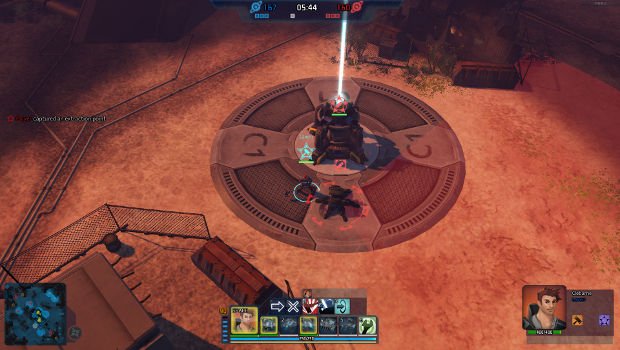 As more players joined, I naturally fell into the role of defending our resources or hunting down enemies while they focused on capping. A significant portion of the players were new to the beta, and it was interesting to see them get the hang of the game very quickly. Instead of having a long list of abilities and actions, commanders and robots only have a couple that they need to employ; the learning curve is easy going. Thus it becomes important to consider positioning, the mix of your units, and how they relate to your allies.

Team Deathmatch is, unsurprisingly, more about wanton slaughter. No capping this time. I spawned right in the middle of a five-player battle, and I immediately got down to business. Two players on the opposing team had made bad hat decisions — I didn’t let them live to regret it. The map we were playing on was covered in narrow land-bridges, making it easy to take sneaky routes and appear behind the enemy. Unfortunately in almost every instance the moment the two forces met they’d stay in one spot and just duke it out.

Killing enemy commander destroys all of their robots, so I’d just run around smashing everything human until nothing was left. I confess to becoming pretty bored with this mode, even when I switched it up with other classes. Upon dying I was thrust right back into the battle. There’s now respawn timer. Instead of spawning at the base, however, I appeared right in the thick of things. It was quite unnerving, but at least I didn’t have to walk anywhere.

The final mode, Sabotage, is by far the most interesting. Both teams must fight to the other side of the map, and drop radioactive materials in the opposing team’s “hole.” It’s simple stuff. Both sides have 500 points, and every player spawns with 10 bombs. Stay near a hole for long enough and your enemy loses ten points. 490 is still a pretty big number though, and once you spend your bombs you respawn right back at the start. Not very efficient. Luckily, you can steal bombs from the corpses of fallen foes.

I found my previous tanking strategy failing me in these matches. It was peak time and the server was busy, the teams were full. I’d charge at a lonesome commander, only for an Infiltrator to appear on the ridge above me, her robots fighting mine; her sniper rifle aiming for my skull. Or a heavily shielded engineer would come up behind me, dropping down heavy ordinance to take my bots out from afar. Team work was paramount, and I wasn’t being a great team player.

I was legging it. I had over 70 bombs and I was ready to deposit my load. I still had half the map to cover. My rangers were ahead, doing recon. I didn’t want any surprises. My tank was following behind, the slowest unit in my squad. An enemy commander broke out of stealth for just an instant as she passed my rangers. She was on her own, yet to summon any bots. I could take her, I thought. But I had so many bombs. Could I risk it? I took the safe route and went the long way around. It was a narrow pass. I could keep going, or I could turn back. There were no other options. I charged ahead — right into a giant enemy mobile weapons platform. 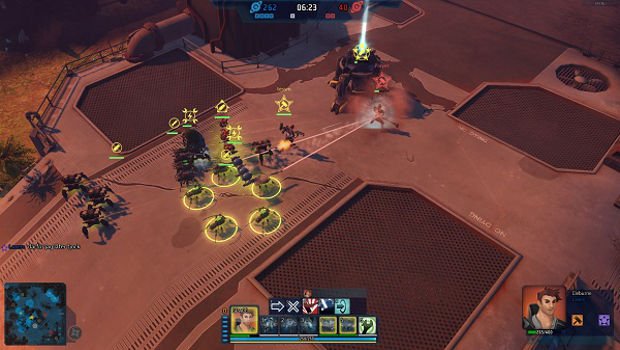 My forces were hammering away at the big gun, but it was still targeting me. I’d spent my break-free ability, and it was slow going, crawling back the way I came. As I made to the entrance I was welcomed by a terrible sight. The stealthy bugger from earlier. Screw running, I thought. I raised my hammer and went to town.

The battle ended quickly, thanks to my heartiness and my foe’s ill conceived attempt to attack without support. Near the end of her life she started moving away, I knew the signs, she was about to teleport out of reach. This wasn’t my first time at the rodeo. I’d been saving my stun for just such an occasion. Two strikes and she was a goner. I had no time to celebrate, however, as the final barrage from the gun behind me rendered me quite dead.

At ten minutes long, battles are not huge time investments. Plenty can happen in that time, especially with the breadth of units and abilities, but even if a match doesn’t go your way, you’re still only ten minutes down. The short matches, easy-to-pick-up mechanics, and the ability to use higher-level gear early on makes this a game with a low barrier for entry. The diverse classes, plethora of options, and extensive upgrades gives it a lot of depth, however. It can most certainly suck you in.

It’s definitely worth keeping an eye on, and there are plenty of ways to get a beta key from Facebook to the Paradox forums.