I imagine our Reviews Editor, Jim Sterling, isn’t alone in yearning for PlayStation Move-exclusive titles beyond the scope of minigame collections and tech demos. Sony announced one such game, Sorcery, back at E3 2010, but hasn’t shown much of it in the eighteen months since then.

I’m glad to be able to confirm that it still exists — in fact, I played it last week at a PlayStation Holiday Showcase in New York. What I can’t yet say is whether it will turn out to have been worth the wait. 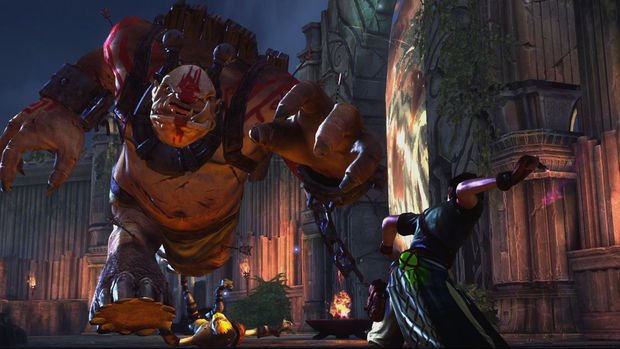 Sorcery’s senior designer and creative director, Brian Upton, opened my demo by pointing out the principal difference between this and other motion-controlled games. “A lot of motion games basically boil down to Simon Says,” he told me, explaining that such games typically throw up gesture prompts at certain points and ask you to merely repeat those gestures in order to win. Sorcery is certainly a gesture-based experience as well, but it’s one that puts the onus on you to forge your way ahead with the tools at hand. 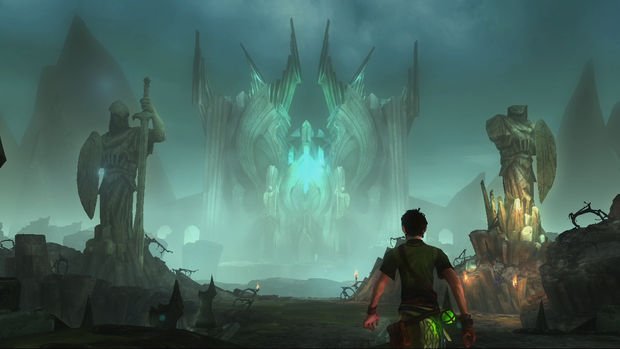 The protagonist is a young sorcerer’s apprentice who’s just starting out in the world of wizardry. His master’s cat dares him to venture into Lochbarrow, the land of the undead, and — being a carefree young farm boy — he does. In this case, their curiosity only results in the apprentice accidentally unleashing the power of nightmare upon the world. So the two of them set off through the Faerie Realm to right this cosmic wrong, and perhaps do some growing up along the way. The cat serves as a feline Navi of sorts: she doesn’t participate in gameplay — Upton assured me that “there are no escort missions” — but provides hints and gives out bits of story. She has a deep knowledge of, and involvement in, the world; the bond between boy and cat intensifies over the course of the game.

Upton showed me a world partway through the game called Endless Stair, and noted that for the purposes of the demo, the developers had armed the apprentice with abilities he wouldn’t actually have access to at that point in the full game. Endless Stair is a bright, colorful outdoor area, with an aesthetic that instantly reminded me of the PlayStation-era Spyro games (Upton could see where I was coming from, but told me that the team didn’t specifically take inspiration from that series). 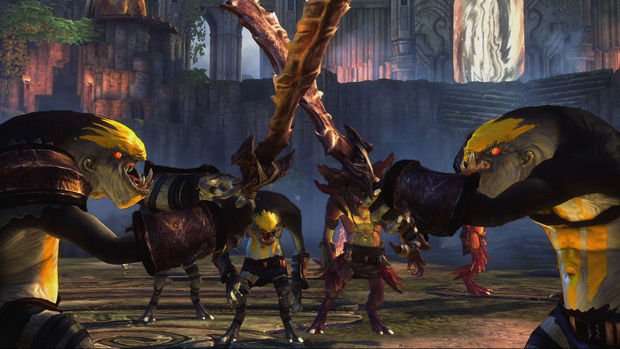 The apprentice came upon an open area with numerous bogies, the world’s basic grunt enemies, waiting to take him down. As a mage-like character, it behooves you to engage in mid-range combat, firing away with your projectiles and area-of-effect spells; enemies are much more dangerous at close range, and melee isn’t your strong suit. Upton made quick work of the bogies, showing off a variety of elemental attacks.

Arcane Bolt is your standard projectile attack; you can fire straight ahead, or twist the Move wand in your hand for an arcing shot. It becomes much more powerful when combined with other elements. Upton laid down a trail of fire — which you are impervious to — and then shot bolts through the flames to set enemies alight. He then switched to wind and whipped up a “Firenado” after throwing down some more fire. I can think of few things more terrifying than a flaming vortex careening toward me, and indeed, it proved supremely effective against bogies hiding behind rocks. You also have ice powers at your disposal, which allow you to encase enemies in blocks of ice (for shattering with Arcane Bolt) or slow them down with a gradual area-of-effect frost. 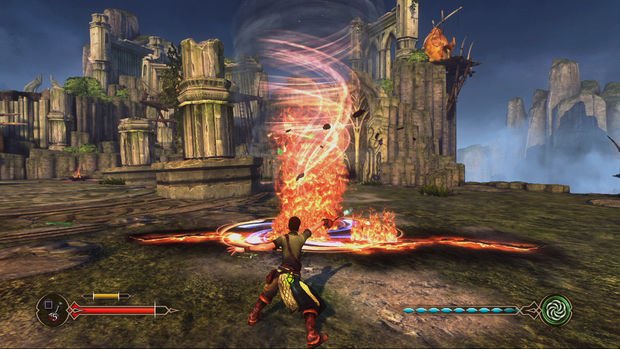 Switching between elements requires quick gestures with the wand while the Move button is held down. (Upton told me that in light of focus testing feedback, The Workshop will implement button controls for spell switching.) However, he asserted that “once you learn [the gesture system], it’s really, really fast, and lets you do these powerful combos.” The team also noticed during focus testing that players who were familiar with motion games immediately began to waggle furiously, firing off many bolts in quick succession. Sorcery goes out of its way to teach players not to do that; while the game doesn’t get too difficult, Upton warned, “If you just spam bolts, you will die.”

After defeating his foes, Upton picked up a sigil fragment that one of the bogies had dropped. He then brought it to a group of broken rocks and used a mending spell to patch up the stone. Stepping on it opened up a portal to a new area, with a chest and a large urn from which water dripped. The gold that Upton looted from the chest can be used to purchase potion ingredients from an alchemist, and the alchemy system allows you to brew dozens of different potions that bestow upgrades upon you when consumed. Your other main ability is telekinesis; Upton used it to rip off the urn’s lid, flooding the area below. 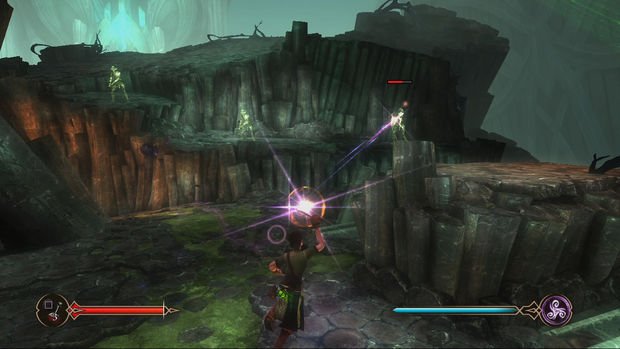 The control method, with a Move wand in your right hand and a Navigation Controller (or DualShock 3) in your left, feels good. Yet Sorcery offers limited camera control and no lock-on targeting; when I expressed trepidations about that to Upton, he dismissed my concerns. The pinpoint control that PlayStation Move offers, he said, obviates the need for the control scheme seen in typical third-person action games. Sorcery manages the camera for you, and Move is accurate enough to ask players to simply aim where they want their attacks to go. In my experience, it didn’t quite work as Upton described. Then again, I did inadvertently rotate the Move controller “backward” in my hand (with my thumb, rather than my index finger, near the trigger), which throws off the Move’s targeting. It was much smoother sailing once I fixed the wand’s orientation. Either way, the development team is still tweaking the targeting, and I hope it’ll be as good as it needs to be by the time the game launches next spring.