The contemporary online first-person shooter has a well-established formula at this stage in the genre’s history. Start a match, shoot stuff, gain XP, unlock stuff, rinse, and repeat. It is a formula that has worked well for the titans of the FPS scene, but made it hard for a new IP to stand out when their multilayer offerings look too familiar.

ShootMania Storm, then, aims to find its footing by turning the clock backwards, removing any and all semblance of a progressive upgrade system, and shifting focus purely on tight, reflex-heavy twitch shooting. So far, I say, so good. ShootMania’s stripped-down approach to the genre works in the best way possible. 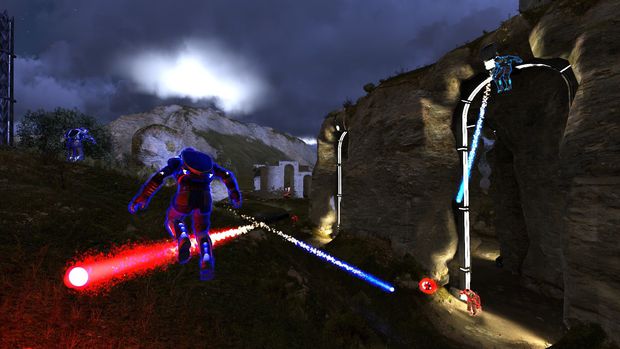 ShootMania is already out in beta form right now, so some of you will already be well acquainted with the information presented here. This game is a hyper-kinetic arena shooter in a manner not unlike the Quake and Unreal series. What makes it so unlike these other titles, though, is just how pulled back and minimal the design is.

There is no progression-based leveling system, no fancy guns or gadgets to unlock, and no loadouts.In our session with it, there weren’t even any weapons other than the default starter. It’s a puzzling way to approach the shooter genre, especially in today’s customization-crazy market, but get your hands on the game, and you will see that it works on a number of levels.

Fist, by not having a leveling system, the focus of the game as whole is taken away from your next endorphin-releasing weapon unlock, and shifts it squarely on the moment-to-moment gameplay. With the actual fun of the game, and winning, being your actual reward, so to speak, players have their attention ripped from their weapons and redirected to the objective. With winning being your sole focus, this not only encourages team work (of which you’ll need plenty), but also cuts down on players’ almost instinctive urge to focus on their kill count. 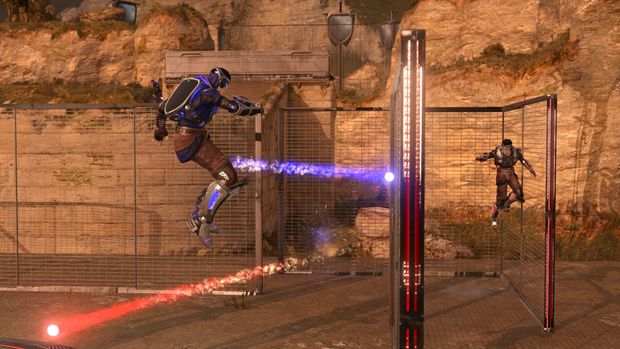 The lack of alternate weapons changes things up quite a bit as well. In nearly all shooters that have power weapons spawn on the map, the first couple of minutes of almost every game type consists of a mad dash to get that awesome sniper on top landing, or dive for the powerful rocket launcher on the lower floor. Even in games where all the weapons are chosen via loadouts, it is often easy to cry foul (Akimbo FMG9, anyone?) due to weapon imbalance. ShootMania gives you one, and only one, default blaster to shoot with. The default gun is a sort of jack of all trades, as it will change its firing function depending on you place in the map.

When running through the middle, and other higher-traffic areas of the map, the blaster fires in its standard form. Take a position on the high ground, and your gun has substantially more range, almost like a sniper. Or if you find yourself running through the tunnels and other close quarters areas, the blaster spread will lose range and have a high amount of spread, not unlike a shotgun.

The gun runs on a charge too, with four shots depleting the battery before it needs to be recharged. While charges refill very fast, there are small delays between each shot that force you to regulate your trigger finger. And with Halo: Reach-style reticule bloom, you sacrifice aiming for a quick fire rate, so timing your shots becomes even more imperative. 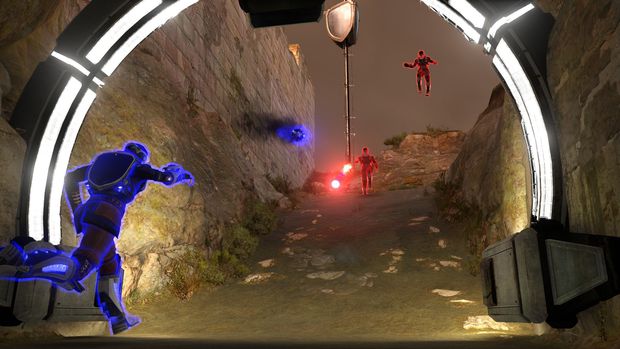 With very little in the way of guns, ShootMania offers a substantial amount of personalization with its level editor and community sharing tools. Coming from Nadeo, the developer most known for TrackMania, ShootMania offers a great deal of player freedom by not only allowing you to create maps, but game modes as well. Even now, in beta form, the creation tools are sizable. Our time  was spent with a community-created map and game type.

A variation of Capture the Flag, Speed Ball tasks both teams with capturing a neutral ball in the center of the map and taking it back to their base to score each round. The first team to five points takes the game. Played on a community map built in the environment Storm, verticality and movement played a role equal to twitch reflexes and dead-eye accuracy in winning. It’s this type of community-driven support that Ubisoft and Nadeo are hoping will give ShootMania legs, and it already seems to be off to a great start.

If less is more, then ShootMania certainly has quite a bit working for it. Breaking the mold by taking away most everything players expect is a daring move, but it certainly seems to be working. Shifting FPS focus from accessorizing guns to decimating foes is a welcome breather from the norm, and the community tools are a great way to add legs to the experience. Those intrigued enough to take the plunge can do so now with the premium beta, or at least keep an eye on this one until its release later this year.