The bleak, ruddy Martian landscape comes into view as Commander Shepard, Ashley Williams, and James Vega descend upon the Red Planet. Massive sandstorm clouds billow in the distance, their monolithic surface broken only by periodic flashes of lightning. But do they pose a more perilous threat than the yet-unknown reason for the loss of contact with a Martian base, the situation that Shepard’s crew has been sent to investigate?

This is the way one of Mass Effect 3′s early missions kicks off. I spent about half an hour playing through it at an EA press event in New York last week, after seeing demos of two Mass Effect mobile experiences. While I didn’t make it to the end, the session left me with plenty to discuss.

I should note that nothing has changed between my co-op preview and now, in terms of my familiarity with the Mass Effect franchise: I still haven’t played either of the first two games. But BioWare has been insisting all along that while ME3 will of course provide the conclusion to the trilogy that longtime fans desire, it’s also a viable entry point for newcomers.

[Editor’s note: I kept this preview as spoiler-free as possible, but if you’ve been avoiding ME3 stories so you can go in blind, you may want to skip this article. Heck, why’d you even read this far? –Samit] 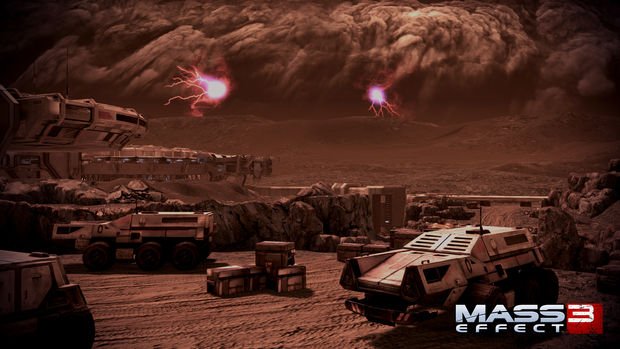 Each demo station featured a default male Shepard of the soldier variety, in a fresh ME3 game with no save data imported. Once we landed on Mars, the game presented me with an upgrade screen in which I could allocate skill points to each member of my party. An EA PR rep explained that the series’ RPG elements, which BioWare streamlined in Mass Effect 2, have returned in full force for ME3. This also applies to weapon upgrades: you’ll find attachments that you can graft onto your guns at workbenches. And for quick orders in battle, you can assign one power from each party member to right/left on the D-pad. 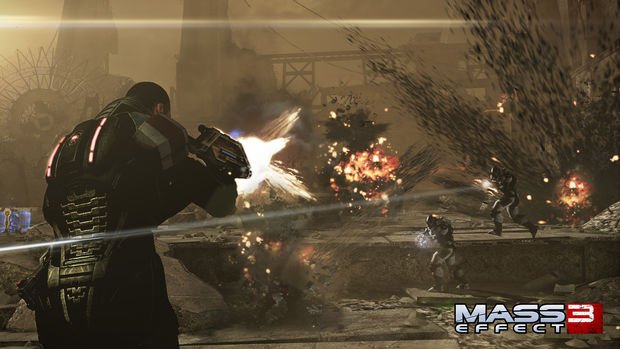 After customizing my characters, I headed in the direction of the facility, an imposing white metal structure that stood in stark contrast to the rusty Martian surface. A cutscene soon played, showing Cerberus agents executing employees of the base. I immediately fired upon the soldiers, igniting a shootout among the rocks, crates, and vehicles strewn about the clearing. Shepard’s rolling dodge came in handy, and my pistol discharged rounds as quickly as I could hammer the right trigger. Many action RPGs suffer from putting story ahead of gameplay; I’ve heard that the combat in the first two Mass Effect games is serviceable at best. That doesn’t seem to be the case here: while I don’t have a point of comparison, I can say that I had no issues with the responsiveness of the gunplay in ME3.

Soon after fighting my way inside, my trio ran into a room filled with the clamor of gunshots and metallic thumps. The sounds emanated from the air vents, and Shepard’s crew took cover until an old friend, Liara T’Soni, popped out of a vent and finished off the Cerberus operatives who had been chasing her. Here, Shepard ordered Vega to return outside and secure an exit strategy, and Liara replaced him in the group. 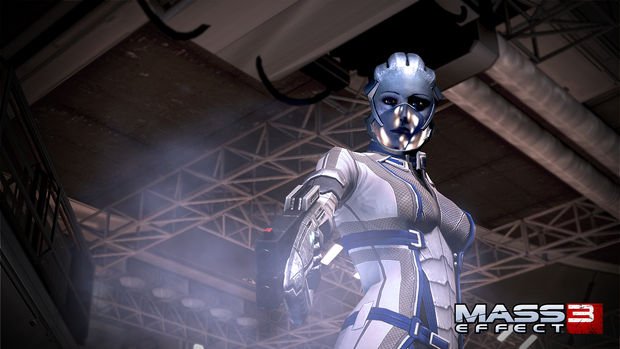 Once she came along, the work of lead writer Mac Walters and crew really began to become apparent. I didn’t know any of these characters or their backstories beforehand, but the ME3 writers have done an excellent job of implementing expository dialogue in cutscenes without it feeling forced. Even in my short session, the cutscenes elegantly conveyed the history between the characters — whether through Ashley questioning where Shepard’s allegiances lie (due to his past work for Cerberus), or with a lingering look of longing from Liara in Shepard’s direction.

The good doctor explained that the facility’s archives contained a Prothean artifact, and after we were stymied by a locked door, it dawned upon us that the mission came down to a race for the technology between us and Cerberus, who were quickly sealing off the base. From there, skirmishes became more heated, as a wider variety of enemies pushed me to use my teammates strategically. Liara’s biotics proved effective on shielded foes: I instructed her to lift them into the air, arms flailing slowly, to give me a free shot. 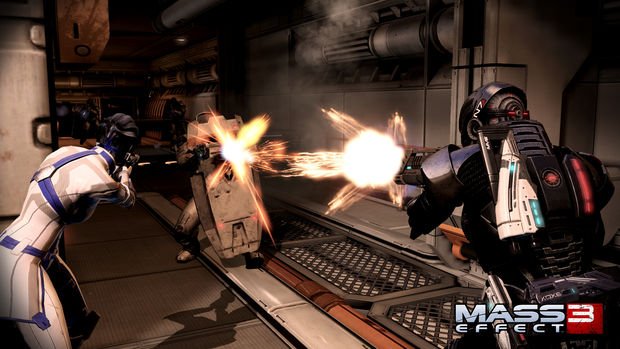 A tramway in the distance would ferry us to the archives, but we had to step outside in order to get to it. Unfortunately, the fast-approaching dust storm had just about arrived, wreaking havoc on Vega’s radio signal. The three of us quickly returned indoors and made our way to the tram, hopping into a creaking cable car. Shortly after it started moving, it halted with a jerk, and Cerberus forces began taking potshots at us from the landing platform.

Sadly, my time with the game ended there. Even as a first-time Mass Effect player, I felt drawn to the mission and immersed in the game’s sci-fi universe, equally charmed by the story, combat, and RPG elements. I couldn’t grasp the significance of most of the terms that Shepard, Liara, and Ashley were bandying about, but I wanted to keep playing and learn more. Personally, I still wouldn’t dream of touching ME3 without having at least played its predecessor, but my session instilled faith that if you want to jump directly into this game, you’ll likely be able to enjoy yourself without feeling completely lost.

Try ME3 for yourself when the demo, with single-player and co-op content, launches tomorrow.