So, before Rock Band and Guitar Hero made Harmonix a household name by filling our homes with plastic instruments, the company had been pushing their first music-based games, FreQuency and Amplitude. These were actually very similar to the peripheral-based titles, in that the player traveled down a track hitting markers in a pattern set to the notes played by a specific instrument in a song, but the player is responsible for keeping all of these tracks going simultaneously by hopping from one to the next.

Ten years and a string of high profile successes later, Harmonix is taking everything that they’ve learned (and acquired) and are going right back to where they started with Rock Band Blitz. 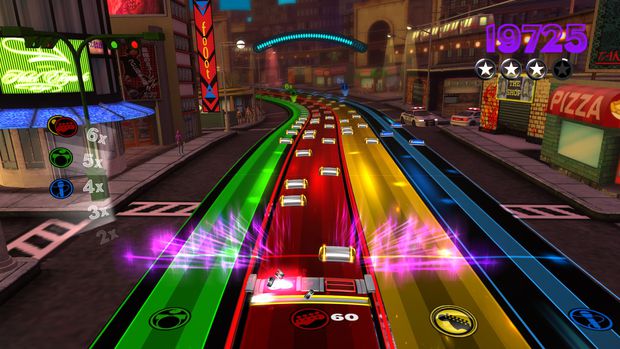 In Rock Band Blitz, players (represented by a flat, sliding target marker of sorts; we’ll call it a “sled”) are carried down a track made up of multiple lanes, each lane representative of a different instrument or component of a song. There’s a drum lane, a bass lane, guitar, vocals and a fifth lane which constitutes keyboards or other instrumentation.  As the tracks progress, note markers on either side move toward the bottom and the player must time button presses on their controller with when these notes collide with the sled.

That’s the first big thing to note. This is the first Rock Band game which uses a traditional controller to handle all aspects of play. There are no plastic controllers to pull out and no living room to set up. It’s also less of a group experience as a result, but Harmonix is wisely implementing social elements to accompany their leaderboards. Players will be able to issue song challenges and taunt their competition through the game and the different console messaging systems. This is the feature I’m most looking forward to, as I’m a sucker for any opportunity I can get to flaunt a high score and can’t wait to start up some intense rivalries (it’s on, Chester!).

As the player successfully times button presses, the track fills with color and applies a score multiplier, similar to how Rock Band awards them for perfect playing. When a track is totally filled, it multiplies the score earned from hitting any note by five times and tracks drain out over time as they are neglected, reducing the multiplier. This means the player is constantly moving hither and thither, like a plate spinner on a variety show, keeping everything going all the time.

It sounds hard, but it’s not really. Anybody with experience playing Rock Band should be able to pick it up fairly easily. Fans of FreQuency and Amplitude will not only feel right at home in terms of the overall mechanics, but will likely find the game to be pretty easy by comparison as there are only two notes on each track (compared to the three notes per track found in those games*).

Further spicing things up are a series of power-ups which players will be able to select from prior to beginning a song, each triggered in different ways. A bar beneath the sled indicates how much overdrive has been collected from hitting white notes (just as in Rock Band) and this can be expended to use one type of power-up, such as a rocket fired down the track to destroy distant notes early. Other power-ups appear on the track and can be collected and a third, not yet revealed type exists as well. 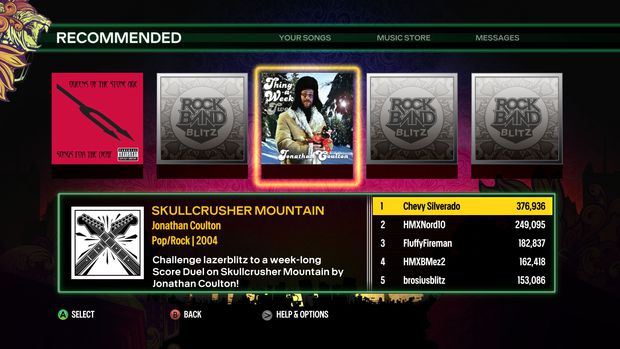 Either way, I foresee Harmonix selling a lot of copies of Rock Band Blitz. It’s terribly good fun, built on a solid foundation and chock full of material. It’s a no-brainer.

*And thank God for that, really. There was a time when I was prepared to reconstruct a Dual Shock 2 controller just to make something to play Amplitude with which didn’t feel awkward.