We’ve already given you the full preview rundown of Harmonix’s return to track-based music games, Rock Band Blitz, but we’re back today with an update preview that reveals new songs and other game features that we missed last time. 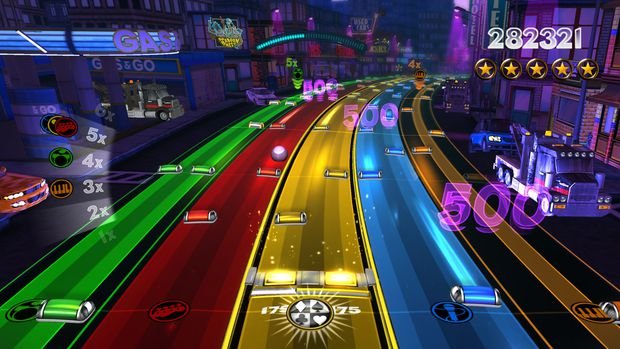 For those that missed our first preview, Rock Band Blitz is a return to games like Frequency and Amplitude, where you’ll glide down a track made of multiple lanes of music, with each track representing different musical parts of a song. You’re responsible for keeping the music going on all of these tracks by bouncing around between them, hitting all the note markers you come across as you glide. And gone are the plastic guitars and drums; you’ll just tap controller buttons to “play” notes on the beat.

Harmonix has learned a few things about music gaming since the Frequency days, especially when it comes to social play. Players can send out challenges in Blitz as well as show off their high scores on the leaderboards. 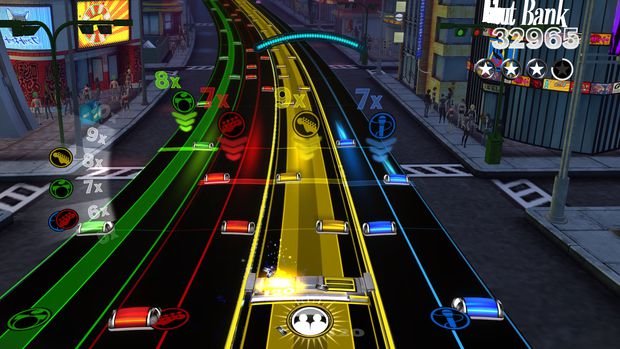 They’ve also learned that people love buying song content to play. A key point for Blitz is that all of that Rock Band content you’ve amassed will be supported in this game, which means that you can give all that DLC new life. And, in turn, the 25 new tracks included in Blitz will be fully compatible with Rock Band 3.

So, while we’re on song lists, here’s some of the new songs we’ve learned are coming to Rock Band Blitz:

Pink’s “Raise Your Glass” is one of those songs that creeps into your earholes and into your head and then stays there until something else big enough comes to push it out. And sometimes that never happens; it never leaves. Knowing that it was late in the day and that I could probably sleep the song off, I gave the song a spin in Blitz. 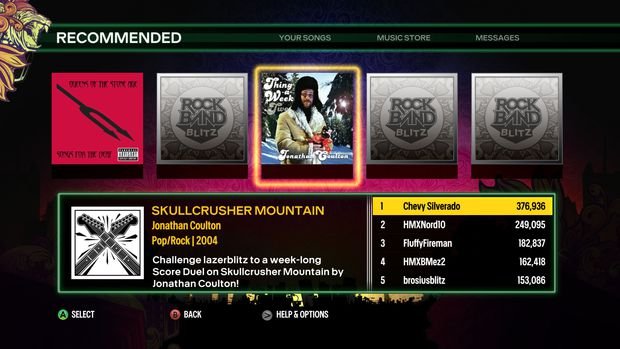 Though I enjoyed Frequency and Amplitude back in my PS2 days, my gaming muscle memory isn’t as developed as Conrad‘s, so I fumbled my first try a bit. Mocking this song’s wretched lyrics, I gave it a second try, this time fully prepared, with the feeling of lane changing now in my fingers.

It turns out that once you get the hang of it, popping across lanes to jump into key parts of songs you already know is quite fun. I tried to stay on the lead vocal and was doing fairly well, but when it got to too hairy I’d jump down to the simple quarter-note kick and snare beat, and then slowly push back up through the bouncing bass line and accompaniment tracks as my confidence rebuilt. Felt good, man.

Once you get you’re groove going, it all makes sense and feels good, and you’re able to start focusing on filling tracks up for score multipliers. And, of course, using armed power-ups is another way to push up that score. 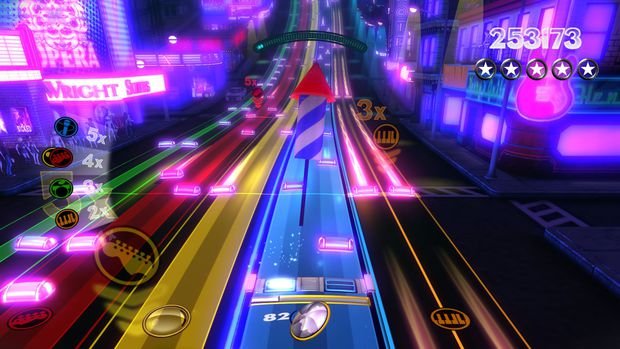 Before each round, players are able to select from several power-ups that they will be able to send out with a filled overdrive bar. We knew of a couple in our first preview, like the note-blasting rocket, or the huge pinball that bounces around the tracks, but now we have details on a few new ones. Expect 15 or so power-ups in the final version of the game, with some cross play available between a few of them. I didn’t get the chance to try enough power-ups to experiment, but Harmonix says that you can, for example, use the bouncing pinball power-up and then send out a shockwave to have them work together.

Here’s a rundown of some of the revealed power-ups for Blitz:

I love music rhythm games, but the plastic guitars were never my thing. This handheld Rock Band action is right up my alley, though. Blitz is pretty easy to pick up, fun to play, and impossible to fail (trust me on that last one). I’d like to raise my glass up to Harmonix as they will never be never be anything but loud. Nice work here, guys.