Everything 2D needs this much style

Professor Layton and the Miracle Mask launched with the 3DS. In Japan, anyway. We’ve had to wait a bit longer. Over a year and a half. You know what they say: Rome wasn’t localized in a day. Thankfully, Miracle Mask is indeed coming to the 3DS in just a couple of weeks for those of us whose Japanese is non-existent.

Set a year after the previous game in the series, Miracle Mask takes place in The City of Miracles, Monte d’Or, a gorgeous, European-style town in the throes of a celebratory carnival that is interrupted by the appearance of The Masked Gentleman whose apparent magic powers terrorize the city. Are you a bad enough dude to deduce the culprit and explain away his mystical magics? 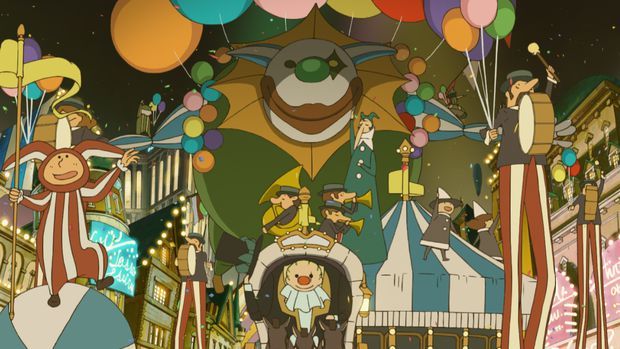 Professor Layton and the Miracle Mask takes place a year after The Last Specter (and its accompanying animated film), making it the second in a prequel trilogy. In addition to its space in the chronology, however, Miracle mask will be reaching back deeper still, as some of the game takes place 18 years prior, in the professor’s youth.

Indeed, Layton, his apprentice Luke, and his assistant Emmy aren’t visiting Monte d’Or for the carnival. The expedition is prompted after Layton receives a letter from a ghost of his past, Angela Ledore, urging him to come and figure out what the deal is with this Masked Gentleman. 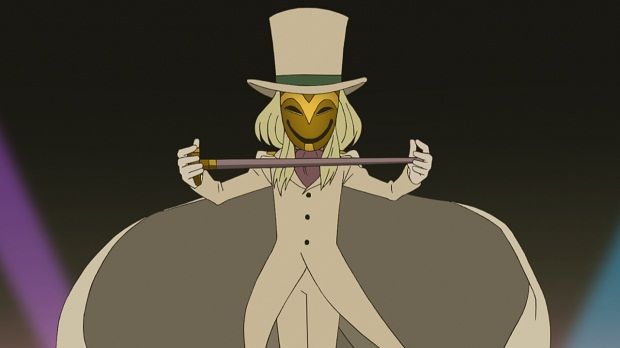 My first taste of the game and its titular villain came in the form of the intro cinematic, which is absolutely stunning. Monte d’Or’s carnival reminded me of a decidedly less grim “The Cask of Amontillado” by way of Paprika‘s parade, though things do take a turn for the worse when the Masked Gentleman interrupts the proceedings, crashing an enormous balloon and turning many of the city’s celebrating denizens into stone statutes. He then flies off, urging Layton and company to give chase in a surprising action sequence.

The trio jump on horseback and the perspective shifts behind Layton. Above the horizon, you can see the Masked Gentleman flying away as you use the stylus to maneuver the horse left and right. To make things interesting, there are occasionally forking roads at which you’ll have to choose which direction to go, while barrels and carrots are littered throughout the street. The carrots give you a speed boost, hitting barrels slow you down. I hit a lot of barrels. A lot. But I caught up to the Masked Gentleman just the same; or, at least, I thought I did. Unfortunately, he seemed to have disappeared, leaving only a flitting piece of cloth where he once was flying. 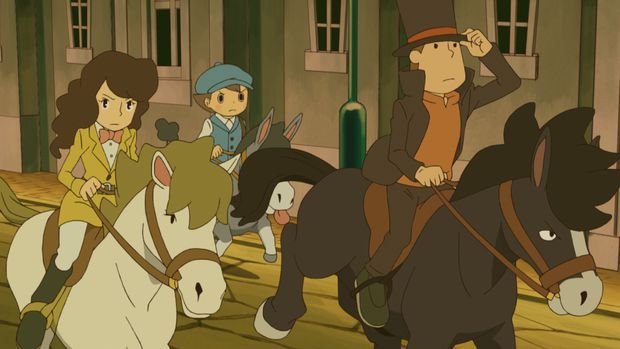 After this point, the only things Layton and associates can do is give the scene of arrival a good once-over and things become more familiar. While the Layton series’ gameplay is a bit well worn after a quartet of DS games, its 3DS outing has received a pretty noticeable overhaul. Investigating areas now involves dragging a magnifying glass around the scene; points of interest cause it to light up and a quick tap brings you in for a closer look. The scenes you’re investigating are also a little less static and a bit bigger, presumably thanks to the 3DS’ beefed up tech.

The characters are also rendered polygonal for the first time in the series, animated sprightly, giving them a more lively quality in conversation. While I preferred the 2D cutscenes with the 3DS’ 3D turned off, it looks quite nice in these new 3D sequences and in investigation.

Of course, I’d be remiss to fail to mention the puzzles for which the series is famous. I only tried out a few in my hands-on time, but they were as interesting and varied as ever. The first tasked me with extricating a failed clown from his balloon entanglement — perhaps only a rung under trying to untangle Christmas lights — while another deductive word puzzle required me to find a lost girl’s mother after they were separated in magical commotion. 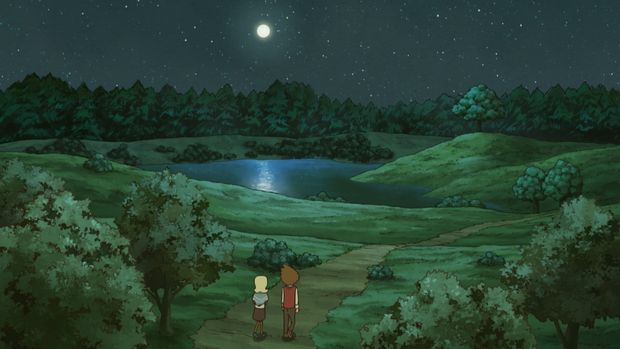 Another puzzle had Emmy piecing together a toy robot; doing so successfully made the shopkeeper who challenged her even more enamored with her, so he gave it to Emmy as a gift, which opened up its own puzzle minigame, accessed from the professor’s bag. You have to navigate the robot through a series of obstacles — enemy wind-up mice, walls, conveyor-belt floors — while being restricted to movement three spaces at a time in one direction. The game hinted at a prize for completing all the stages, though I found it rather fun to play with for its own sake.

We may have had to wait a long time for localization of this text- and dialogue-heavy title, but, as ever, Professor Layton and the Miracle Mask seems worth it. I’m suitably intrigued by the promise of unearthing Layton’s early years (and what grim secrets they may contain), but even more intriguing is the mystical, magical Masked Gentleman; he’s a fly dresser and definitely seems like my sort of villain. Also, damn, Miracle Mask is ridiculously gorgeous.