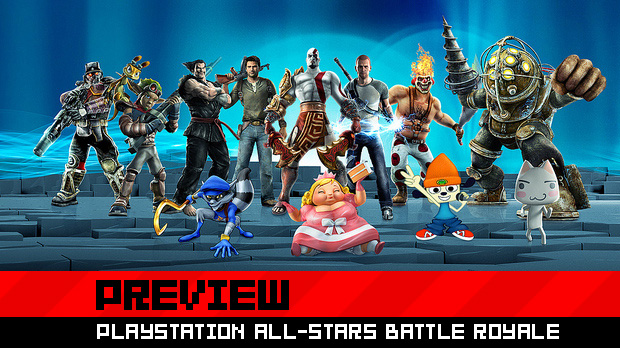 Clone. Ripoff. Copycat. Call it what you want, but PlayStation All-Stars Battle Royale is a game that stands on its own. There have been a couple games that have aped the style of Super Smash Bros. in the past, but none of them attempted to rewrite the rulebook like Sony has with All-Stars.

This is a game that demos incredibly well at preview events. It’s easy to get lost in the novelty of seeing beloved characters on-screen, surrounded by chaos and overwhelming visuals. While the game didn’t play like junk, it was hard to get a sense at E3 of how much depth and replayability the game would have once it hits retail. It also was impossible to find out how good the netcode would be. Now that I got extensive time with the beta (to be released to the public soon), I have the answers I was looking for.

Though we’d all be better off waiting for the final, polished product, I’ve found it incredibly hard to keep away from this beta.

After spending an extensive amount of time getting my ass beat with the beta’s six characters, I have a much better impression of what type of game All-Stars is and how much it deviates from Super Smash Bros.

On the surface, All-Stars is a game where four iconic videogame characters beat the ever-loving crap out of each other in an arena that pays homage to two or more PlayStation games. The main difference between it and other party fighters comes from its scoring system, large character move sets, and lack of ring-outs. Super Smash Bros. is a game based around ring-outs. If a losing opponent doesn’t fall off the map, you hit them until an animation forces them to go flying off into the distance. This element infuriates some players but it wouldn’t be Smash Bros. without it. Without it, however, you have All-Stars. 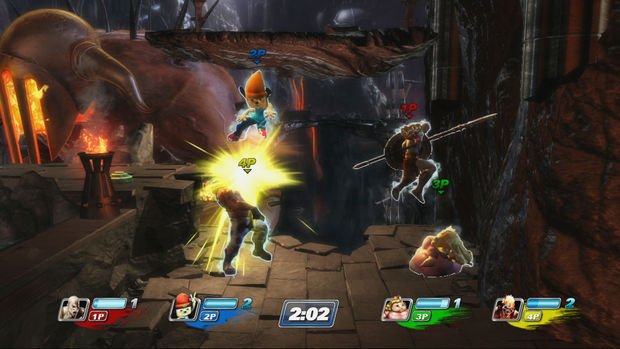 Because of the changes to the Smash Bros. formula, All-Stars is a much more complex and chaotic game (at first). For a concept with such mass appeal, this fighter has one of the steepest learning curves in recent memory, because it requires you to forget everything you know about the genre. Even when you wrap your head around the game’s controls and combat, you’ll need to relearn so much as you go from character to character since they each play differently. You can still jump into a match and have fun mashing buttons, but if you play to win, you’ll want to dedicate some time to learning the game.

Supers take the place of knockouts in All-Stars, making it feel more like a traditional fighting game in some ways. By beating power orbs out of enemies and collecting them within a stage, you’ll be able to pull off three levels of supers with the R2 trigger. It will take sometime to learn your character’s supers since they are all so different. Most level 1 supers are short range, like Fat Princess’s Cake Rush or Kratos’ Blade of Olympus, while other characters have longer-range ones or ones that are limited to defeating a single competitor, such as Sweet Tooth, who slaps a mine to an enemy and kicks them away.

Though All-Stars‘ roster isn’t as full of old, familiar faces as Nintendo’s, SuperBot is doing an awesome job of making every character feel true to their franchise. Perhaps it’s a benefit of these characters being born on more advanced hardware or not being limited to 2D platformers, but All-Stars roster feels much more imaginative and fitting than any Smash Bros. game. Sure, Radec and Kratos are gloomy dudes, but the game strikes a nice balance by including an even number of whimsical mascots like Sly Cooper and Parappa. 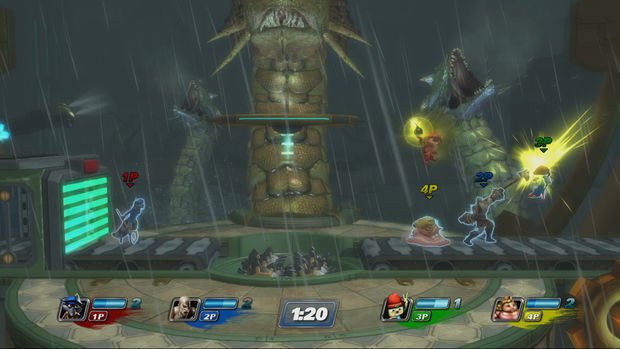 Another improvement over Smash Bros. is the move set which feels much larger and unique. Parappa is slow but a master at Kung Fu. He also knows how to chill out and play some jams, so he’ll throw down a boombox that shoots out power orbs. In contrast, Radec (Killzone) is a long-range powerhouse who can toss grenades, fire various guns, and take cover behind a giant shield. On a vertical level, he is much trickier to control since he isn’t great at close range. Pulling off a well-timed sniper shot with Radec is something I don’t think I’ll grow tired of any time soon.

There is so much depth to managing supers and each character’s large move set that it’s hard to say whether the game is unbalanced or not. After a couple matches of players spamming Radec’s sniper rifle and grenade toss, I was ready to rage quit and call the game broken. Instead, I adopted this cheap playstyle only to be beaten repeatedly by some skillful Parappa players. Though I spent most of my time playing as Fat Princess and Radec, I tried my best to win with at least one match with all six characters. I soon found that what works with one will not always work well with another.

The fan service doesn’t stop there, however, since stages also bring together elements of PlayStation franchises. God of War gets the most love with bosses occupying both the Hades stage and the Rachet and Clank-based Metropolis, but my favorite has to be the bananas LittleBigPlanet stage that quizzes you on gaming trivia (via Buzz! announcer). Each stage has environmental hazards and is constantly shifting, so you can’t camp one spot for long. The beta contains four stages but they aren’t all winners. The Jak and Daxter stage is a small platform surrounded by water that contains aggro piranhas, making for a frustrating time for the slower characters with poor close-range attacks. 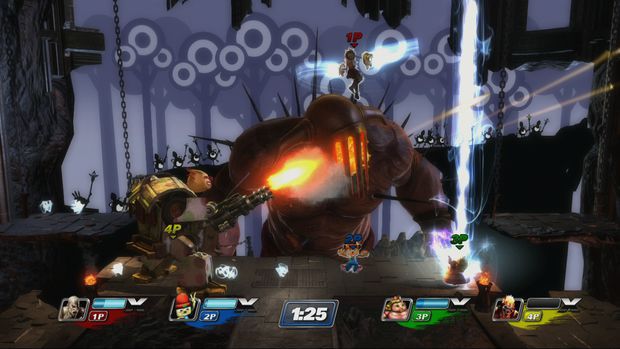 The private beta I spent the last couple days with is a very early, bare build of the game that lacks options of any kind. You can play offline and online but that’s it. The netcode is pretty great, though! I imagine once I can raise player health and extend match time, I’ll enjoy this game even more. The beta also has all sorts of quirks and bugs like all players displaying losing animations and the rare system lockup. Finding a game is quick and automated but I often had a rough time finding people to play with — I assume this will change as more people join the beta in the fall.

The beta has me more concerned with balance and blocking. Some specials just feel ridiculous like Radec’s level 2 Plasma Canon that wipes out all players facing it, even when you jump above it. Then there is Fat Princess’ Cake Rush, which makes the game a CAKE WALK (!). Blocking for all characters that have the ability — Sly Cooper actually goes invisible instead — feels really laggy and useless as a result. Since blocking is a quintessential feature for any fighting game, it makes this beta feel incomplete in a big way. I hope the delayed block is something that will be addressed in the future.

My biggest complaint about All-Stars is one that is tied to the core of what this game is. Unlike Smash Bros., all players are always in it to win it since there is no life count. There is also no way of knowing what the score is during a match. Because of these things, the tension that comes from a close match is completely absent from All-Stars (at least in this beta). It feels like a lot of random death and then someone is named the winner. 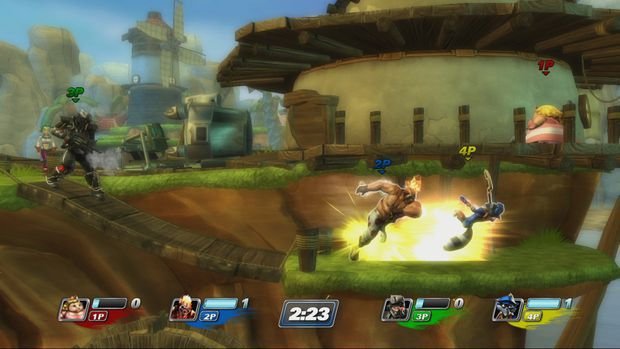 Despite these misgivings, bugs, and repeatedly getting my ass kicked, I couldn’t stop playing All-Stars. Even when I knew I had enough material to write about, I just kept playing and playing. It reminds me of the days as a kid when I’d get a game demo and just play it to death, telling myself I should just wait for the full thing instead of spoiling myself.

If All-Stars shipped as-is with a full roster and stage selection included, it’d still be worth picking up. But, if SuperBot manage to polish the game, add on more modes/options, and balance each character, this has the makings for a new fighting game classic that may remind you of a certain game but I can assure you that it doesn’t play anything like it.

If Sony wanted a Smash clone, they have failed. Because what they have is something much more, unique and special with PlayStation All-Stars Battle Royale.