Crysis 3 has been in development for the last 14 months and is set to be “one of the most ambitious games that Crytek has ever done,” according to Crytek’s Director of Creative Development, Rasmus Hoejengaard. He went on to even describe the latest entry as “the pinnacle of the Crysis franchise.”

That’s a pretty big claim, but it’s hard to see Rasmus’ big picture as our time with the game was extremely short. Still, Crytek did show off some cool new features that has me interested in the new direction Crysis is heading.

You are Prophet, who was in the first Crysis and also in Crysis 2 where he *SPOILER ALERT* killed himself so his Nanosuit would be able to adapt to the main protagonist of Crysis 2, Alcatraz. Then some weird things happen, and somehow Prophet and Alcatraz’s minds get merged, with Prophet coming out as the dominate force. It’s kind of weird, but Rasmus promised it’d be explained further in Crysis 3.

Anyway, it’s 20 years after the events of Crysis 2, yet Earth is still in the middle of an invasion by an alien race called Ceph. They want planet’s resources, and humans out of the picture. Then you have CELL, a private military corporation that wants the advanced technology of Ceph, and your Nanosuit. 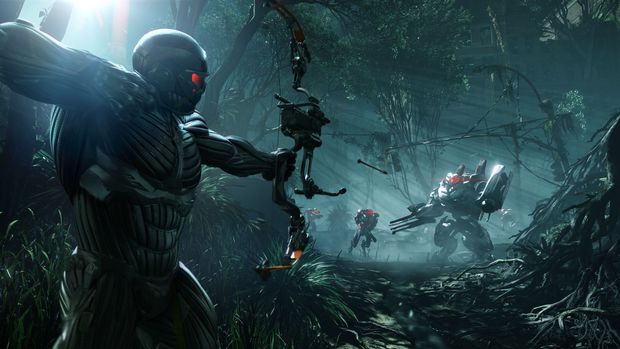 It’s up to Prophet to stop Ceph’s plans, and to put an end to CELL’s operations. Saving the planet is a big priority for our hero, but he also wants to get revenge for what happened to him and his men. Prophet is taking charge in this story, becoming the hunter as opposed to the hunted like in the prior games.

You’re also going back to New York, but it’s nothing like you remember it thanks to CELL. They’ve built a giant Nanodome around many major cities in order to contain whatever Ceph forces remain. The Nanodome actually doubles as a super greenhouse too, hyper-accelerating plant growth in order to cleanse the environmental damage caused by Ceph. It only took 20 years for what would have taken 100 years for all the plant life to grow and take over New York, turning it into a quite literal urban jungle. Pretty nice of CELL, but you can be sure they have some nefarious intentions here.

The area we saw was based in Chinatown, which had basically been transformed into a swamp. There will be seven distinct environments in all, such as grasslands, canyons and more. The word “sandbox” was thrown around a few times, but we never got a chance to see with our own eyes if we’re truly getting a sandbox environment again. It’s hard to say for sure, especially as we were only shown about ten minutes of hands-off linear focused gameplay in the swampy Chinatown. 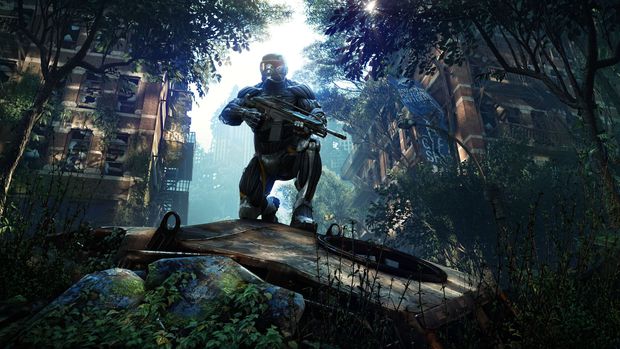 There will be, however, some freedom when it comes to every combat situation. Rasmus referred to it as “AAA: Assess, Adapt and Attack.” You’re going to find yourself with a vantage point in most cases, allowing you to decide whether you should go in loud or take the stealth approach.

The biggest aid to the stealth gameplay now will be your bow and arrow, Crysis 3’s new signature weapon. It’s a stark contrast to the super badass soldier that you are, but it is pretty damn cool nonetheless. The big deal here is that you can remain cloaked whenever firing the standard arrow, a first for Crysis. Swapping to any of the other type of arrows — like the explosive tip — will kick you out of cloak mode however.

CELL also has some news toys at their disposal, like the prototype Typhoon assault rifle that shoots 500 rounds per second. It sounds cool in theory, but I thought it was funny how it took about half a clip from the Typhoon to kill an alien while the bow and arrow was a one-hit kill type deal. 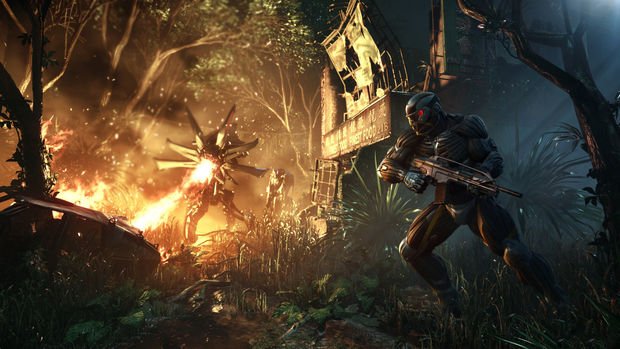 Lastly on the gun front is the ability to pick up and use Ceph weapons. These weapons are normally DNA locked (Rasmus likened it to the weapons from the movie District 9) but since your Nanosuit is now a hybrid of human and Ceph DNA, you’re able to take the alien weapons for yourself. The only Ceph gun we saw was called the Heavy Mortar that launched plasma grenades and missiles. Ceph guns aren’t reloadable so you’ll have to discard them once spent.

Of course the star of all the Crysis games is your Nanosuit, and you’ll still be able to utilize the increased strength, cloaking, and speed powers as usual. The newest addition to the suit is the ability to hack electronic objects. Crytek wants to keep the hacking pretty simple, and it looks like you just have to wait for a status bar to fill to take command of something like a sentry turret.

That pretty much covers all the bases for all the new key stuff revealed for Crysis 3 so far. Our taste was very small, so it’s hard to judge all the new elements in a real gameplay sense. It looked like more of the same, but that’s not necessarily a bad thing. It also looked gorgeous, but that goes without saying whenever you talk about a Crytek game. I did really enjoyed the fusion of a lush jungle environment over a ravaged New York City. It’s kind of like the best of both worlds from Crysis and Crysis 2 in a way.

I definitely need to get some more time with Crysis 3, and it looks like we’ll be getting that come E3 this year. Until then I do have good news for you PC folks! Crytek intends on releasing versions of the game optimal for everyone, including high-end computer rigs on day one. Very good news, especially since no one wants a repeat of what happened with Crysis 2 in this case.