There’s a scene in the second chapter of Gears of War 3 in which Cole Train has a flashback to his time as a professional thrashball player before becoming a COG soldier. When I saw it the first time, I noticed that it would’ve been more effective if the player had ever seen the planet — say, in Gears 1 — before it was ravaged by the Locust. Without a frame of reference, it seems a little shallow.

It also reminded me of Pat Tillman, though — the Arizona Cardinals safety who, after 9/11, joined the Army Rangers and was deployed to Afghanistan where he was ultimately killed by friendly fire.

Gears 3’s most recent DLC addresses both of those things. If — and I’m not convinced, but if — we can read into Cole’s past and see that Gears of War contains elements of the 9/11 story, then “RAAM’s Shadow” is about 9/12. 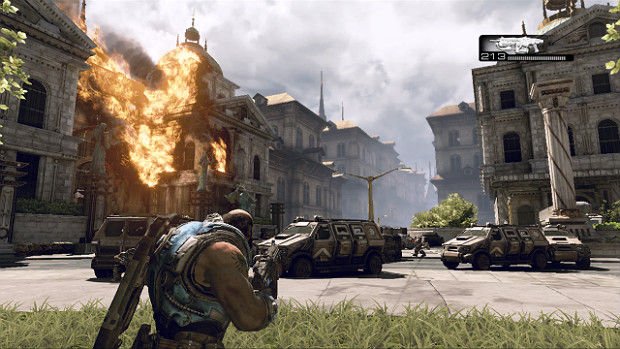 The two-chapter preview build of “Shadow” I played is about watching Sera break down, about the fear and the doubt that creep into a society in the aftermath of large-scale trauma. It’s a prequel campaign that happens “shortly after Emergence Day,” in the shadow of the most devastating event in Gears history.

Giving players a look at the immediate results of E-day overwhelmingly works in the game’s favor, but it’s also the source of a few plotholes: for soldiers that saw their first Locust drone a few hours ago, Michael Barrick and Minh Young Kim have a pretty sophisticated knowledge of Locust tactics and culture.

Still, framing “Shadow” as a prequel reaps generous benefits. For one, dramatic irony is at a premium here: knowing, for example, who lives and who dies in the later games gives “Shadow” a level of gravitas that far outstrips what little of the content’s actual narrative I’ve seen so far. Even divorced from the larger story, “Shadow” is ominous in its own way — each chapter counts down to some other cataclysm called the “Kryllstorm,” and the game’s uncertainty slowly morphs into fatalism. 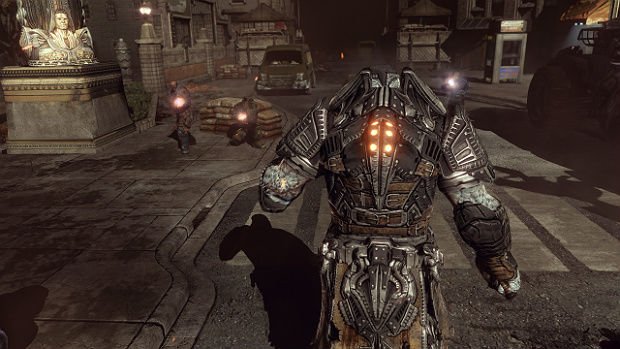 When we first saw Sera in 2006, it was already scarred, pockmarked, pitted, desolated, and barren. It was Earth-like, but utterly alien. “Shadow” takes us back to a time when the planet’s social institutions still seem in tact, when human enterprise is still recognizable.

Despite its title “RAAM’s Shadow” is (so far) bright and colorful, each Gear’s armor is bright, burnished and smooth, and Ilima consists of beautiful sun-stained, Haussmann-esque boulevards and stately, pillared buildings. Gears’ visual design has always focused on the juxtaposition of Sera’s soaring architecture and apocalyptic devastation, but “Shadow” is tinged with the knowledge of how the before becomes the after. Gears of War: Detroit.

There’s a great fight near the end of the two-chapter, hour-long preview — Scorcher-wielding Locust burst into the vault of a bank, setting gold bars and stacks of money on fire, and Zeta squad-member Tai Kaliso mentions that “monetary wealth is fleeting.” What sounds like a mystic bullshit platitude only makes sense if you’re curb-stomping someone: money doesn’t mean very much when the world is ending before your eyes.

The bank scene acts as a harbinger of what we know will happen in Sera — governments break down, social institutions fall apart, and previously entrenched authorities will eventually fail. Emergence Day changes everything. 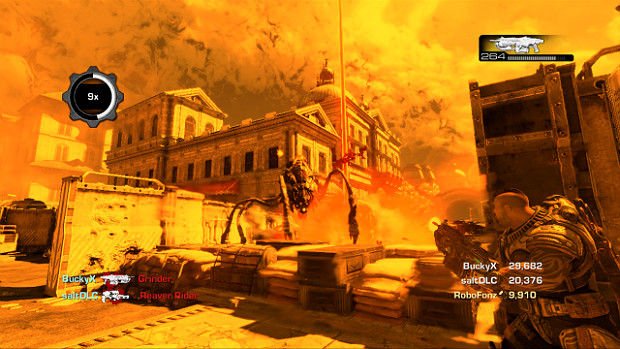 In the same way that the death of Osama Bin Laden only makes sense to people who remember what it was like to not live in perpetual wartime, Cole’s flashback is effective now that I can more easily imagine what Ilima’s thrashball stadium might have looked like, now that I’ve seen a handful of Ilima residents that might have cheered for the Hanover Cougars.

The early portions of “Shadow” teeter on the edge of exploring how devastating — structurally and psychologically — events like E-day might be. But it’s all ancillary to the shooting, the active reloading, the stabbing, the cussing. It’s just on the outskirts of the Gears experience, seen in the visual design more than the dialog or writing, and just out of reach.

Dom probably forgets about his dead wife and kids when there’s a sub-human monster bearing down on him with a chainsaw-gun; and we seem to have slipped into a state of casual xenophobia and despair and political idiocy since we’re all too busy trying to find jobs and pay mortgages.

I only played the first two chapters of “Shadow” to write this preview, but I’m tempted to say that — in a flash — it illuminates the entire Gears thesis. It might be dumb and loud and brash, but I think Gears of War has always wanted to examine what a degenerative process war can be, though that desire has always been subjugated in favor of the game’s mechanics. In that case, not only is “RAAM’s Shadow” a natural starting point for the Gears trilogy, it might be the only one.

“RAAM’s Shadow” will be available on the Xbox Live Marketplace on December 13 for 1200 Microsoft Points.