I have a bit of a sordid history with the Fable franchise. Despite the now-infamous promises it never delivered on, I absolutely adored the first Fable, as what was delivered was a finely crafted game, and one of my favorite RPG titles of all time.

When it returned with 2008’s Fable II, though, I wept for the series. The single-button combat system, abrupt story, and often numbing lack of difficulty were changes that I simply couldn’t swallow. Over time, I grew to live with these changes, just in time for Fable III which, while not stellar, proved to be a solid entry.

And now we have Fable: The Journey, a title with a lot to prove, as it’s been taking heat since its first showing at E3 2011. While the early criticisms that called it on-rails were not off, my recent session with Fable: The Journey showed that it can still be enjoyable. That is, when the controls actually work. 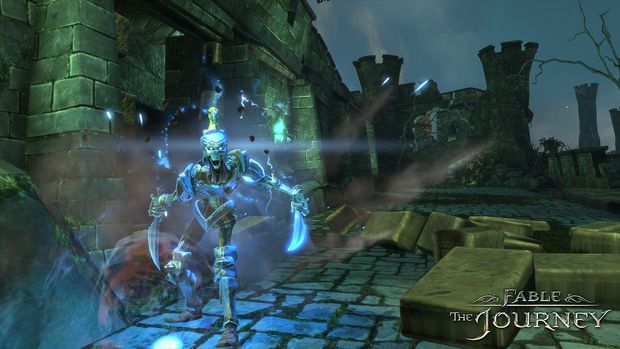 Taking place 50 years after the last game, Fable: The Journey follows the story of Gabriel, a clumsy screw-up from the wandering Dweller tribe. After falling behind from the rest of the convoy, he finds himself hopelessly separated from the group. While trying to find his way back to tribe, Gabriel runs across series staple Theresa, who’s fleeing from a mysterious and evil corruption.

They escape, but not without scars to Gabriel’s trusty steed, prompting him to strike a deal with Theresa. His assistance against the corruption, in exchange for his horse’s life. The story here seems to be your standard Fable fare, the unassuming hero cast forward by unforeseen circumstances into a greater destiny. It’s standard RPG fare for that matter, but it keeps in well with what the Fable series does, and works here. 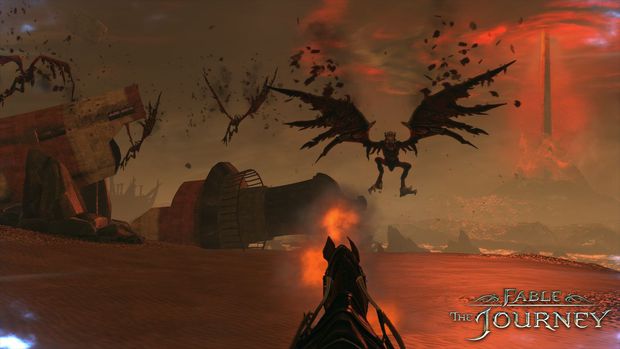 Once in-game, the first thing we try out is the horse riding, which actually worked pretty well. The whole system basically boils down to you imagining that you have real reigns in your hand. To make your horse go, you simply hold your arms out front and crack forward as if cracking a real reign. To travel more quickly, you simply crack down again. If you want to slow down, you bring you arms up to your chest, mimicking the motion of pulling in the reigns. Steering from left to right is similarly straightforward.

To go right, just pull your right arm in towards yourself, while extending the left, and vice versa to go in the opposite direction. Again, a pretty straightforward system, and a pretty reliable one too. With a few exceptions, Kinect read my steering motions well enough, with the only notable ones cropping up randomly. You can also rest your arms when not steering left or right, which is a nice touch. As well as the steering portions of game worked, combat was a whole other story.

Eschewing the past entries’ combat trio of might, skill, and will, combat in Journey is all magic-based. With a gauntlet system similar to what was in Fable III, players can tie one spell to each hand, firing a maximum of two at a time. Spells in Journey run the gamut of many of the series’ staples, so expect to see Shock, Flames, and Force among others.

Spells can also be upgraded of course for more damage and added effects. One such effect was a handy little ability called Aftertouch, which allows you redirect the course of a spell you just fired. Unfortunately, the combat portions  are where Journey seemed to break down. 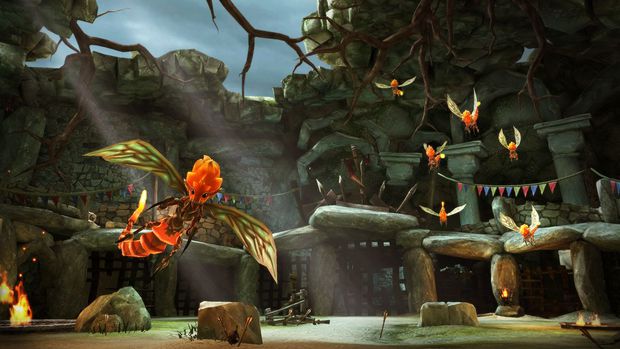 To cast a spell you, presumably, push the hand that has that spell equipped in a straight, forward motion. Half the challenge of the combat for me though was getting Kinect to read these motion. It got particularly annoying in sections that asked me to aim and hit a specific area target on-screen, as actually making the mark proved an exercise in patience and luck.

At one point, it was almost a literal exercise, with more than a few moments of sore shoulders as I kept repeating the same motion. It wasn’t all broken, however. When the system worked, it played decently enough. However, towards the end of my time with Journey, I had honestly given up on even trying to be accurate with shots, and instead sent spells out wherever, only to use Aftertouch to try and properly direct them. Honestly, Aftertouch was half the reason I ever actually hit anything.

When I had come to the end of my time with Fable: The Journey, I found myself left with the oddest feeling. I was impressed with the overall responsiveness and smoothness of the driving sequences, but combat left plenty to be desired. There are other things to do outside of the main story, such as the wave-based, score-attack Arcade Mode, but without an all around solid core, I just don’t see much to get excited about.