After winning indiePub’s third annual Independent Game Developer Competition in 2010, Hitbox Team has been hard at work on making their acrobatic-janitorial platformer dream a reality. They gave the indie gaming masses a taste of what Dustforce had to offer in a prototype, the same one that netted them the $100,000 grand prize from Zoo Games. Now a year and a little bit later, Hitbox Team is finally ready to publish Dustforce and release it to the world on January 17, 2012.

For those of you not up on your indie games, Dustforce is a action platforming title that consists of cleaning as much as you can from various surfaces and enemies as quickly as you can, all the while looking damn good in the process. It benefits greatly from its unique visual style and intricate musical score, along with its stylized animations.

I got a chance to play an early version of the game, just a week away from its launch on Steam.

After loading up the game, you’re introduced to Dustforce’s central hub. From here you can roam around, looking for levels to enter or, like me, you can spend 10 minutes just exploring this area. The hub seamlessly blends each of Dustforce’s environment types into one large world that you can interact with, complete with a day and night cycle. At first, I was exploring a forest that led into a cavern system at midday. When I was finished down there and found an exit, I was on the other side of the hub, near a mansion at dusk. One of Dustforce’s most interesting features is the clean visual style that extends through all levels. From the characters and enemies to the environment elements and backgrounds, everything helps make this world seem so full of life.

Levels are presented as doors the player can enter, and the first door you are greeted with is the tutorial level. Hitbox Team decided to give its tutorial room a different visual style; it has a very Tron or VR-like feel to it. Characters and objects are comprised of one primary color and the obstacles you face shatter into triangles, as if they were built with polygons. The colors themselves are eye-catching and with a subdued background, it really helps the characters and obstacles in your way pop out. 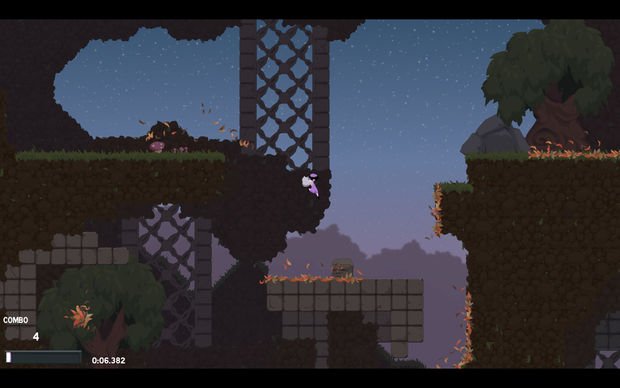 One of the new features added was an Area Attack maneuver that allows players to clear a screen of filth once their Combo gauge is full; the added bonus being that any pesky enemy types caught in the vicinity will be swept away as well. The Area Attack has all the flash and flair of a DragonBall Z fight scene, which may sound dull to some but growing up on the stuff, I found it a welcome addition to a game based on fast and flowing action. The end result is a wonderful showcase of all of your enemies meeting their squeaky-clean fate in glorious slow motion, so that you can best take in your handy work.

It should also be noted that health is not an issue in Dustforce, as your character can take as many hits as they like. The only catch is that if they do get hit or fall into a spiky insta-death section, your Combo counter gets reset back to zero which will affect your overall Finesse ranking. 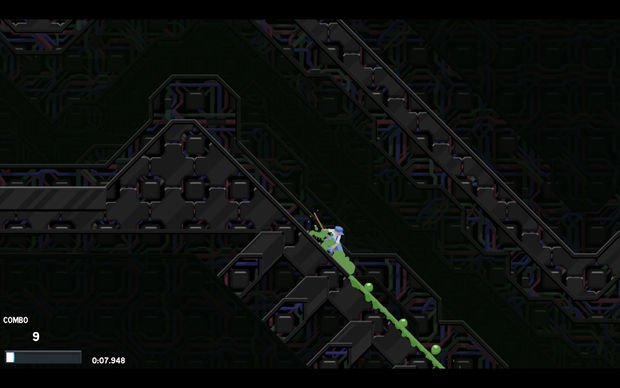 Once a level is completed, a player is ranked from S to D on how well they cleaned up the level and how stylishly they performed. Finesse ranks players on how well they were able to keep a combo going while still moving the through the level and avoiding any damage or pitfalls. On top of that, this summary popup also shows you the top players on the Leaderboards, giving you the chance to see how your parkour abilities fair against other players around the world in Cleanliness, Finesse, and Time. Another nice touch is the ability to view the replays of players on the Leaderboards, allowing players to pick up some tips from other high-level competitors. You can also view and save your own replay to share with friends or to challenge rivals.

The levels themselves offer a wide variety of challenges. You have your standard platforming obstacle course levels, where players compete to get to the best score and with the best time while dealing with all the dangers the levels have to offer. These levels tend to be more about keeping the player flowing and moving gracefully from one section to the next. Watching some of the replays of the top leaderboard holders on these levels can be mesmerizing. It’s like watching a high-level Ikaruga player blaze through the game without losing a life or a Super Meat Boy player complete a level in less than five seconds. 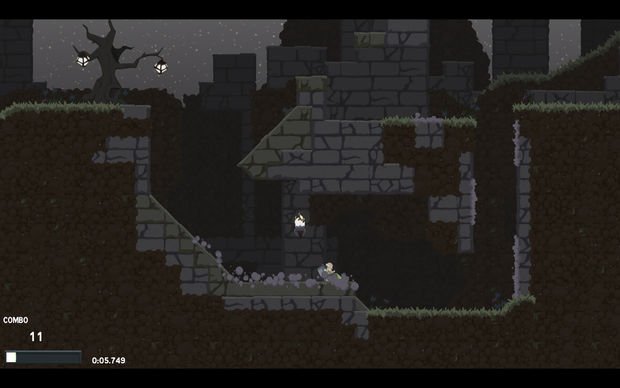 There are a fair bit of these platforming levels that give the player a moderate challenge, but they are not so difficult as to make you want to give up. In this respect, Dustforce reminded me a lot of Super Meat Boy. There were sections in Super Meat Boy that really seemed to test my patience; I just kept on messing up and dying. But it wasn’t because I didn’t know what to do — it was because I wasn’t executing the correct moves with the correct timing.

Dustforce’s level design helps to teach the player that in order to reach certain segments or platforms you need to use all of the tools in your arsenal and figure out when to use them. I enjoy these kinds of platformers, where the difficulty is not in trying to deal with unresponsive controls or with poorly designed levels, but in figuring out the precise movement and timing of each character action in order for you to reach that next platform. Make no mistake though, if you are looking for a platforming challenge, Dustforce includes some very difficult levels for you to test your mastery of your cleaner.

The game features four characters to choose from, with each nameless Sanitation Engineer represented by a different color. You have your all-around Blue janitor with a standard broom, a Red female janitor with a push broom, a pint-sized Purple janitor duel-wielding dusters and a grizzled janitorial veteran, garbed in Green and wearing a wet/dry vacuum on his back. All of the characters controlled mostly the same from what I played; the Purple janitor was a bit more agile and the Green janitor felt cumbersome to control, in comparison to the Blue or Red janitors. Despite those quirks, all of the characters can make their ways through any of the levels, so in the end it comes down to personal preference. Personally, I like both the color blue and brooms, so it was no contest. 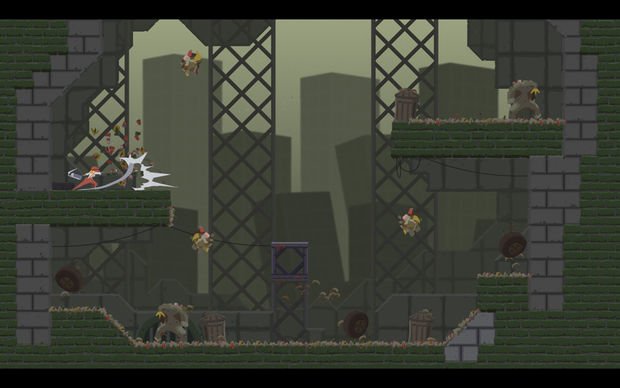 Along with these platforming levels, Dustforce also offers up enemy challenge levels. These offer a much different style of play from the platforming; instead of just running through the level to sweep up as much as you can as quickly, these levels force you to slow down, take your time, and deal with each of the enemies in order to knock off as much dirt as possible so as to keep your score and combo up, which will increase your Finesse ranking. These levels also like to challenge you to face various enemy types at once. Sometimes, you’ll need to deal with large hulking bruisers that take multiple hits to take down while avoiding the attacks of shield-carry enemies that can only be damaged from behind. These levels tend to be smaller in size, but the challenge of taking on so many enemies while not getting hit is enjoyable and gives a nice break from all of the aforementioned platforming.

The ambient sounds also help to give this world a sense of depth. When you enter forest sections, you can hear the birds calling out to each other while your character sweeps from jump to jump, with the crackling and crunching sound of leafs under your shoes. In factory sections, you can hear the dangerous sparking and arcing of exposed electricity, warning you of the danger ahead. The music really helps to focus you on the task at hand and fits the themes of each world fantastically. In the warehouse and lab sections, the music takes on a more synthetic or mechanical feel, as opposed to the ethereal and lighter tracks the follow you through the woodland and mountain areas. 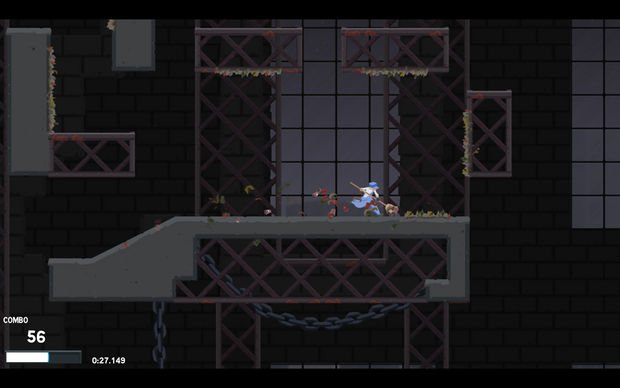 For what I have seen and played, Dustforce has a good chance of becoming another instant indie platforming classic. I did run into my own little bit of technical issues in my preview build — some sporadic crashing and intro video issues — but that didn’t detract from how fun the game was to play.

I probably put more time into exploring the hub world or the levels for hidden corners than I did trying to beat my previous ranking or time. Its visual style and music give Dustforce a feeling all its own, and in the sea of indie platformers today, that really helps it to stand out. If you’re into platformeing games, Dustforce is for you.