Dungeons are typically optional areas in videogames where players can explore for treasures, and fight against all sorts of danger. Usually you think of titles such as Zelda, The Elder Scrolls, and any number of role-playing games when dungeons are brought up, right? So imagine my surprise when Steve Papoutsis, Executive Producer on Dead Space 3, let me go hands-on with their take on a dungeon recently.

You’ll come across multiple dungeons throughout Dead Space 3’s story, full of goodies that will add more to the overall experience, and satisfy OCD completionists. These dungeons are also completely optional, so you can blow right past them if you’re looking to get straight through the overall story. 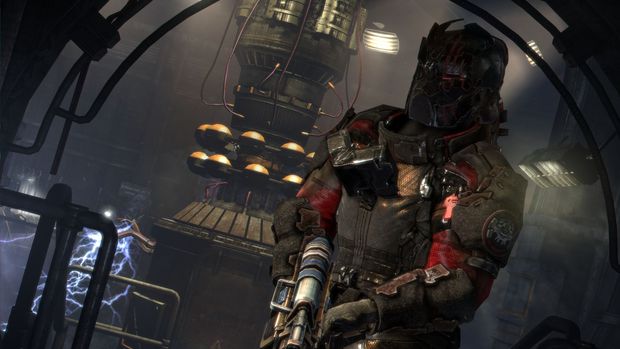 The particular dungeon I went through was called the Lost Flotilla, and takes place in the first act of Dead Space 3. This optional section is set aboard a spaceship within a ship graveyard above the ice planet Tau Volantis. The demo was restricted within the spaceship, but we were able to get a quick peek at the surrounding space. There were ships and debris all over the place, and you’ll be able to traverse the environment through Zero G exploration.

Dungeons will typically average from 30 to 60 minutes in length, and will be filled with items, ammo, treasures, additional story content, and of course, plenty of monstrous Necromorphs. Steve Papoutsis told me that the purpose of the dungeons is to “create a deeper experience for people.” The traditional gameplay is still there, but now players are “able to go and explore off the beaten track and actually have areas like this that will provide extra opportunities for loot, more backstory, more logs, and things like that. So really, it extends the experience for those people that really kind are those hunter gatherers that want to collect everything.” 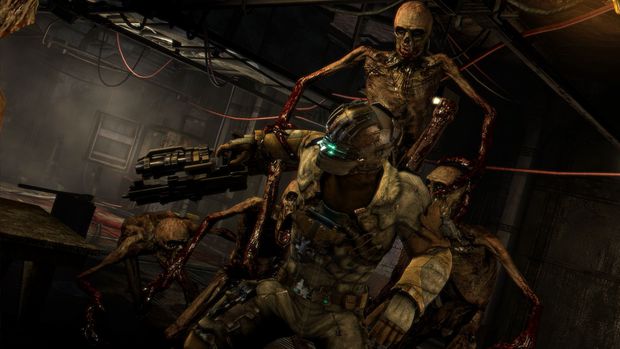 Like the main game itself, you’ll be able to explore these areas by yourself or do it with a buddy through the drop in/out co-op. In fact, there will be some dungeons only available when you’re playing co-op as it relates more to Carver, the second playable character’s backstory.

Of course, as this is a Dead Space game, you have to fix something that’s broken down. The Lost Flotilla is running low on power, so you have to find a way to get the ship powered up. Because of this, part of the level sees you manually opening doors with telekinesis to spin the locking mechanism on each door. Simple puzzles are around too, and one section required me to flip several switches on a circuit breaker in order to progress.

Visceral also gave us a taste of the weapon crafting system, which allows you to merge weapons together. In this case, I was wielding a Line Gun with its alt fire being the Ripper chainsaw gun. A great combo, especially as I rarely use the Ripper on its own normally. You’ll be able to craft different weapon combos through the new weapon crafting workbench, and more details on that will be coming next month. 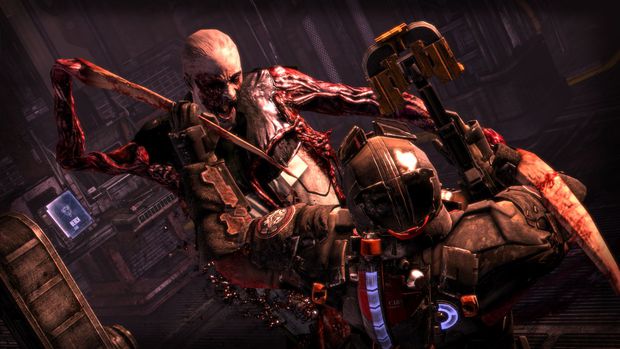 The spaceship had that tight corridor feel going on, with the usual Necromorph attacks happening from any number of directions.  Because of that, I never felt the need to use the new roll or crouch feature. I think those abilities will be better used for the big boss fights, or the new human soldiers you’ll be running into.

My time with Dead Space 3 was far too short, and the setting for the demo wasn’t the most idle when it comes to properly judging a survival horror title. While the section I played certainly had that Dead Space feel you’re used to, I can’t really state much more beyond that. I definitely need to get some proper hands-on time with the co-op, and some of the more outdoor environments to truly see how much Visceral is shaking up the series.

At the very least, I love that dungeons are being added to the game. I typically replay Dead Space games three times over for the story, and because I want to upgrade Isaac and his weapons to full power. Dead Space 3‘s new dungeons are definitely another incentive to continue that habit.