Dynamic weather hazards, TrueSight, and now a progressive leveling system are the three pillars Relic is building Company of Heroes 2 on.

While we’ve talked at length about these first two elements, the leveling system is what caught my eye the most on this third go around, taking more than a few cues from the Call of Duty series. 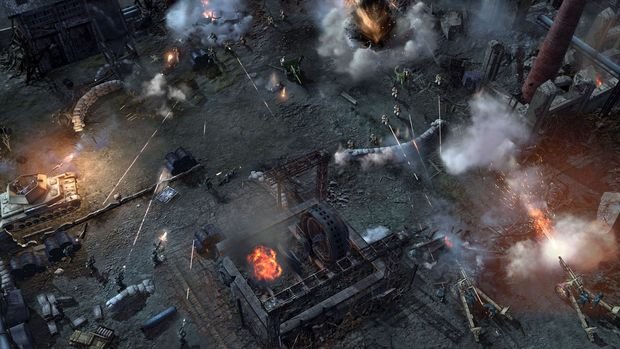 One thing Hamza and Jordan didn’t get to see was a build of the game running on DirectX 11. In our past previews, Company of Heroes 2 looked nice in DX9, but DX11 just adds all those little wrinkles to make the game pop.

The persistent snow tracks have added depth, dimpling, and take a more natural shape. The snow itself looks more like individual pieces forming a larger whole rather than a static white sheet. You can see particles burning and moving in the smoke, and river water flows and reacts dynamically to infantry, vehicles, and the wind. While the official specs have yet to be released, Relic has said that the Essence 3.0 engine is being optimized to be less tasking than the first CoH.

If you’re familiar with our coverage of the single-player combat, you should have a good idea of what’s on offer here. TrueSight is the name of the game in CoH 2. As it is, the real-time strategy standard is to block off enemy units’ visibility until your own come into close proximity. TrueSight is essentially a more real-world interpretation of this, a feature that limits your own visibility to what your units would be able to see.

When taken with the game’s cover system, things start to get interesting. While your infantry might triumphantly waltz in to capture an enemy fuel plant, you can easily be caught of guard by a nearby mortar team hidden in shrubbery. Despite being slower-paced than some other RTS games, this approach to visibility does a great job of keeping you on your toes. 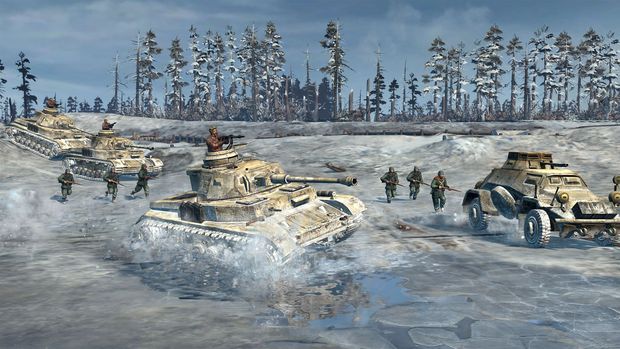 One of the more touted additions to Company of Heroes 2 is the weather’s effect on gameplay, and the same holds true in multiplayer. Like TrueSight, the weather hazards go a long way to forcing you to stay adaptable. Some units are slowed down by heavy snow, visibility is reduced, and infantry will even freeze to death if you don’t take care to get them to a campfire every so often. The weather proves itself to be more than a gimmick, punishing players (like me) who initially refuse to respect the hazards. Not much longer after the snow storm kicked in, my infantry fell to the brutal cold, leaving the enemy anti-tank units unchallenged to decimate my armor.

Outside of battle, the upgrade system offers a great deal of flexibility, taking a good amount of inspiration from the Call of Duty franchise. The most significant part of your loadout is perhaps your commanders. With seven to choose from on each faction (possibly more via post-lauch support), you can select up to three per loadout.

Commanders offer their own unique buffs, structures, and units. You won’t have the resources to call them in until midway through the match though, and even then, once you pick a commander to go with, you’re stuck with him for the duration. For this reason patience is advised as you want to get a feel for which commander is going to help you the most. Wait too long though, and you can expect to get a swift kick from your enemy’s commander units. I usually stuck with my offensive commander, allowing me to call in specialized mortar units to round out my tank-heavy army.

You can also deck out your loadout with intel bulletins, which essentially act as perks. Based on real WWII-era documents given to soldiers that detailed how to deal with certain types of opposing forces, intel bulletins offer minor, passive buffs to your army. These include damage boosters, faster access to your commander, etc. You can only select three per loadout, however — I found that you have to get a read on your opponents play style to make the most of them. Since my opponent favored heavy armor, I slapped on a 10 percent tank damage boost to buff my anti-tank infantry. I still got my ass kicked, but I like to think the bulletin helped me go down swinging. 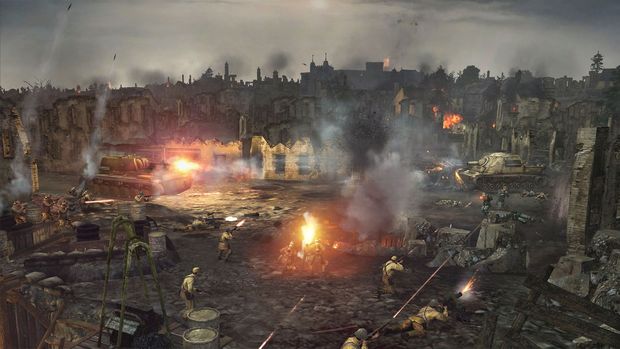 All this is unlocked via a traditional progressive upgrade system. You play matches, earn experience points, and gain more customization options as you rank up. You can even earn XP in single-player, but on a curve similar to what we saw in Halo: Reach. So don’t expect to rank up quickly by playing the same exact mission over and over.

The system even comes with a prestige mode, called Battle Honors, that allows you to reset back to level one in exchange for better emblems. Achieving battle honors does net you more than just emblems, such as intel bulletins that can only be unlocked after a certain battle honor ranked has been reached.

While all strategy titles are, by definition, a thinking man’s game, Company of Heroes 2‘s slower pace does a great job of tasking the ‘ol noggin, while the TrueSight system and weather hazards preserve a great deal of the reflexes and split-second decision making of faster RTS titles. It still remains to be seen how well all the new additions work in multiplayer with other teammates (all my matches were 1v1 skirmishes), so be on the lookout for the early 2013 beta. Until then, stand firm and ready — the Motherland calls, comrades.