Yesterday at EA’s Final Hours event, I had a chance to check out a nice slice of Battlefield 3‘s single-player campaign on the PlayStation 3. After putting in some hours with the multiplayer beta at home, I was a little concerned about how the graphics in the console iterations would translate as compared to the jaw-droppingly beautiful vistas of the PC version.

Fortunately, my playthrough put most of my fears to rest related to the console ports of what was genuinely designed as a PC graphical spectacle. In every gameplay mode I played, whether in the campaign or the varied multiplayer modes, I felt both excited at what had been accomplished on the console side of things, and at times even surprised at what awesome graphical tricks the new Frostbite 2.0 engine brings to the table.

However, if I were to base my opinions of Battlefield 3 solely on the single-player campaign and what I witnessed of it, I’d honestly find it difficult to blindly speak positives without the nagging voice in my head reminding me about some of the issues I had. 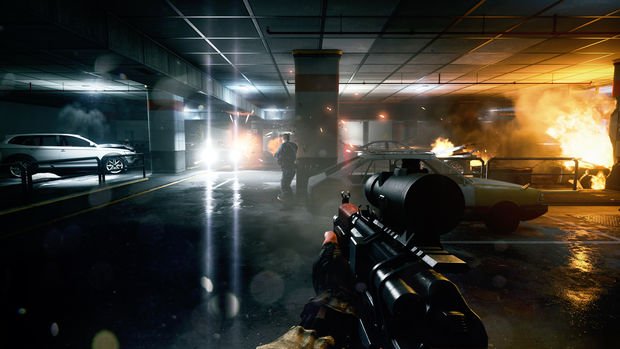 Though I can’t reveal much, Battlefield 3 starts with a considerable bang. It’s immediately visceral and exciting. I appreciated the game’s opening and was stunned by how realistic many of the character animations consistently were throughout the game and how much you may do a double take at times because characters often move and look incredibly lifelike.

After this, the action comes in waves. In a few of the first gameplay trailers, you may remember the scenes of your soldier fighting at the street levels of Iran and eventually making his way to the top of a building to launch off a rocket at the adjacent building before heading back down again to the streets.  This all takes place during one of the earliest missions — “Operation Sword Breaker” — and it is nearly as graphically beautiful and exciting on the PS3 as the initial PC trailers made it seem.

When you’re being surrounded by enemies on all of the building fronts around you, the sound of bullets grazing the vehicles you’re hiding behind is something to experience, and just as visceral is the excitement and anxiety of going prone to crawl across a rooftop while avoiding incredibly dangerous sniper fire. The Frostbite 2.0 engine is all about immersing you in the feeling that you are actually there and witnessing the chaos that is taking place. This comes out in myriad ways, whether through the beautiful lighting system that uses all kinds of interesting tricks, the immediacy of realistically crumbling buildings and ruined facades around you, or in the directional sound effects that demand either a set of headphones or a kicking surround system (if you don’t have neighbors living below you.) 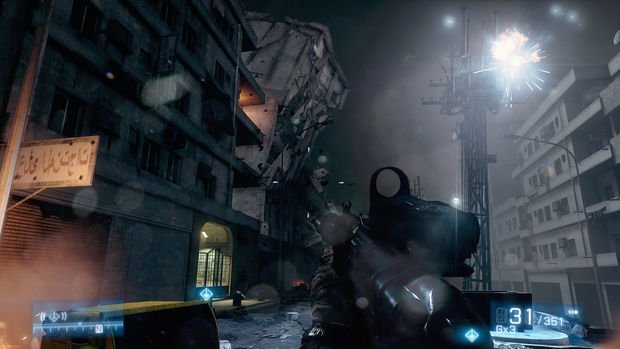 Unfortunately, every rose has its thorn and soon after this comes a realization that a fair bit of the single-player campaign in Battlefield 3 seems to be taking its cues from too many other modern shooters that have come before it. You see, while your movement in the game is incredibly fluid with your ease of vaulting over rails and stone walls — it’s still somehow not fluid enough to avoid the age-old quick-time event trap every now and again.

Granted, this is still early on in the campaign but even so, at this early stage I was hoping this sort of thing was a matter of providing training wheels that would soon come off. As I played through more of the campaign, the training wheels remained on and I found myself playing a game at times that felt a lot like certain shooters that appeal to an entirely different crowd.

The nagging thought in my head during these occasions — such as the moment you’re instructed to defuse a bomb and so you follow a wire to the detonation control box that leads to some quick-time button pressing — is that this sort of thing has been done to death. Yeah, the graphics are undeniably beautiful but as a gamer I really don’t like getting the control taken away from me.

Where the series has always shined is in its combat scenarios and the fact that they don’t rely on a consistent need to keep moving up, but on a need to stick to cover and pay attention to where the enemy is headed next. Battlefield 3 doesn’t disappoint in this regard. 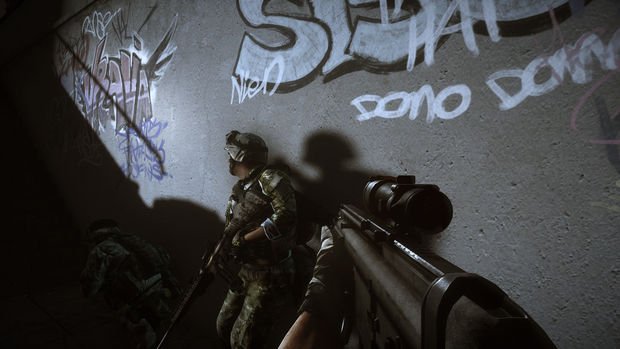 At the end of “Operation Sword Breaker,” you’re shooting enemies in a .50 cal mounted on the back of a truck when a huge earthquake rips through the city and you watch as a building comes crashing down right atop you. After a cut scene gives some back story behind your character, Lieutenant Blackburn, and his involvement in fighting a force called the PLR, you begin your next mission “Uprising” amidst the rubble of a ruined city during the dark hours of the morning. This level is all about pitting you alone against squads of dangerous enemies still lurking around, and the varied firefights you have are both intense and incredibly engaging.

I actually got stuck at a point in this level because I was rushing into action instead of finding a good strategy to take down a number of opponents who would be on high alert if they knew of my presence. The new lighting system and how it works with flashlights came into play here, both with spotting out enemies as they did their searches to making sure to stay out of their light, and with sometimes being purposefully blinded by an enemy who would sneak up to your character and then flash you with a blinding light before stabbing you to death. Flashlights, flares, and fires (oh boy, alliteration!) all do their part to show off the lighting effects rather well, as well as various sources of ambient lighting that help create an oppressive atmosphere with dusty, utterly destroyed plazas and hazy dark skies.

The last mission I played before getting back to “Operation Guillotine” both excited and disappointed me. In the mission, “Going Hunting,” you begin on an aircraft carrier way out in the ocean, getting prepared to take off in a jet. DICE really set the scene here, as you can hear the rain all around and the ocean looks beautiful as it churns in the stormy weather. I was equally impressed at the moment that you put on an air force helmet and the sound of the rain becomes somehow both muted and even more pronounced, as it pelts off your helmet and gives you a real sense of being within the game. 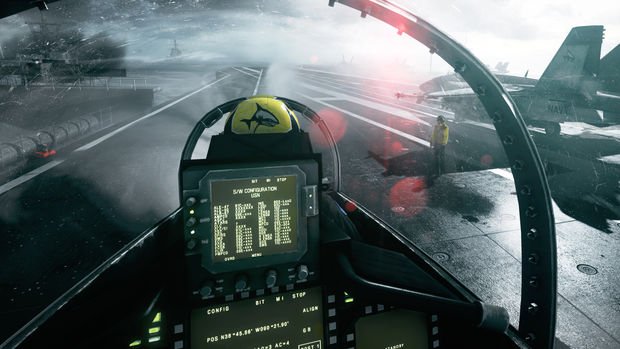 However, in this mission you soon come to realize that you are not the main pilot. After going through procedural checks before launching off, you are designated as the lookout who paints the targets and sends out flares to avoid getting hit by jets flanking you. You’re given total freedom to look around while you’re in the jet and this is of course necessary as you need to be the one to protect the jet with missiles and flares while your partner is flying it, but at no point in the mission do you take any sort of control of the jet itself. Instead, you sort of feel like you’re on a roller coaster ride, throwing pennies in all directions while the ride takes you on designated rails. While this can be quite a blast to just take in the scenery, with all of the graphical sheen and just plain awesomeness of being in a jet (which trumps being on a boat) — it feels a little stale by the end of the mission, even with varied gameplay thrown in that involves familiar infrared satellite views and painting of targets to completely obliterate them.

I love the Battlefield series and I almost feel like writing up this preview is a moot point because I’ve always been a fan of every single one of the series on consoles primarily because of the excellent multiplayer modes. The single player-campaign has never really been anything to write home about. While I can’t yet completely dismiss the Battlefield 3 campaign for what it’s trying to do (I’ll leave that up to the reviewer’s final say, after all), I have to express my doubt about the core gameplay conceits behind it. I have dedicated hours to Battlefield games like Bad Company 2 and 1943 primarily because they offer something completely different than other modern shooters on the market.

To see the single-player in my beloved series go down a well-travelled route that I don’t want to follow by repeatedly taking the action away from me to follow a storyline that may or may not be a better one on offer than other franchises makes me a little apprehensive. I love good stories in games, but I also love being able to actually play the game instead of being restricted in any way.

Stay tuned for my previews of the multiplayer and co-op modes. They sincerely — and completely — blew me away and brought my excitement to frenzied levels for Battlefield 3.