By now, most of us know about the long and challenging path that Remedy traveled in order to see the fruition of the original Alan Wake. Spanning five years of development, the psychological action thriller was not only one of 2010’s best titles, but it helped invigorate a seemingly dying genre.

What made Alan Wake such a compelling experience was Remedy’s creative story-telling prowess. For all intent and purposes, they delivered a narrative that merged the best parts of Stephen King, Lost, and Twin Peaks into a sleek videogame package. But while the atmosphere was some of the most memorable of this generation, the game’s clunky combat left much to be desired. 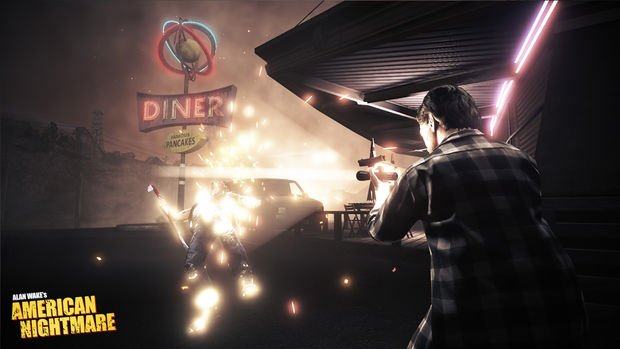 If the original Alan Wake was the perfect accumulation of the psychological thriller, American Nightmare hopes to do the same for fans of pulp-action. Inspired by the likes of Quentin Tarantino and films such as From Dusk Till Dawn, Alan Wake’s latest decent into madness turns the action up to eleven while still maintaining  Remedy’s penchant for atmospheric storytelling.

Taking place in the Arizona desert town of Night Springs, fans of Alan Wake might remember its name from the Twilight Zone-esque program that could be watched throughout the original. See early in Wake’s career, that talented author lent his skills to writing a few of the show’s episodes. And now, not only does Wake find himself trapped in this strange town, but also reliving the events of his past work. 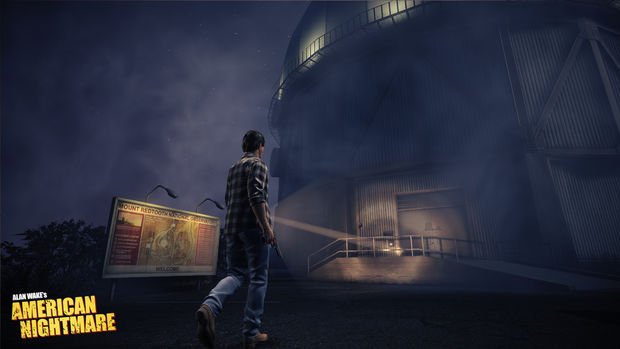 To make matters even worse, Wake’s evil doppelganger (called Mr. Scratch) is tormenting him, leaving behind video messages, while on the hunt for his wife Alice. Similar to the first game, these videos are portrayed with live actors — capturing that Sega CD era FMV vibe. The only scene I witnessed was expertly done and strangely enough, made the supernatural serial killer extremely likable. Hopefully, there are a good amount of these scene in American Nightmare, as they are by far the highlight of the narrative.

American Nightmare’s story has all the fixings — from the limited amount I was shown — to satisfy the staunchest of fans. My only complaint with the delivery of the story was in the somewhat stiff character performance that took place between Wake and the woman seen below. Similar to the first Mass Effect, each character just stood in place, fairly motionless, as they talked to each other about all the strange occurrences going on. I’m optimistic if this will be addressed, but thankfully everything else, especially the combat, is animated beautifully. 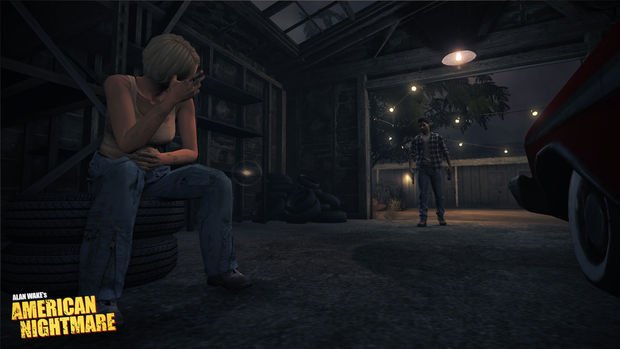 Speaking of the combat, the action in American Nightmare is faster, more frantic, and even more intense than its predecessor. The compelling light versus dark mechanic is back, but has been greatly improved upon to hopefully attract a wider range of players. New exotic weapon types, wilder enemies — with even more aggressive behaviors — and a more dynamic and destructible world help create a thrilling pulp-action environment.

My favorite of the new weapons, by far, is the nail gun. Similar to an SMG, it quickly rips through foes and offers a decent amount of “rounds” per clip. With more sinister enemy types — such as ones that continue to split into smaller and faster beings — having a weapon that can spray a lot of ammo rapidly comes in quite handy when things get hectic. For the more careful shot, there is also the crossbow which hurts enemies even without the aid of light. It’s slow to reload, but packs one mean punch. 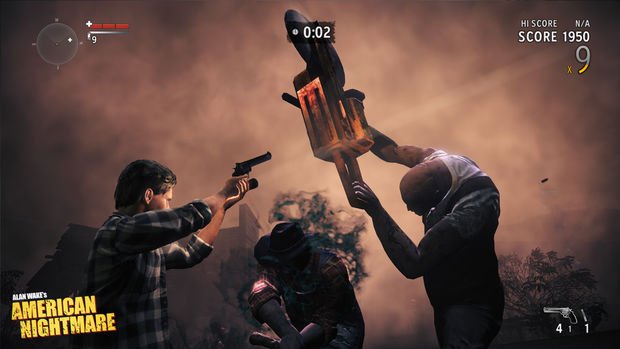 While the eyes-on demo I witnessed was clearly built to showcase the games improved combat, there’s still a balance created for fans of the original. For starters, the folks at Remedy made it clear that there is plenty of optional story content — extra dialog amongst NPCs, manuscript pages, and radio programs — for those looking to connect the dots to Wake’s endeavors in Bright Falls. Music, as well, also still plays a big part in American Nightmare, with licensed tracks — like Kasabian’s Club Foot — supporting some of the game’s most suspenseful moments.

Perhaps the biggest addition to American Nightmare and the one that makes it much more suited for the XBLA experience, is the game’s “Fight Till Dawn” mode. Similar to Gears of War’s Horde Mode, this arcade-action fest has Wake fighting waves of enemies, with limited resources, hoping to survive 10 minutes to make it safely into dawn. It’s not just surviving though that’s important, as setting a high score, on  the modes leader boards is ultimately the task at hand. 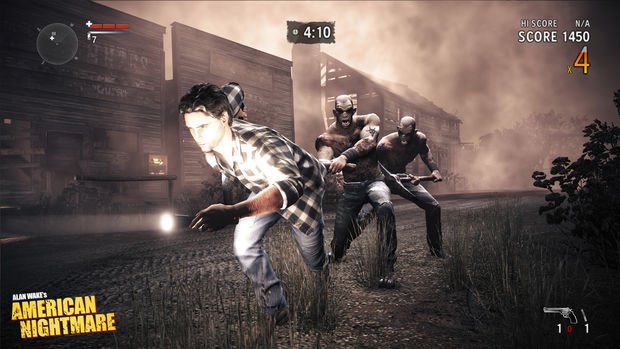 I was able to go hands-on with the game’s cemetery map — one of five available maps at launch — during my preview. Similar to the story mode, this map exuded a great sense of fear throughout. With the difficulty of each wave building as the time wound down, managing resources while fending off each attacking horde proved as stressful as challenging. While not scary per se, this mode still was just as nerve racking as I remember some of the most tense parts of the original Alan Wake. In the end, I made it through to dawn, but my cowardly skills were highlighted by my measly two-star rating.

Remedy promised tons of unlockable rewards for Fight Till Dawn mode and they hadn’t ruled out the possibility for more maps in the future. But for those who find the five maps easy, there is also a Nightmare mode that, while not shown, should give even the most diehard action gamer a run for their money.

It’s kind of funny, when American Nightmare was first created it actually started off strictly as an arcade action game, Remedy told me. They had this new world of weapons and of monsters with a greatly enhanced combat mechanic, but no real setting to call home. Thankfully, the rich idea of Night Springs fit perfectly into place. As excited as I am to blast enemies away in Fight Till Dawn mode, an Alan Wake experience is just not complete without a story to completely mess with my head. Hopefully, the wait isn’t too long this time around,as I think that just might make my head explode,