Reboots are nothing new to the videogame industry. This, arguably, common place occurrence seemed to take a turn for the weird when Take-Two announced the re-imaging of the PC strategy title X-Com into a first-person shooter.

Maybe switching genres as part of the reboot process is here to stay, as EA is following suit with their upcoming title Syndicate, a reboot of the classic PC strategy title. Keeping in line with the conventions of the modern FPS, developer Starbreeze Studios is adding a co-op mission mode which we recently got a chance to check out. 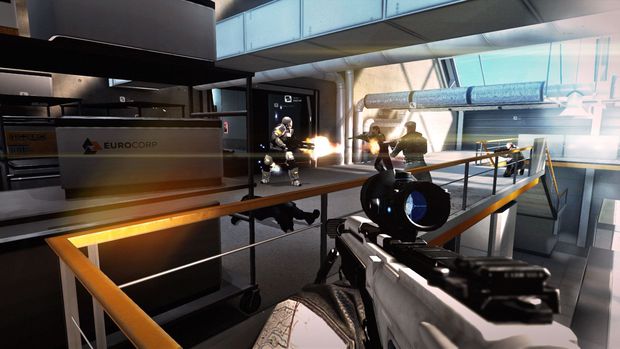 The world of Syndicate is a dystopian future set in the year 2069. Corporations have become extremely powerful, and essentially rule as a governing body through mercenary-like gangs called Syndicates. In co-op, players are cast as a member from an up and coming syndicate with their eyes set on taking down the largest syndicate in the world, Eurocorp.

Syndicate’s four-player co-op is its own campaign and runs on a mission structure similar to that of Spec-Ops mode from Call of Duty. What separates Syndicate a bit from the pack is the breach hacking mechanics. Through a chip in each person brain, humans in the world of Syndicate perform everyday tasks such as banking, making calls, and other activities without the need of any device. As a syndicate member employed by powerful corporations, you and your crew sport high end militarized chips that allow you to heal each other, whittle down enemy armor, and hack an enemy’s mind to make them fight with you or kill themselves. 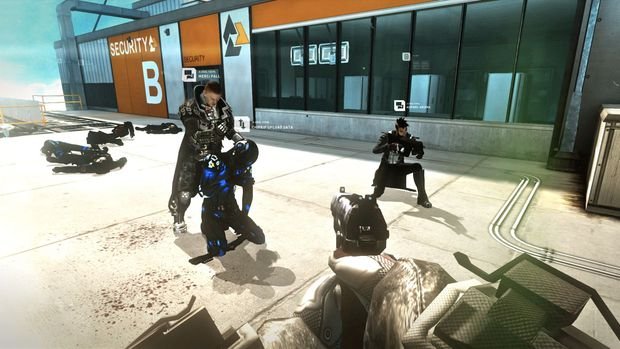 You have different types of breaching options, all of which are specific to the different type of character classes you can use. There is the standard breach where you hold down the Left Bumper on the Xbox 360 controller to heal a teammate or sabotage an enemy. There is also a virus breach that allows you to infect enemy turrets and equipment. The final breach type I used was the force breach that acts just like the standard breach except it doesn’t require you to hold down the left bumper but the success rate varies.

During missions, players will run and gun through increasingly difficult enemies as they go through each level, creating a high level of dependence on each other. Lone gunning is not a viable option. I really like cooperative modes that force teamwork through dependence, but in my time with Syndicate I often felt like the difficulty was more cheap than challenging.

In the beginning of the mission we played there was a good amount of enemies, forcing us to constantly heal one another. Very quickly though, we ran into enemies with absurdly large amounts of health. To take down these heavies we needed to breach their armor to whittle it down. But getting in close enough to breach put me in dangerously close range of their shotguns, not to mention that you can’t shoot back while breaching. Adding to the frustration was the painfully long breach times and the fact that you have to breach past multiple layers of armor. I’m all for a challenge, and a challenge it was, but it more often felt like an unfair handicap. 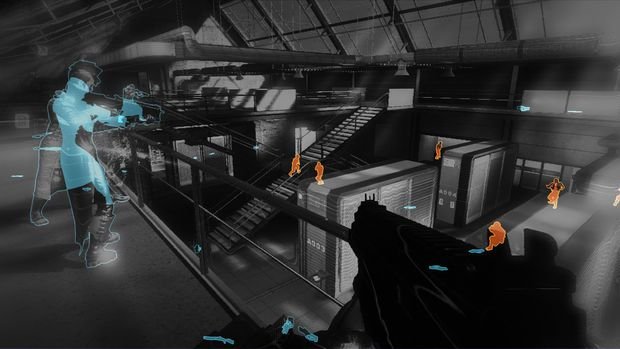 Apart from breaching, there are more passive tools to help you combat the odds, specifically your Dart overlay. Like Detective mode from Rocksteady’s  Batman games, Dart in Syndicate lets you see past walls and highlights enemies for you. Its usage is limited by a gauge that depletes when activated, but it does refill fairly quickly.

I enjoyed some of my time with Syndicate’s co-op. Cheap deaths aside, I found myself really getting into the game once I got into the swing of breaching, healing, hacking turrets and flanking enemies with the help of Dart. Syndicate doesn’t stray far from the formula established by past co-op survival/mission modes, and it works well enough here. On the flip side of that coin, the design shows signs of laziness.

Dependence on your allies on only exists because health is relatively finite, and enemies have vast amounts of it. Breaching a heavily armored opponent is a cool idea, but why do I have to be so close to him? Throw in the needlessly long breach times, and a rinse repeat feel to take down one enemy and its clear Syndacite needs work. Of course this demo was about half a mission and we have yet to see how the class customization comes into play. Still, my hopes are sadly curbed with how the game is shaping up so far.