Has anyone ever wondered that Nintendo�s home consoles come in pairs? 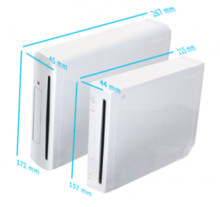 Wii and Wii U as a pair

Now which bring me to the Wii. There have been motion gaming before the Wii but, it was the first videogame console to make motion gaming as the forefront of the console. The Wii is probably the console mostly responsible for grabbing people who weren�t gamers before into gaming. With the success of the Wii but, not exclusively because of Wii, the gaming industry is becoming more of a mainstream form of entertainment. But maybe because of the Wii, gamers created an unspoken civil war between casual and hardcore gamers, which I�m not going to get into. With this problem arising Nintendo is trying to address the issues that hardcore gamers have. I don�t know much about Wii U at this point, but I think what Nintendo is trying to do is to keep the audience that they have attracted with the Wii(so called casual audience) at the same time they are trying call out to hardcore gamers and let them know that Nintendo can play with the big boys. Thus Wii U is the suppose solution for Nintendo. It is suppose to be an enhancement to the Wii in every way. The Wii U is suppose to be taking everything that makes the Wii what it is now and takes it to a new level.

As I said before I think it�s too obvious to be a coincidence that Nintendo produce a pair of consoles that share the same concept. Then again, it could be me, depending on how many people agrees with me. Just putting my thought out there, so what is anyone�s input on this?
Login to vote this up!