[RetRose Tinted is a feature I have been running in the Destructoid Community Blogs since February. Its purpose is to re-evaluate games that have had an impact on my gaming life and discern if they hold up to modern scrutiny. I am very proud to be bringing this feature to the front page of Destructoid]

My father plays videogames but he isn’t what I’d call a “gamer.” Rather than check out new releases or expand his horizons into games that he might have missed, he finds one title that he likes and then plays it until the program is so outdated that modern hardware won’t run it without my intervention. He’s been playing Warcraft II every day since he first saw it in 1996.

At least he enjoys a quality game, right? That’s what I was thinking about when I decided on this week’s retro offering. Prior to discovering the RTS genre, my dad was positively addicted to an arcade-style game called Pengo. While he claimed that he kept that 286 on his desk well into the mid-nineties because of an old dot matrix that he printed labels with, the only thing I ever saw him do with it was play that game.

Pengo isn’t exactly a popular classic, certainly not on the level of other coin-ops like Pac-Man, Donkey Kong or even Dig-Dug. Still, I watched a man play it several times daily during the course of a decade. There has to be something to that, right? Hit the jump and follow as I try to find out. 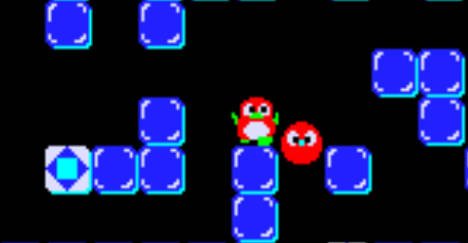 In Pengo, you are an adorable penguin who mercilessly slaughters equally cute “Sno-Bees.” I don’t know what the hell a “Sno-Bee” actually is, but they appear to be bouncing blobs with beaks and eyes which move around a maze of ice blocks.

Pengo can push the blocks of the maze and they’ll travel until hitting another block or the wall. This is Pengo’s preferred method of killing Sno-Bees: crushing them between blocks of ice. Pushing a block into an immediately adjacent block or wall will shatter it. In addition, pushing directly against a wall (instead of a block) will cause it to shake violently and stun any Sno-Bees that happen to be alongside it. When stunned, Sno-Bees can be killed by walking over them.

Sno-Bees chew (peck?) their way through blocks and kill Pengo by touching him. Often when attempting to stun them, they have a nasty tendency to be en route to killing you and, if they were already on the way to your space, you’re already dead. There also seems to be no rhyme or reason to their movement. For example, there might be one chasing you, but it’ll suddenly turn and chew its way through a block that wouldn’t give it any better access to your position. Other times, they won’t even bother moving from the corner of the stage they start in for a long time. 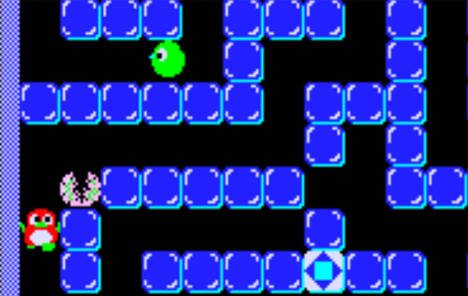 Each round has a certain number of Sno-Bees which have to be eliminated in order to advance. Killing a Sno-Bee will cause a new one to hatch from an egg hidden in an ice block. You can stop this from happening by getting to the blocks the eggs hide in (displayed to you briefly at the beginning of each round or when a new egg opens) and breaking the block open. Killing the unborn, just as in reality, is the easiest way to ensure a long and happy life for yourself.

Pengo is an arcade game, so the entire allure lies in beating high scores. To its credit, the game really does an excellent job of providing different ways to rack up points. Killing Sno-Bees, obviously, is a good way to score but the different methods of doing so result in different point values. Crushing multiple Sno-Bees with a single block has the most points potential, while stepping on buzzed bees will net you a paltry sum. Bonus points are awarded at the end of every stage, the amount varying by how long you spent finishing the level. 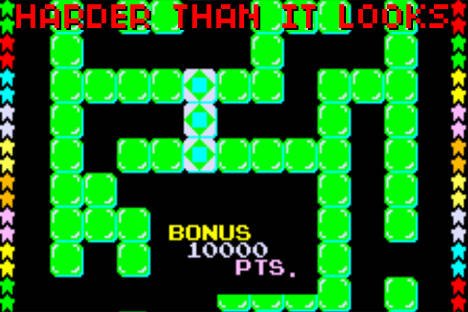 In addition, every level features three unbreakable blocks with a diamond on them. If you manage to connect these blocks in a line, you’ll score a massive bonus and stun every Sno-Bee in the level. Typically, the blocks will be positioned in the most inconvenient manner possible to achieve this without dying from the roving enemies.

It’s a weird little game and my perception of it didn’t seem to have changed much over the years to when I picked it back up. The game can be pretty frustrating when you get trapped for the thirtieth time due to the random nature of enemy movement. Once I’d gone through about a dozen rounds, I started to understand some of the intricacies involved. Strategy plays almost as considerable a part as reflexes do and planning your approach to a level in the seconds you have before it begins can be pretty intense. I began to enjoy the game when I began to grasp it. 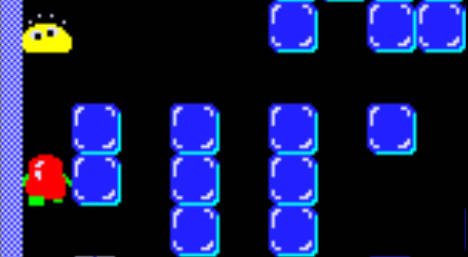 With all of that said, Pengo only has seventeen stages that run in a loop. Actually managing to play all of them would be impressive (I only ever made it to the seventh) but I think it’s safe to say if you’ve seen one level of Pengo you’ve pretty much seen them all anyway. There will be variety in terms of where eggs are hiding and the placement of the diamond blocks and you’ll probably never play a level the same way twice.

There’s a reason why my best score of 53,930 points would qualify me for the 20th position on Twin Galaxies for this game (had I the foresight to record it). Pengo is fun for a while but you’ll eventually grow tired of the seemingly schizophrenic Sno-Bees. It’s too deep in its mechanics to be enjoyed by all and too random for the hardcore score-snatcher.