Drugs are bad and there’s no time in the popular history of drug use when drugs were worse than in the 1980’s. Nancy Reagan was encouraging us all to, “Just Say No,” while her husband was preparing to launch the White House Office of National Drug Control Policy, giving us our very first Drug Czar.

Meanwhile, Williams was hard at work on a game that would present a more direct approach in the “War on Drugs”. NARC hit the arcades in 1988 and was one of the first games to use the digitized graphics that would later help propel the popularity of Mortal Kombat. The graphic violence in NARC drew considerable fire from parents and critics, as enemies could be exploded and their flaming, dismembered appendages would fly in all directions.

NARC may be in no small way responsible for the modern vilification of videogames. It reminds me of a simpler time, when every kid was in danger of becoming a murderous junkie instead of a crazed killer trained on videogames. I played it a bit in arcades but my real memories all come from the NES port because, well, there simply wasn’t anything else quite like it on the system. Hit the jump and see if the game was worth all the flak it received. 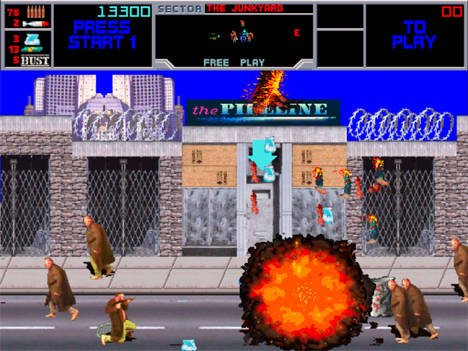 In NARC, you play as Max Force or Hit Man, two narcotics enforcement officers whose mission it is to clean up the streets and take down a drug kingpin, Mr. Big. It’s a side-scrolling shooter with swarms of enemies that can be taken down either with your automatic machine gun or rocket launcher. The game has six stages, ranging from the streets to drug labs and Mr. Big’s penthouse fortress, and can be played with a friend cooperatively.

As you move your character through these mean streets, you’ll encounter all manner of drug-related stereotypes and kill them. Peddlers armed with shotguns are the most common resistance you’ll meet, and I don’t just mean in terms of their frequency. Everything else in the game is an exaggeration or just outright goofy. 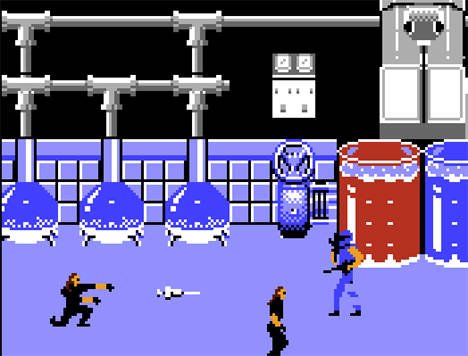 Drug chemists attack you by throwing huge, hypodermic needles that make your character flash like the technicolor perspective of an acid trip. Crack addicts, so high that they’re completely immune to pain, will take all the ammo you can dish out at them and only bounce off-screen when hit by missiles. A rapist clown, named “Kinky Pinky”, chases you with a knife. In a way, I’m not sure if the designers were making fun of drug users or the perception of drug users.

In addition to mowing enemies down, it is also possible to arrest many of them. By moving in close, they’ll go through a painfully slow process of being handcuffed and then fly up to your score, “BUSTED” printed across their backs. Arresting enemies scores more points than killing them but killed enemies may also drop baggies of drugs or cash to help pad out the difference.

As I stated before, most of my experience with NARC comes from its 1990 port to the Nintendo Entertainment System. Released by Acclaim, it’s one of the most accurate ports of an arcade game from that time period I think I’ve ever played in terms of content. All of the levels and enemies made the transition more or less intact, minus a couple of minor requests from Nintendo. 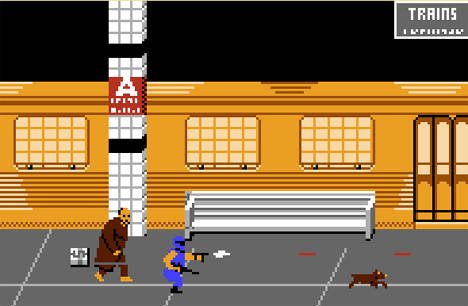 Of course, it’s going to suffer in comparison to its arcade progenitor on the basis of graphics and sound. What they managed to do with what they had is pretty impressive, though. Sequences between levels in which you are introduced to new enemies compare very favorably and characters in-game have a decent amount of animation to them.

Where it comes up a bit short is in the gameplay. The arcade cabinet featured four buttons for shooting your gun, shooting your rocket launcher, jumping and crouching. Due to the NES controller only having half that many buttons, jumping and firing rockets were implemented by tapping the button quickly. It’s a solution but one that can be pretty frustrating when in the heat of battle and unable to get a rocket to fire because you’ve held the button down too long.

The difficulty level of the port is also an issue. The game itself may not actually be any more challenging than it was in the arcades, control issues aside. In the arcade, however, you could continue your game by plopping in another quarter. NARC for the NES has no apparent continue system and forces you to begin the game from the very beginning every time. 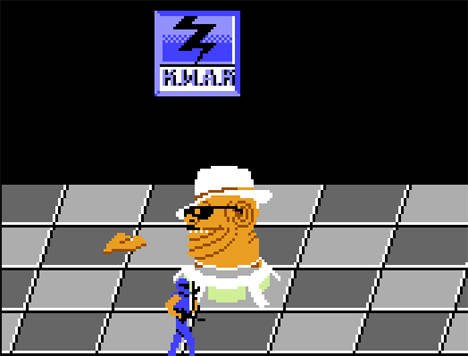 The violence level of this game is absolutely ridiculous, there’s no argument there, and I can see why parents made such a fuss about it.  The key word in that sentence, though, is “ridiculous”. The whole premise of two cops wearing motorcycle helmets and taking down an army of pushers and addicts is completely silly and it’s laughable that something like this could cause controversy.

Laughter is really the only reason to play NARC. The act of playing the game becomes fairly dull after a few minutes because, apart from one level where you can get into a car (then crash it immediately and have to walk anyway) and the absurd boss sequence at the end, it never changes. The game is the same from the moment you start until the moment you quit and the monotony of it will ensure that the latter comes quickly.

Still, it has a rapist clown. That has to count for something.