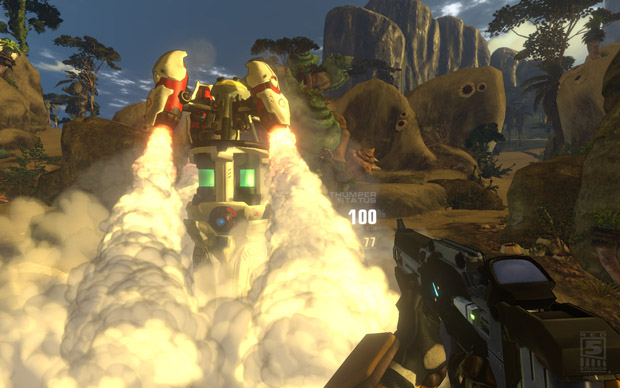 Red 5 Studios announced today a new team-based shooter, FireFall, due to be released some time in 2011. And it has bugs. Nasty, disgusting bugs. I can only assume that they must all die.

The game is being developed by a team made up of designers from the Tribes series and the lead designer of World of Warcraft. Quite appropriately, the game is a mixture of the design philosophies of these two series: take a dude shooting stuff and toss him online shooting at stuff with a ton of other people. While the game is being described as a massively multiplayer game, it will not carry a monthly subscription, instead relying on in-game transactions to keep it going.

There’s a hell of a lot going on in that gameplay video: resource gathering, jetpacking, and even some air travel. If all of this is done right, this could be a damn fine 2011 release. I never could get into the Tribes games, but I’m all in for FireFall.