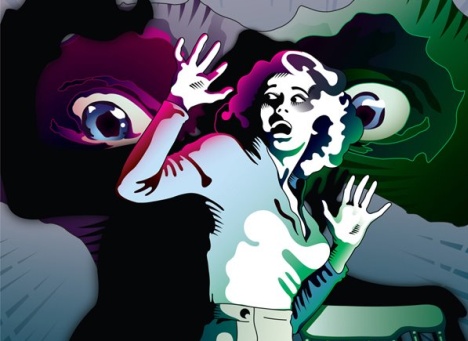 Surely, you’ve seen the now classic image of a woman watching a horror movie with a man in a darkened theatre — she watches the events on the screen with a pensive expression, sometimes burying her head in her date’s shoulder (and of course the man chuckles and seems to enjoy it). The image is an old one — long perpetrating the idea that women do not like scary things, and in fact need the help of a man to tolerate them.

Allow me, then, to introduce you to an entirely different type of woman: a woman that not only would never dream of covering her eyes with her hands for the gory parts, but in fact seeks them out with relish, begging to be not only frightened but terrified. That type of woman would certainly seek our survival horror titles that provide not only scares that affect the physical, but also the psychological — for this is the heart of where the best scares come from.

Series such as Silent Hill have been praised for their achievements in providing a frightful experience in both of these ways, and I’m here to tell you that while the woman in the theatre may be the archetype when it comes to women and the way they react to horror, there’s a new breed coming down the pipeline.

Maybe you’re complaining at this point, ladies, because I’m making you feel like you aren’t very brave. And you know what? You’re right. You aren’t. Not only are you cheating yourselves of one of the best gaming experiences that is available to you, but you’re curtseying to that old stereotype. Maybe its not just ladies I’m speaking out to, in fact — some men are too shaken up to play survival horror, too.

While the shmup genre forces a player to succeed by honing his or her skills to a point of almost surgical precision, survival horror asks for a very different approach: nerves of steel and patience. These are not fast-paced games, often relying on long, slow periods of exploration to further the story, and often forcing your character through grueling fights with nothing better to defend him or herself with than an old plank wih a nail through one end. Turn up the difficulty, and it seems almost hopeless to think that one can survive.

What about this would appeal to a woman?

Allow me to show you.
Now a classic scene in Silent Hill history, the “rape scene” from Silent Hill 2 may turn off a woman seeing it for the first time. After all, rape’s kind of a touchy topic. When I saw this scene for the first time, I was simultaneously fascinated and revolted, specifically because before it, I had never seen anything quite like it in a videogame. I needed to understand what it was that Pyramid Head was doing to those mannequins, and even before I really grasped it, I sensed that it had less to do with him and more to do with the character I was playing — an encoded message that I have to find a way to decipher.

It’d be easy to turn away from a game like Silent Hill 2 at this point, having been disturbed by a turn of events that’s clearly more than just a cheap scare. Not that I have a problem with cheap scares — they serve their purpose, and sometimes I enjoy them. But a scare like the rape scene has deep resonance. It still sits firmly in my consciousness some seven years after playing it for the first time, and its things like that that make me know that if other women could muster up the bravery to enjoy the game as I have, they might find a pretty formative experience waiting for them beneath all the ghoulies.

Of course, some people just don’t like to be scared. And you know, that’s fine. I’m sure as hell not going to be talked into playing Halo 3, because I don’t care for those kinds of games. No, this monologue is more directed at the people hovering at the edge, the ones that say “Oh, I’d like to play those games, but I’m too afraid to try them.”

Playing these games, and therefore directly facing the horror they contain, is not only brave in the sense of the gaming experience, but extends beyond that. A person brave enough to face the horrors of a series like Silent Hill can perhaps stand in the mirror and face his or her own reflection with courage, even if they don’t like what they see. I touched on the idea in another recent article that  the experiences we have in games can have a very real effect on our real lives, and I dare to mention it again — steeling your nerves against fictional horrors may very well prepare you for some of life’s real ones.

Beyond all that, though, there’s something truly delicious about getting home with a solid horror title in one hand, turning down all the lights, tweaking your surround sound to the perfect levels, and getting good and scared. It’s completely safe. The worst it can do is give you nightmares or make you jump at shadows, and that isn’t going to kill you. At its best, it makes you feel incredibly alive and engaged in the gameplay experience, and it can provide some of the most genuine immersion I’ve known as a gamer.

The scene below in which James reads Mary’s letter in Silent Hill 2 (major spoilers, btw) and faces the truth of what he has been running from (and running to, I suppose) is an ideal example of the reward a player gets for their courage and tenacity. Sure, its been hard and frightening to get to this point, but in exchange we are given a scenario so real and so shocking to face that it’s all but impossible to be completely drawn in. Many fellow fans of the series have admitted to crying during this scene.

Because of all these reasons, a gamer who admits to playing survival horror games with relish earns my respect, for multiple reasons. A female gamer who admits to the same earns it doubly so, because we have decades of stereotypes to go up against. Yeah, I could play a pink DS and enjoy Nintendogs with gleeful abandon, and there’s nothing wrong with that. I have done that, in fact. But a girl who says she enjoys nothing more than to plow through the often disturbing mysteries of a game like Silent Hill or Fatal Frame — well, she’s turning the stereotypes right on their asses. And I kind of like that.

So do it — be willing to make yourself a little uncomfortable. Push your boundaries. You might find that what you get out of it was worth the journey. Sure, maybe your nerves will get a bit tweaked on the way, but people have been flocking en masse to haunted houses for countless years, seeking that elusive something that I can now march the store and buy in the form of a videogame, and utterly lose myself in the experience of each and every time. What a remarkable thing that is — I don’t think I’ll ever stop being thankful for it.