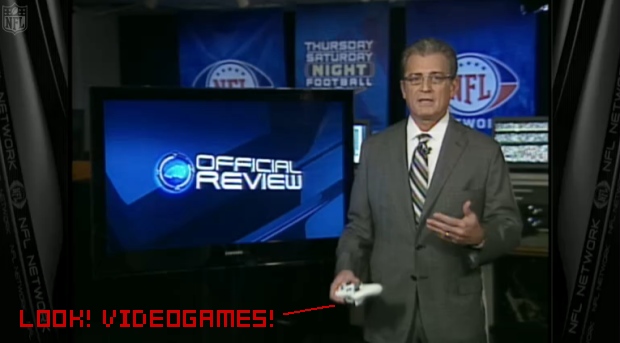 I dug this out from our “Late Night Sunday Post” file, but figured it was random enough to post. An ESPN viewer over at Kotaku was watching Mike Pereira, the NFL’s chief of officiating, on ESPN during Pereira’s weekly rundown of controversial plays, when he noticed that the man was controlling all his replays with a 360 controller. Now, it’s probably just a 360 controller for Windows as the producers most likely run the entire thing off a PC and that was the easiest way to control it all, but I like to think there is a bigger conspiracy here.

We’ve been watching a game of Madden every Sunday for the past four years. They’ve got a super realistic looking Madden that they’ve kept secret so that the NFL can make more money. See, instead of paying all the players they simply pay two people to play the game. Instant profit. When you go to a game you’re just watching holographic projections of the Madden game. Thus, these replays have to be controlled from a 360 because that is what they were developed on. It makes sense people. I’m not crazy!