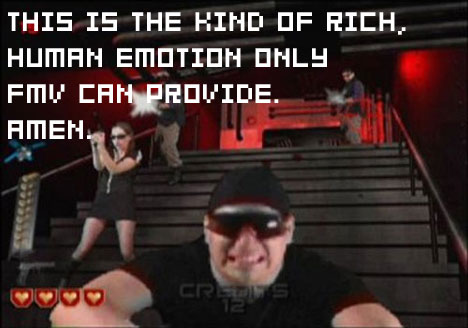 Everyone likes a little “pew! pew!” now and then, but one would be hard pressed to ever want to turn to Target Terror, the Konami published light gun shooter for the Wii. Originally a hilariously bad 2004 arcade game, it was re-released for the Wii … two months ago (because we needed that).

MTV Multiplayer’s Patrick Klepek caught up with the game’s designer, Eugene Jarvis, to talk a bit about the title. The videogame industry veteran had quite a bit to say about motion capture in games (he thinks it’s totally awesome), 9/11 (it’s story is “so rich in action, destruction, death, heroism, megalomania, patriotism, and paranoia that it begs for a videogame to be made.”), and a Target Terror sequel.

“We’ve been working on fleshing out the storyline,” he told Klepek in an email. “I can tell you that the heavy s**t is going down in Vegas — the action is going to be Apocalyptic. And yes you can still shoot ‘em in the nuts!”

Yes, there’s going to be a sequel to a game that has a Metacritic score of 37 out of 100. Well, at least Beyond Good & Evil is finally getting a follow up, right?