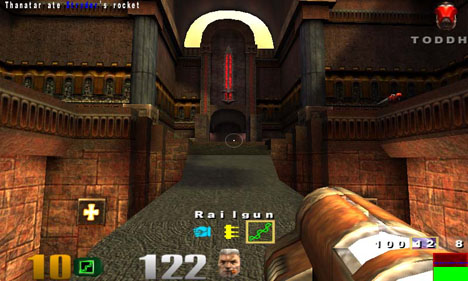 Quake 3 Arena for the Xbox Live Arcade was announced at QuakeCon 2007, so it makes sense that people are wondering where the hell it is. Well, the wait is just about over, says id Software’s John Carmack.

He recently told Joystiq that they are “actually very close to finishing up,” though he drops no specific dates. It’s not like they have to rush, though. It’s not exactly a new game. Destructoid Contributor Adam Dork responds: “It is nearing completeion….and then it needs MS certification so…2010?”

In related news, Quake Live, the PC broswer Quake-based productivity killer, is supposedly live. It doesn’t seem very live this morning. It seems that the servers are being spanked by the F5 button.

Hey, who played this on the Dreamcast? [raises hand]

[Update: Apparently there’s a Twitter for the game. Get in line: 113,000 have signed up, according to the feed.]