Our ears perked up when we heard that a new Xbox 360 title was coming from the Sweedish developers behind the GTR and RACE line of PC games. SimBin’s upcoming RACE Pro will be their console racing debut, with the team opting for simulation over arcade action.

We had the chance to speak with Diego Sartori, Creative Director from SimBin, on their new title. We talked about what kind of cars, tracks, and game play we can expect from RACE Pro, making sure to ask about hot topics like damage modeling and fair online multiplayer.

Read on for our interview.

Destructoid: As you come from a simulation background, how do you think fans of other Xbox 360 racers like the Forza or Project Gotham series will compare the control types and  gameplay. Will RACE Pro be less ‘arcadey’ and more complex?

Diego Sartori: On a personal level I think it is hard to do a direct comparison between the mentioned games. One is a car game and the other a racing game.

The controller interface in RACE Pro has been designed to cater to as many players as possible. We acknowledge that players have different preferences and different driving styles and therefore the players have to be able to adjust controller settings. The analog sector feature and the global steering lock feature should ensure all players are able to configure the game to their liking.

Being more focused in reality, does RACE Pro help new racers learn the basics of racing? Is there any in-game instruction on how to properly maintain racing lines, for example.

In RACE Pro, the loading screens always feature a track break down with information of key areas of the track being loaded. In addition to the track information, the loading screen also features important information on practice tips, racing tips and basic racing understanding. We have tried to touch as many areas of interest as possible and if the player takes time to read and follow the instructions on screen, there is something to learn and improve on, even for the seasoned players.

How many cars can we expect RACE Pro? From what makers?

Can these racing-geared vehicles be customized and tweaked?

RACE Pro does not feature customization as certain other games do. It does however feature a very extensive car setup section where all aspects of the car can be adjusted. The cars in RACE Pro respond to setup changes as you would expect their real life counterparts to respond.

In racing, will the cars reflect damage or wear?

Yes, RACE Pro features damage and tire wear. The damage system allows the player to configure how sensitive the cars are to damage. The range goes from off to realistic damage and while playing the game with the realistic damage setting, collisions can result in terminal damage to the car.

The damage system is a mix of visual and physics damage where bend suspension and loss of parts are supported. RACE Pro also features tire wear and heating. It will take a lap or so before the tires provide maximum grip and the tires will wear out during longer races.

The tracks are all real world locations, right? How many will there be, and what locations can you reveal now?

How does the single-player campaign mode work? How are new vehicles acquired?

In order to un-lock all the cars in RACE Pro, the player must play through a career mode featuring 20+ contracts. The career mode is based around the real life principle of try outs and stand in races. To access a contract, the player can take part on a try out and if successful acquire the contract at a reduced cost.

The player can also purchase their way into their chosen contract but doing so will cost a great deal more than through a successful try out. Stand in races offers the player the possibility to race un-locked cars as well as a way of earning some extra credits. In real life, a stand in occurs when the contracted driver is unable to perform his duties forcing the team to call in a substitute driver. 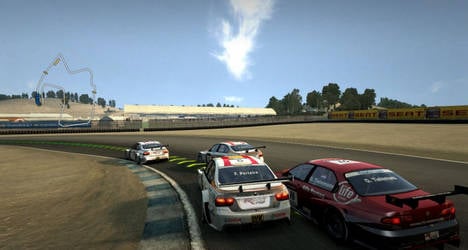 The controller-passing Hot Seat mode sounds pretty interesting. How does that work?

Hot Seat is our alternative to split screen. Early in the design process, we decided that we wanted the players to be able to share a full screen experience rather than the often used split screen mode. Hot Seat mode can be played in competitive mode or co-operative mode. In competitive mode, two players race head to head, and the session can be setup to feature AI opponents. When player A is in control of the car, the AI is driving player B’s car, the game will communicate when it is time for a player switch and during the switch take control of both cars, once the allocated time for a player switch has passed, active control is given to player B.

The Hot Seat session can be configured in exactly the same way as a normal race including how long each “turn” is. The game allows both players to use identical or individual settings for driving aids and driving view as well as controller configuration during Hot Seat sessions.

Co-operative mode works exactly like competitive mode; only here the players share a car while competing with the AI opponents.

RACE Pro supports online multiplayer. What steps are being taken to ensure races are fair for all players?

In order to avoid wreckers, RACE Pro will disable collisions to the player car if the player drives against the “traffic” or stops on the track. The approach is used if a player accesses the pause menu during game play.

Drive through penalties and disqualification will be issued should a player fail to abide by the racing rules or cut the track. It is impossible to avoid accidents happening and near impossible to flush out players entering a session with bad intentions. Xbox Live however features tools that if used properly can help prevent wreckers from constantly destroying races.

Yes, I most certainly do and I look forward to sharing more information on what is to come at a later stage