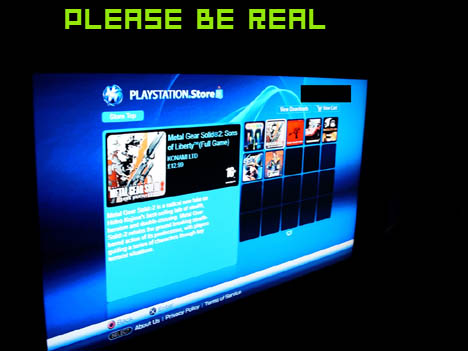 God, I hope so. Sure, there’s plenty of PSOne hits we’ve yet to see, but I’ve really been hoping for some PS2 downloads. You all know good and well that the system could pull it off. It was just a matter of waiting until Sony had it ready. So when?

While not official, the above picture gives me hope. This little gem comes from the N4G boards, where a board member claims this shot came from a Sony London employee. He says that a new PlayStation 2 Store will be announced at E3, and its launch is marked for late summer. And it’s supposed to launch in Europe!

Of course, none of this is confirmed. But the screenshot looks real enough. If you squint (or use the larger one in the gallery below), you can see Metal Gear Solid 2, Fantavision, The Bouncer, Ridge Racer V, Smuggler’s Run, Red Faction, and SSX. The highlighted selection, MGS2, lists for £12.99.

This line up, while pretty nice, reminds me of the current PSOne lineup: all early games. I’m not complaining, though.

Do you think this is legit? What other games would you like to see on PSN? What do you think about the pricing? Do you think these new selections are related to the recently cut backwards compatibility in the PS3?