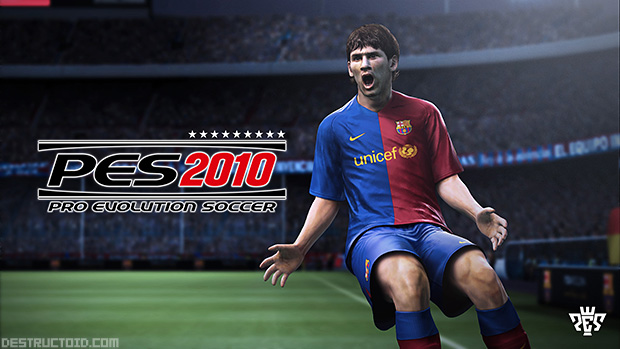 Americans might not care much for soccer, but the sport is kind of a big deal everywhere else in the world, where rabid fans wait with bated breath each year for the announcements of their beloved soccer games. Konami beat EA to the punch this time around — today, they announced that Pro Evolution Soccer 2010, this year’s iteration of their long-running fútbol franchise, will be out this fall.

The first screenshot from the game can be seen above (check the gallery for a larger one), and there’s a rather long press release after the jump. For many years, PES was regarded as a better soccer sim than EA’s FIFA series, but the perception has flipped recently, especially with last year’s stellar FIFA 09. PES has some catching up to do, and it seems that Konami realizes that.

Last summer, EA came right out and promised “over 250 additions and enhancements to core gameplay” in FIFA 09, and EA Canada was able to deliver. The press release announcing PES 2010 explains that the dev team, PES Productions, evaluated feedback and “created a dedicated number of sub-teams,” each of which will focus on a specific area of the game. With improvements mentioned in key fields like gameplay, graphics, and AI, it appears that Konami’s going to try and strike back with a vengeance and reclaim PES’ throne. We’ll have to wait and see how it turns out.

Pro Evolution Soccer 2010 will be released on PlayStation 3, Xbox 360, PC, PlayStation 2, and PlayStation Portable — so once again, EA doesn’t have any challengers on the Wii. Finally, the press release also mentions that Lionel Messi will be involved in endorsing the game again, but he hasn’t been confirmed as the cover athlete yet.

El Segundo, Calif. – April 8, 2009 – Konami Digital Entertainment, Inc., announced today that its forthcoming Pro Evolution Soccer 2010 (PES 2010) title will include the biggest set of new features in franchise history, with every aspect of the game benefiting from key improvements. Following months of analysis and feedback from the fans, PES 2010 is scheduled for release on the Xbox 360® video game and entertainment system from Microsoft, PLAYSTATION®3 computer entertainment system, PlayStation®2 computer entertainment system, Windows PC and PSP® (PlayStation®Portable) system this Autumn with enhancements in every area of the game.

Konami’s development team, PES Productions, have collected positive and negative comments from PES players and the media and incorporated it into the new game. The result will be the most challenging, realistic and satisfying PES experience to date!

Konami has spent the last year expanding the development team’s capabilities, and created a number of dedicated sub-teams, each striving to further improve their respective parts of the game both in the short and long term. Key additions and improvements include:

Konami has strengthened its relationship with UEFA and can announce it has secured the exclusive video game rights for the Europa League License (formerly known as the UEFA Cup). In addition Konami will be enhancing and developing the use of the UEFA Champions League within PES 2010 to make even better use of the best club football competition in the world.

Konami has also confirmed that Lionel Messi will once again be a key endorsement player for PES 2010 and will be an active participant in the promotion and development of the game up through launch.

“We have been monitoring feedback and comments on the progression of the PES series for some time now, and PES 2010 will see us implementing a great deal of the ideas players have been requesting,” commented Naoya Hatsumi, Producer for PES Productions at Konami Digital Entertainment Japan. “We aim to make PES 2010 a more user-friendly, and immediate experience that places the emphasis on getting straight into the gameplay for which the series is famed. PES 2010 will look better, will play better, and will recreate real soccer as closely as the current hardware will allow.”

More detailed descriptions about new features and updates will be revealed in the coming months.