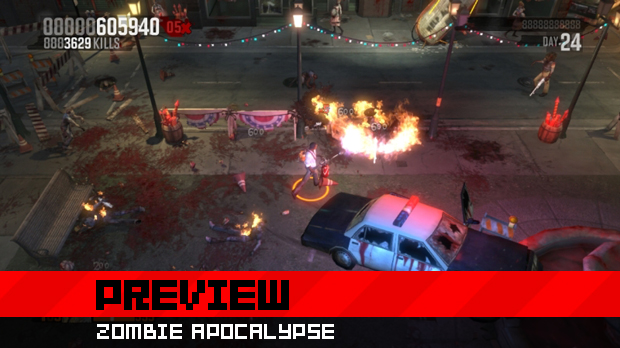 Zombie Apocalypse, to put it simply, is a four-player co-op, twin stick shooter that has players fighting off wave after wave of zombies in small enclosures. It’s basically Left 4 Dead meets Smash TV, which is a combination made of extreme win.

The videogame market is infected with new surge of zombie games to the point that I feel all these quick cash-ins are hurting the zombie genre. But Zombie Apocalypse stands above all the crap that’s been infecting the market and you can find out why this is so after the jump.

There are four characters for players to choose from at the start of Zombie Apocalypse. Once everyone was ready, we were all spawned in an airport-themed level and it wasn’t too long until the zombies started to swarm in from all directions. Each player starts off with a machine gun with infinite ammo and a chainsaw. Players will use the left stick to move and the right stick to shoot. Weapons such as shotguns, flame throwers and more will spawn in the maps with limited ammo every so often.

The chainsaw requires players to get up close in personal in two ways. The first way allows you to run around and chop apart everything that comes in contact with your blade. The second way is the execution mode where the player holds the chainsaw over their head until they make contact with a zombie, brutally tearing them up. Players also have a teddy bear strapped with explosives that will attract zombies to it, like the pipe bomb in Left 4 Dead.

After surviving a level, the day will be cleared and the group will move onto the next level for a new day. More zombie waves strike with each new day, making it harder and harder to survive. Two of the seven levels I saw had various explosive barrels and hazards, such as a spinning airplane turbine in the airport level. I couldn’t exactly figure out if you could shove a zombie into the turbine or not, so the hazards may just be for show if anything.

For every zombie you kill, you’ll earn points. The points determines who the winner is of the four people playing, and gives the game a coin-op arcade feel. I was constantly thinking of Smash TV while playing Zombie Apocalypse, to the point that I now want to hunt down an arcade that has Smash TV. Good news: Zombie Apocalypse is four-players both local and online.

Zombie Apocalypse is a simple mans Left 4 Dead. It was pretty addictive from what I played and reminded me so much of old school arcade games. If you like zombie games, then getting this is a no brainer.