I’ll come right out now and be perfectly honest with you — I don’t watch UFC. I have no idea who any of the fighters are, regardless of how ultimate they may be, and I have no idea why any of these people want to get into a big metal cage and start punching each other in the face. I was not the right man to send for this preview, but I was the only man.

So, how does UFC 2009 Undisputed rank for a gamer who actually doesn’t care about UFC? Surprisingly well, actually. THQ has taken what it’s learned from years of producing WWE games and created a simple yet surprisingly robust and deep combat system that actually helped to make me just that little more interested in UFC itself. Read on for our preview of UFC 2009: Undisputed. 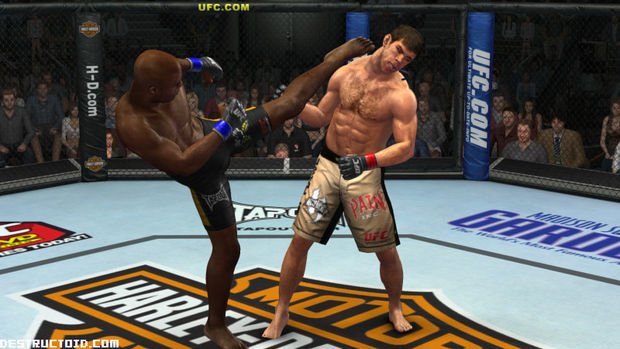 There’s not much about Undisputed that its followers don’t already know, so I would mostly be retreading old ground and boring you by regurgitating the details. Let me instead skip the roster, the career system and the classic matches by focusing on the most important thing:

YOU CAN PUNCH SOMEONE IN THE EYE UNTIL IT GETS ALL BIG AND BLEEDS!

This is the reason why I found UFC 2009: Undisputed surprisingly good fun. I don’t have a clue about performing half-guards and mat slams and all that bollocks, but I did learn how to tackle someone and then just smash their face into a purple, pulsing pulp. This is the true beauty of UFC — the real-time damage is absolutely fantastic. 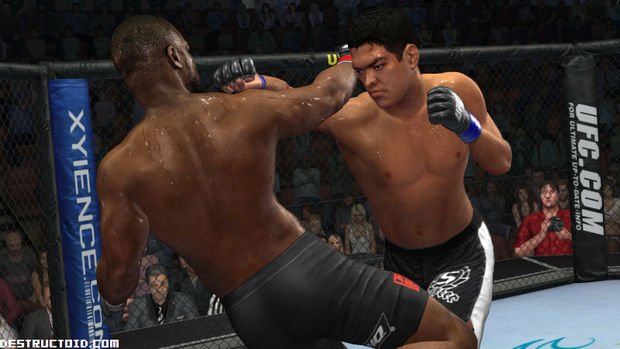 The more you attack one area of an opponent’s body, the more it will begin to bruise and swell, something you can see for yourself if you download the demo. The subtle progression from slightly red to absolutely destroyed is impressive, with discoloration, welts and rather nasty looking gashes slowly making themselves known. The injuries are realistically rendered and the cuts are especially painful looking.

THQ is using the well-worn adage of “easy to learn, difficult to master” to describe Undisputed‘s gameplay and as someone who could never be described as a master of fighting games, this is indeed true. The demo lacks the helpful tutorial found within the main game, and after a quick blast through the training sessions, I was able to accrue enough skill to smash eyes until my opponents were knocked out good and proper, even taking on a few human adversaries and coming out on top. 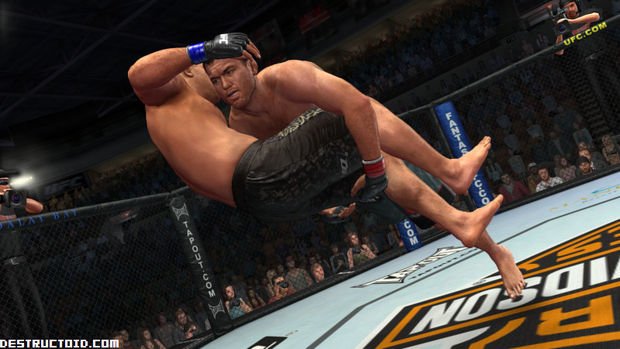 The controls are a little different from THQ’s WWE games, but a couple of matches will have you getting used to rotating right sticks and successfully taking opponents down to the mat. The attack commands are all rather simplistic, with strikes varied with different analog stick movements and shoulder button presses. Particularly tough fights can also be quite physically grueling on players themselves, with plenty of button hammering and stick wiggling required to compete in what feels like a violent tug-of-war contest with the opposing player.

Another interesting aspect of Undisputed is how, just like real-life fights, the whole thing can be over in a matter of seconds if you land the right bunch at the right time. I got to witness one lucky player get a five-second KO and end the match. As fights wear on and each fighters’ stamina begins to drop, a bout could end at any second, leading to some tense matches where players know they’re putting victory on the line with each move. 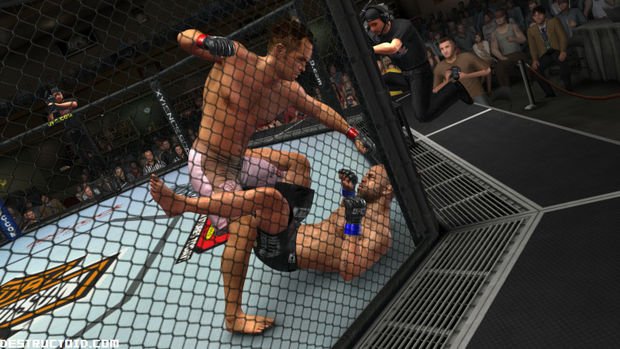 On the subject of stamina, THQ has done a really good job of eliminating HUD detritus from the screen. We already talked the physical damage that characters can incur, which works incredibly well to give players a visual idea of how the right is going, and as fighters get more weary, they begin to look more tired, unable to maintain a more energetic fighting stance. At times, the referee will also get in close and inspect a fighter, showing that he might be in serious trouble.

I don’t want to make this a lengthy preview since a demo is up and we’ll have a full review coming soon. Let me just say, however, that UFC 2009 Undisputed is something that fans of the sport will definitely love, and it may even tempt newcomers into checking it out much more. It’s a solid title so far and manages to be good fun for newbies, while tougher battles will be there to keep hardcore fans playing. Do download the trial and check it out. It’s quite a bit ultimate.