If you would so kindly remember, a few years back Rockstar released a brawler based off the 1979 film, The Warriors. Widely well received, the game offered a fresh appreciation for the violent film. Since the 2007 release of the PSP version of that game, we’ve heard nothing on The Warriors as a videogame franchise.

Well, it looks like the Warriors are back, but this time, Rockstar is far from the project. Instead, Paramount Studios has taken the initiative, and The Warriors Street Brawl is now an Xbox LIVE Arcade and PlayStation Network title. It’s the 30th anniversary of the original film, and developers CTXM and Paramount Digital Entertainment hope to do the franchise justice.

We check out the game at Comic Con, but hit the jump for my updated impressions.

Like Dale said back in his Comic-Con preview, The Warriors: Street Brawl is a co-op, four-player brawler, with a typical story mode, a harder arcade mode, a boss battle, and a versus mode, all designed with Final Fight or Streets of Rage in mind. Besides the typical punch/kick, you’ll have a rage mode that grants temporary invincibility, a character specific special attack, and a combo system that builds on the special meter for special moves. Combo system is simple and clear, but can be pretty damn satisfying pulled off. Holding a baddie while your buddy pummels him is pretty great. 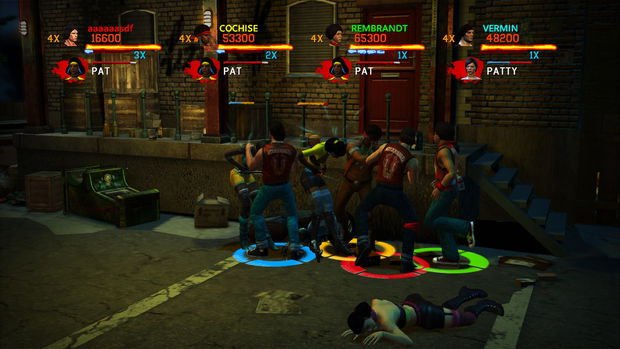 Weapons and pick-ups in the game are all based on the movie, so slung-locks, baseball bats, knives, and pool cues are here and accounted for. As are the gangs — everyone from the Baseball Furies to the Lizzies are accounted for, and ready to be beaten.

Audio is an area that worries me a bit, however. There is no voice acting in the game, with the plot told over static comic-book style story breaks between levels. In game, there’s absolutely no music. [edit: Looks like there is some confusion. What I mean is there is no music during the actual street brawling. While the audio during the menus, boss battles and timed fights are great, much of the experience is a little on the quiet-side, other than the grunts and thwacks.] Sure this is an XBLA/PSN game, but some musical component would make the experience that much more.

While I’m concerned that the lack of audio dilutes the experience, I do have to say I’m pretty cool with the graphics. Each of the characters, from Snow, Ajax, and the whole crew (including unlockable characters) are designed down to the red/orange leather jackets and native American costumes. Each level (of which there will be 21, with seven missions) looks pretty great, from the hideouts and subways stations to Coney Island, The Warriors’ home turf. 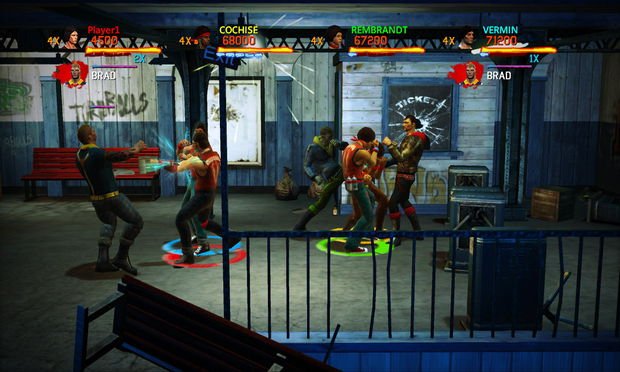 Plotwise, the game covers the entirety of the 1979 film, so don’t expect anything new in that department. Considering the insanity of the original film, I doubt it’s too much of a bad thing.

Ultimately, the impression I get from this game is that it is a product that hearkens back to the old school beat ’em ups, a genre that has been unfortunately looked over as of late. With promise of some downloadable content (limited strictly to levels), as well as jump-in four player co-op, I don’t necessarily see this as a bad game. While I’m concerned about audio issues, hopefully this will not be a deal breaker for the fans of the genre.

It looks like the $10/800 Microsoft points is a good price point for the four to five hours of gameplay. Definitely check out the demo when it is released next week for Xbox Live Arcade, and for PSN later next month.