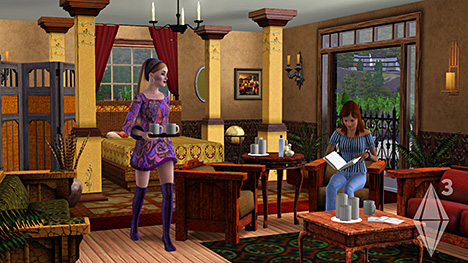 I often lament the fact that I don’t have a gaming-capable PC, but to be honest, I’m very glad that I don’t own one for some things. EA’s The Sims franchise is one of those things. I could easily see myself whiling away my days and nights, glued to a computer monitor, stealing random objects from people’s houses.

“Wait, what?” you may be asking. Oh, that’s right — I haven’t yet explained the all-new trait system that’s the foundation of your Sim’s personality in The Sims 3, which was recently delayed to June 2nd. Follow me to the jump: there’s so much to discuss about the changes that EA Redwood Shores — not Maxis — is bringing to the best-selling PC franchise in history (three core games, including The Sims 3, and fifteen total expansion packs for The Sims and The Sims 2). 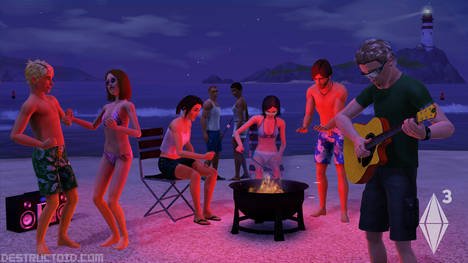 I was given a demo of The Sims 3 by Grant Rodiek, an Associate Producer on the game. He told me that while The Sims 2 was certainly a great game, the main problem with it was that the Sims themselves were too needy. They needed constant monitoring, or they’d soil themselves — the game became more about keeping the Sims alive, as opposed to watching them live their lives. So the aim with The Sims 3 was to move up Maslow’s hierarchy — to “move past peeing,” as Grant put it.

To that end, two of the previous game’s eight needs have been excised; comfort and environment have been replaced by “moodlets,” which are special events that will have a temporary effect on the Sims’ behavior. You can allow the world to just take care of itself — Sims will eat and excrete on their own. Instead of needs, The Sims 3 focuses on two major areas: personality and customization. Five “traits” will determine the personality of a particular Sim (toddlers: 2, children: 3, teens: 4, young adults: 5), and there are over eighty of them to choose from. Some of them are pretty standard (Charismatic, Vegetarian), but many of them are whimsical and make for fun (often comical) game scenarios. 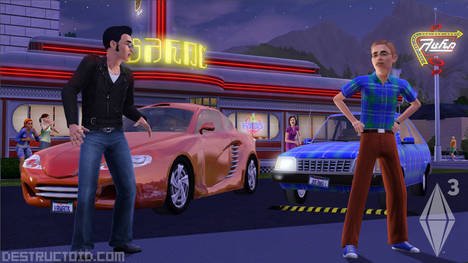 For example, one of the Sims in Grant’s house was named Jenna Arlenby; two of her traits were Evil and Kleptomaniac. When she was alone at a neighbor’s house, one of her actions was “Steal…” — Grant picked it, and explained that she would run off with a random object from the room. When I was watching, she took a table; earlier, she had pilfered some curtains. Once they were stolen and brought back home, Jenna was free to use the objects (or get rid of them for some Simoleons). Another hilarious trait is Loser. If your Sims have this trait, when they die, Death will feel sorry for them — so they’ll be reborn.

Based on your Sim’s personality traits, you’ll be given a list of five “lifetime wishes,” of which you can choose one (there are about thirty possibilities). These are also tied into your choice of 12 different careers. Each career has its own associated rewards and promotions. By succeeding at your job, you’ll get reward points that you can put toward things like “lifetime rewards” — for example, writers could become Acclaimed Authors if enough of their work is published. 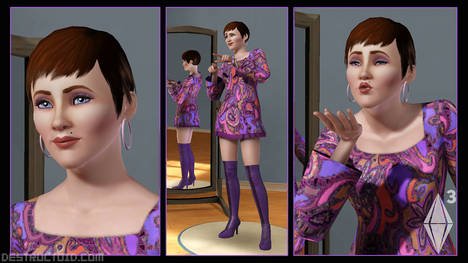 Jenna had a fraternal twin sister, Sarah, who was your prototypical “starving artist.” When we came across her, she was playing her guitar in the park. Her room back home had an easel, and her paintings adorned the walls. Your Sims’ personality traits will influence their art in The Sims 3 — if your Sim is a Dreamer, his painting might look more like Starry Night or The Persistence of Memory, but if she’s a Genius, the art might be a still life.

Customization of your Sims is also more robust than ever in The Sims 3. The Create-A-Sim interface can output an endless variety of Sims, thanks to improvements like being able to select shoes separately from pants, and fitness bars to build wiry or obese Sims. You won’t just be limited to four hair colors anymore — now you can edit the colors (going as deep as using hexadecimal or RGB values) of the body of the hair, the roots, and the tips; highlights are also an option. And the face editor now has Top Spin 3–style face points to nail your likeness perfectly.

If you want to have a theme with your clothes (or anything else), you can use custom styles. Say you’ve create a particular pattern or color scheme for a T-shirt that you like. You can save that style — and then apply it to anything. If your shirt is white with yellow polka dots on it, your bedroom walls or your car can look just like it! 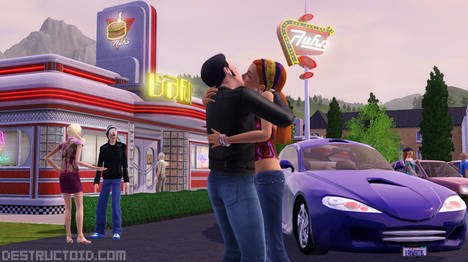 That’s not all, though; the build and buy modes have gotten an overhaul as well. The square tiles that make up the grid in build mode are now one-fourth the size that they used to be, allowing for more precise placement. And at long last, the game has the built-in ability to rotate objects freely (360°), and they can even be placed between two tiles! Half-tile placement is obviously something that will completely change the complexion of the game — perfect symmetry is now possible when placing a TV set in front of a two-seat couch.

Last but not least, neighborhoods are now completely seamless, and the same time applies to the entire town. No longer will you have to suffer through a loading screen when switching lots; it’s all one open world that’s free for you to observe at the macro and micro levels (and everything in between). This is easily the most significant change when it comes to viewing your Sims, and it was accomplished even as the game’s visuals were improved. 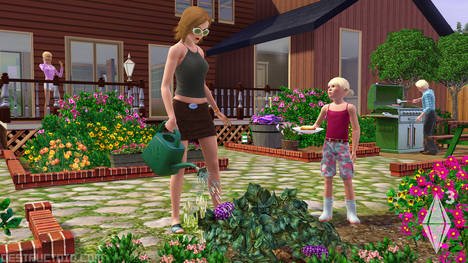 There are all kinds of other minute, humanizing details — evil Jenna, for example, had a special contextual action when using the computer: she could troll forums! The game also offers detailed stat tracking, in case you want to see how many plants you’ve harvested from your vegetable garden. The Sims 3 is a sure-fire hit: it contains upgrades and additions that longtime fans of the series have been clamoring for, and it makes it easier than ever for newcomers to get hooked. I think I’m going to delay my purchase of a new laptop until long after the game’s release date, June 2nd, so I won’t be tempted to pick it up.